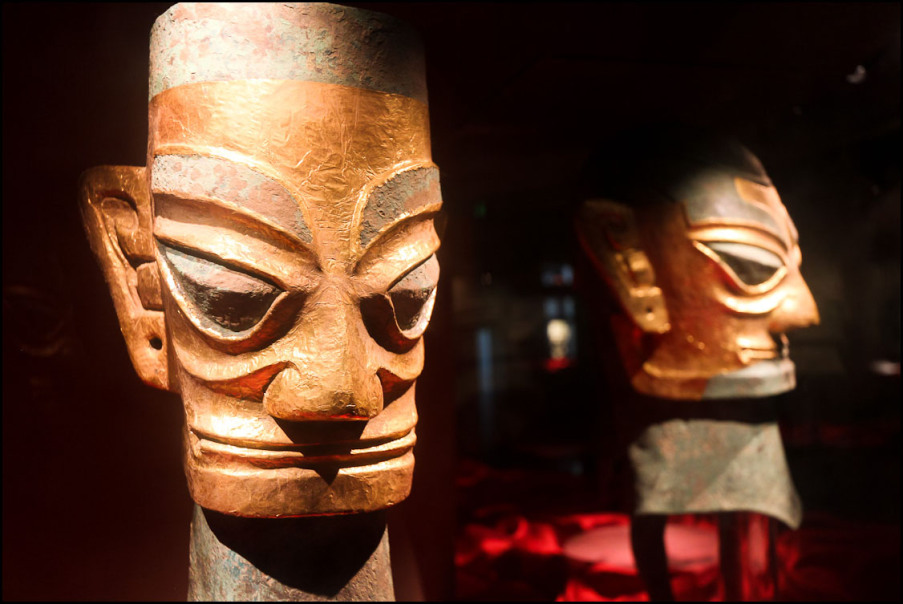 Some people have said that the strange bronze masks & other fantastic objects found at Guanghan Sanxingdui near Chengdu in Sichuan province provide evidence of alien visitations.

How else to explain the wonderful, utterly mysterious artifacts that have been found there?
Where did this creative civilisation that flourished between 5,000 & 3,000BC, come from and where did they go? How did they create such intricate bronzeware, jade and gold ornaments….and what for?
Why did they leave no written records and why is there no mention of them in the records of other cultures?

In the thirty years since the excavation began very few of these questions have been answered, and guides at the vast archaeological park are honest enough to say so. The discoveries have confounded archaeologists and forced them to rewrite ancient Chinese history – it was never imagined that such an advanced culture existed outside the Yellow River valley, which was believed to be the sole birthplace of Chinese civilisation.

Excavations are continuing but answers seem to be lost in the mists of time.

The foundations and remains of a vast city have been found, along with three sacrificial pits. It seems that the relics were systematically broken and buried in these pits, and still no-one knows why.

Pieces discovered so far include:

The largest bronze sculpture in the world – a 4-metre high tree.

Two of the earliest gold wands – 1.42 metres in length and weighing 700 grams each.

Over 1,000 pieces of bronze, jade, gold, pottery, ivory (including elephant tusks from Thailand) and seashells (5,000 from the Indian ocean). One of the 20 weird bronze masks with protruding eyes, slit mouth and huge ears. Did this sit on the top of some kind of Totem pole? It is the only one with protruding eyes. Others with almond-shaped eyes were also too big to be worn – one is 40 cm tall, and another one found in fragments, was 80 cm. They would possibly have been wrapped around trees or poles. Maybe the huge eyes and ears signal some sort of super-human ability to see and hear. An enlarged replica of the ‘standing man’ bronze statue

The unique bronze statue with his over-sized hands, bare feet and intricately carved robe. His face is solemn and expression inscrutable, reminding me of the serene stone faces at The Bayon temple at Angkor Wat. Was he carrying an elephant tusk? He seems to be wearing a sun-crown: is he a king or a God? What kinds of rituals or sacrifices did this figure witness? Who was the model for this and the other heads found here with their elongated necks, over-sized almond-shaped eyes and slit mouths? 80 relics of human-type figures in various poses have been found so far, and they pre-date the Terracotta warriors in the tomb of the first Emperor of the Qin dynasty in Xi’an by a thousand years. Largest bronze tree in the world

Some archaeologists think the civilisation practiced Sun and Tree worship, and there are also hints of human sacrifice as well . The spectacular largest bronze tree contains twelve branches, with strange birds or fruits on the tips, and a dragon at the base – an intricate and delicate structure.

If you want to find out more see:

If you find yourself in Chengdu I would recommend a visit to the Sanxingdui site – an absolutely fascinating day out.
And don’t miss the Jinsha museum, another worthwhile half-day visit.

In this article:aliens, Guanghan Sanxingdui, masks