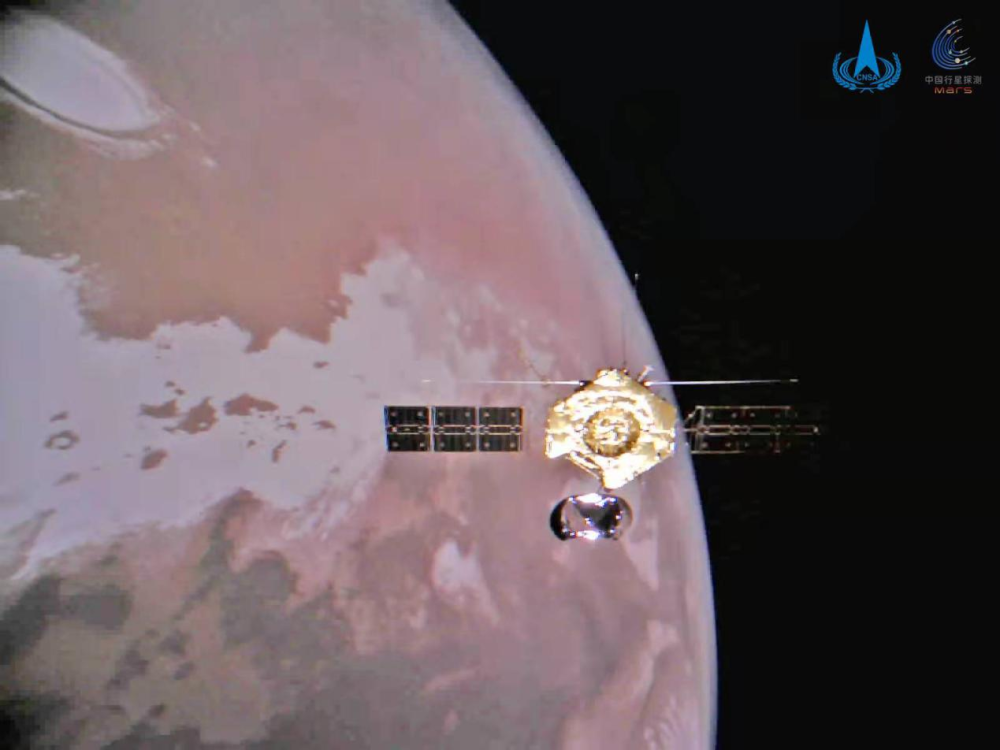 In honor of the New Year, China’s National Space Administration has released four new photographs of Mars. They were made by the Tianwen-1 probe, which has been operating on the planet since February 2021, together with the Chzhurong rover.

China’s National Space Administration has released new images of Mars taken by the Tianwen 1 probe. The images are posted on the management website.

A general photograph of the probe and Mars, a close-up of the Tianwen 1 orbiter, the planet’s North Pole Cap and the Chzhurong rover, which photographs the surface of Mars, are presented. The agency decided to release the images to assure that Tianwen 1 is safe and sound.

The frames capture the orbiter itself – it is golden in color, and part of the surface of Mars. In addition to the polar ice caps, consisting of dry (solid carbon dioxide) and water ice, you can see the Korolev crater and the Olympia dune field.

In the image with the rover, you can see the typical relief of the planet.

It is noted that the orbiter and rover are working normally and are in good condition.

As of December 31, the Tianwen-1 orbiter has been operating for 526 days, it is located more than 350 million km from the Earth, the communication delay with it is approximately 19.5 minutes.

The rover worked on the planet for 225 Martian days (the average length of a day on this planet is 24 hours 37 minutes). During this time, it covered 1400 m. In total, both devices collected 560 GB of information about Mars.

Tianwen 1 was launched on July 23, 2020 as part of China’s first space mission to Mars. The launch was carried out using the country’s largest carrier rocket, Changzheng-5, from the Wenchang space launch site in the southern province of Wenchang.

The probe reached Mars seven months later, on February 10, 2021. It took the first photos on the way to the planet, they were published on February 5.

The orbiter explores the surface of Mars, its atmosphere, ionosphere and magnetic field. The head of China’s lunar program, Ouyang Ziyuan, reported that the main task of the apparatus is to detect possible signs of life on the planet.

Advertisement. Scroll to continue reading.
In this article:China, Mars