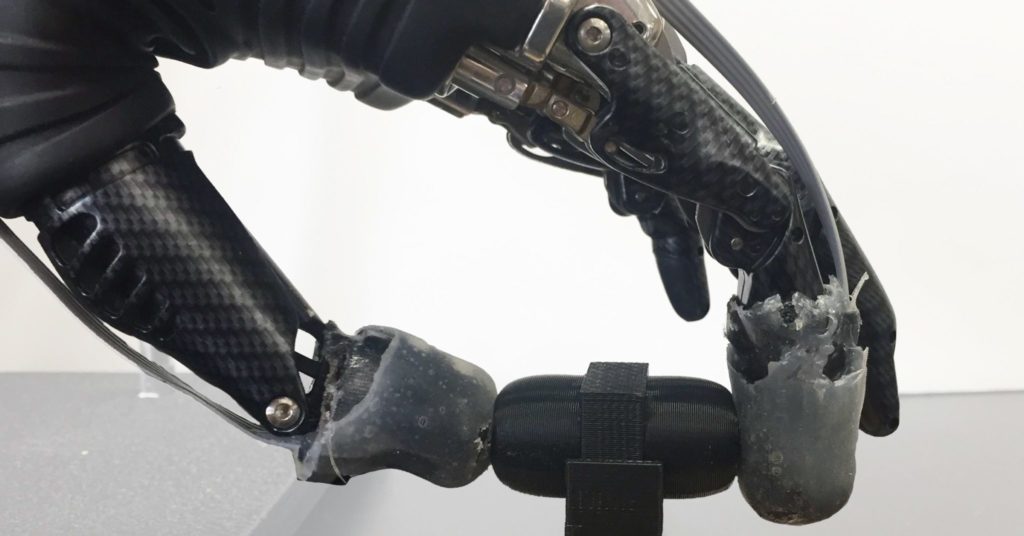 Pain is an indispensable tool for survival. The prick of a nail underfoot is a warning that protects you from a deep, dirty wound—and maybe tetanus. The sizzle of a steel skillet is a deterrent against a third-degree burn. As much as it sucks, pain, oddly enough, keeps us from hurting ourselves.

It’s a luxury that prosthetic users don’t have. But researchers report in Science Robotics that they’ve developed a prosthesis that can feel sharp pain and automatically drop a pointy object—in addition to telegraphing that pain to the wearer. Theoretically, that could one day lead to bionic limbs that detect pain in more detail, so amputees can better care for their devices. But is that something amputees, who already deal with uncomfortable prosthetics, actually want? That question, like the concept of pain itself, is surprisingly complicated.

The prosthesis, a modified Bebionic hand that’s already on the market, feels much like we feel. In your skin you have mechanoreceptors, which are good for feeling blunt objects, and nociceptors, which sense pain. Similarly, the fingertips of the prosthesis are coated with something called an e-dermis, which is made up of layers of pressure sensors. The top layer is primarily loaded with “nociceptors,” and the bottom layer is loaded with “mechanoreceptors.”

Give the prosthesis a curved object to pinch, and a whole lot of both sensor types will activate across the fingertips. Meaning, it’s blunt. “That gives you an indication that the object is what you’d call innocuous, or it wouldn’t be painful if you picked it up,” says Johns Hopkins biomedical engineer Luke Osborn, lead author on the paper. “With a pointy object, it’s a highly localized pressure when the fingers grab it, and so from the prosthesis’ point of view that’s something that’s more uncomfortable.” By sensing the distribution of pressure, the prosthesis knows something is wrong and automatically drops the pointy object.

Then the user gets the information—by way of a model that turns pressure information from the sensors into electrical signals, which run through electrodes that stimulate nerves in the wearer’s upper arm, where the prosthesis is attached. “The reason that works is we have peripheral nerves that go through our body,” says Osborn. “They convey the sensory information back to our brains. And even though somebody has had an amputation—the ends of those nerves may have been cut off—the nerves are still connected to the spinal cord, which is then connected to the brain.” Thus the test subject can feel pain in a limb that’s not there.

The feeling, though, isn’t exactly what you’d feel if you picked up a sharp object. “It’s like a steady growth of discomfort leading up to this localized sharp pressure, but there’s also some tingling aspect as well,” says Osborn. “Obviously the idea is to improve it to get to the point where it’s natural.”

It’s not obvious to everyone, though. “It’s interesting, pain is something we’ve always tried to avoid providing to our amputees,” says Cleveland Clinic neuroscientist Paul Marasco, who researches prosthetic technologies but wasn’t involved in this research. Amputees don’t just have to deal with the pain of the injury itself, but the pain of wearing a device that can be … less than comfortable. “So this is an interesting thought. It really sort of forced me to think about what actually leads to the richness of the sensation that you feel every day. It’s just like spicy food: It hurts, but it’s good.”

Couple problems here, though. For one, doctors aren’t supposed to dish out pain. “A lot of what we have to physically write into our protocols is that we’re going to do our best not to cause pain,” says Marasco. “Now, from an ethical perspective, where does the line between OK and not OK lie?”

Osborn’s study did go through proper review before it started. “We set up these experiments very carefully and wrote up the protocol to get reviewed by the institutional review boards, so we make it very clear that we’re not going to do anything that’s going to damage the volunteer,” he says. Volunteers could stop at any time, and there was a clear limit on how much stimulation they could receive.

Which brings us to the second problem: Pain is a notoriously subjective experience. This particular “feeling” prosthetic takes discomfort and turns it into ones and zeroes, but the person attached to those mechanical fingers will still have a distinct experience if they’re hooked up to a system like Osborn’s. So if you were to develop a commercial prosthetic limb that could feel pain, you’d have to carefully tailor it to the wearer’s tolerance.

That is, if the wearer would want to feel pain in the first place. “I get the idea of having some type of notification via prosthesis that you’re damaging the device,” says Angel Giuffria, aka the bionic actress, who has studied stigma against amputees at Southeastern Louisiana University. “Does it necessarily need to hurt? No.” She adds, though, that because the researchers reproduced pain non-invasively and on a commercial device, this could lead to more natural sensations in prosthetics.

But maybe there’s another way to telegraph that the user is inadvertently damaging their prosthesis: a light, or some other stimulus. But part of the benefit of pain is its immediacy: The sensation of a burning pot handle is so shocking that you have no choice but to reel away. Maybe pain has to feel terrible to work.

But we’re getting ahead of ourselves. Robotic prostheses have come a long way—Giuffria can put on her bionic arm and shake your hand. But she can’t feel herself shaking your hand. Commercially available prostheses don’t provide feedback. (Lots of R&D, but no availability, alas.) “Currently I have no feedback of any kind,” Giuffria says. “The only way I know how hard I’m holding something is because I’ve practiced, whether on pinching myself or holding an egg.”

So it will take a while longer for bionic limbs to provide users with robust feedback, let alone pain. And those sensations will need to be tailored to individuals’ needs. “If you lost one foot to vascular disease, and your other one has compromised circulation, then definitely having something that could alert you to surface texture and heat could definitely help,” says Peggy Chenoweth, a below-knee amputee and cofounder of Amp’d, a resource for amputees. For others, though, reconstructed sensations might be confusing. “For congenital amputees, those who have never had the limb, it could really be disconcerting to all of a sudden be feeling sensations that you’ve never experienced before,” Chenoweth says.

Researchers are just beginning to explore how to make machines feel. The quest is as much about replicating the senses as it is about ignoring certain stimuli. Will the bionic limbs of tomorrow feel pain? It’ll probably depend on what the user wants, really. No pain, no gain, after all.

Advertisement. Scroll to continue reading.
In this article:prosthetic technologies