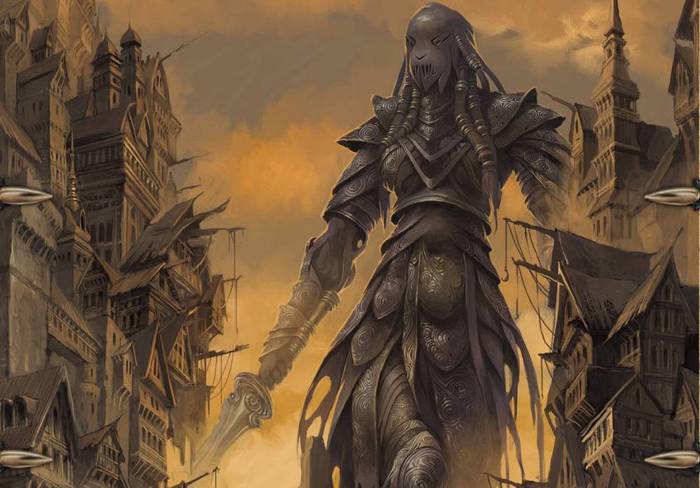 From the Mahabharata, an ancient Indian poem of unusual volume, we learn that someone named Asura Maya possessed a vimaana of about 6 m in circumference, equipped with four strong wings.

This poem is a treasure trove of information pertaining to conflicts between gods who resolved their differences using weapons that are obviously as deadly as those we can use. In addition to “bright missiles”, the poem describes the use of other deadly weapons. “Indra’s dart” is operated with a round “reflector”. When turned on, it gives off a beam of light, which, being focused on any target, immediately “devours it with its power.” In one particular case, when the hero, Krishna, pursues his enemy, Salva, in the sky, Saubha made Shalva’s vimana invisible. Unafraid

Astra – means weapons of mass destruction and many other types of terrible weapons are described quite authentically in the Mahabharata, but the most terrible of them was used against Vrish. The narration says:

“Gurkha, flying on his fast and powerful vimaana, threw a single projectile charged with all the power of the Universe at the three cities of Vrishi and Andhak. A red-hot column of smoke and fire, bright as 10,000 suns, rose in all its splendor. An unknown weapon, the Iron Thunderbolt, a gigantic messenger of death who turned to ashes the entire race of the Vrishis and the Andhaks.”

It is important to note that these types of records are not isolated. They correlate with similar information from other ancient civilizations. The effects of this iron lightning contain an ominously recognizable ring. Obviously, those who were killed by her were burned so that their bodies were not recognizable.

Astra: weapon of mass destruction of the gods

Astra appears before us as a supernatural weapon used by a particular deity. The mastery or use of a weapon required the knowledge of a mantra or invocation,

Each Astra had special terms of use, and violation of the terms could be fatal. Due to the gigantic destructive power of this weapon, his knowledge was passed from teacher to student exclusively orally.

Astra will play a very important role in both the Ramayana and the Mahabharata, where they are used in great battles by archers such as Rama, Karna or Bhishma. In fact, there is a suspicion that, as in the case of the Vimanas, some Asters work on the basis of mercury, or very similar liquids, which can circulate, rotating almost at the speed of light.

Many say that 30,000 years ago the gods destroyed the asuras with nuclear weapons – but this is most likely a matter of opinion and interpretation of ancient texts in the modern sense. Also mentioned is the fearsome and destructive Brahmastra, the gift of Brahma (the Creator), the mythical equivalent of modern nuclear weapons. As mentioned in the epic sagas of India, the power of Brahmaster is capable of destroying the entire world.

This is how the Mahabharata (Vanaparvan, chapters 168-173) describes the battle in which the warrior Arjuna – the great hero – fought against the horde of Asuras:

Indra, the lord of heaven, demanded that Arjuna destroy the entire army of Asuras. These thirty million demons lived in fortresses located in the depths of the seas . Indra, the lord of the heavens, gave his own vimana to Arjuna, piloted by his clever assistant Matali.

In the fierce battle that unfolded, the Asuras caused crushing rains, but Arjuna marched against them with a divine weapon that managed to drain all the water … Arjuna fired a deadly projectile that destroyed the entire city of the proud.

Information about a number of ancient artifacts was obtained in 1929 during the interrogation of the Trotskyist Y. Blumkin, who had previously participated in the NKVD expeditions to Tibet, in connection with the sale of secret information about the weapons of the “civilization of the gods” to German and Japanese intelligence services. Y.Blyumkin’s betrayal in fact allowed the leadership of the Third Reich to use the high technologies of the “civilization of the gods”, which were later used by the Nazis to create a secret base in Antarctica, as well as to create various types of “weapons of retaliation.”

“As I already told my investigator, on a business trip to Tibet in 1925, with the order of the head of the Tibetan state, the Dalai Lama 13, I was taken to underground halls and shown some so-called artifacts – weapons of the gods, preserved on Earth from 15-20 thousand years before our These weapons are kept in separate rooms. I wrote about this in detail in my reports …

The characteristics of the weapon are approximately as follows:

1. Giant forceps – “Wajaru”. With their help, precious metals are smelted. If you melt gold at the temperature of the sun’s surface (6 thousand degrees C), then the gold flares up and turns into powder for 70 seconds. This powder was used in the construction of huge mobile stone platforms. If this powder is poured onto the platform, then its weight is lost to a minimum. The powder was also used in medicine in the treatment of incurable diseases and for the elite – mainly the leaders used it for food to prolong their lives.

2. Bell – the so-called “Shu-tzu”, with the help of which you can blind for a while a large army or an entire army. Its mode of action consists in transforming electromagnetic waves at a certain frequency, which the human ear does not perceive, but acts directly on the brain. This is a very strange weapon. With his help, the Indian prophet Arjuna won big battles, causing his enemies to panic.

I have not seen how this weapon works. I saw the units themselves in the underground halls, and a member of the Council of Tibet gave me explanations about the technical characteristics that I passed on to the Germans, or rather to the representative of German military intelligence, Mr. von Stilhe. I met Shtilhe in Europe on a business trip abroad.

In addition to the technical characteristics of these two units, I also gave Shtilhe information about another weapon of the gods. This weapon remained from about 8-10 thousand years BC, it was discovered in underground cities under the ice of Antarctica in the area of ​​Queen Maud Land. As far as I know, in order to get there, you need a key and a rite of passage, since this place is guarded by guards.

These devices can move both under water and in the air, and they do it at great speed. They move on special round-shaped aircraft, which are not like airplanes and airplanes known to us. I also told their technical characteristics to Shtilhe …

I also informed Shtilhe about objects that are located in all parts of the world in the mountains. With the help of these objects, in one moment it is possible to destroy all cities and industrial centers of all countries on earth, regardless of the state and social system. As far as I understood from the explanations at the Headquarters and as I pointed out about this in my articles, in all parts of the world there are spheres dug into the mountains made of extra strong metal that cannot be sawed or blown up.

Within these spheres are certain mechanisms that, when activated, generate a cloud similar to the sun. This cloud erupts into the atmosphere, it is controllable, i.e. can move along a certain trajectory. It explodes in the right place.

Now it becomes quite understandable the “secret” stamp imposed on the official research of artifacts of ancient civilizations, as well as why, at the official level, all these research and the artifacts themselves are hushed up or denied.

The targeted campaigns to falsify our real history are also becoming understandable. In addition, this information sheds light on the question of what kind of vehicles attacked the squadron of American Admiral Richard Byrd near Queen Maud Land in 1947.

In this article:astra weapons, Mahabharata