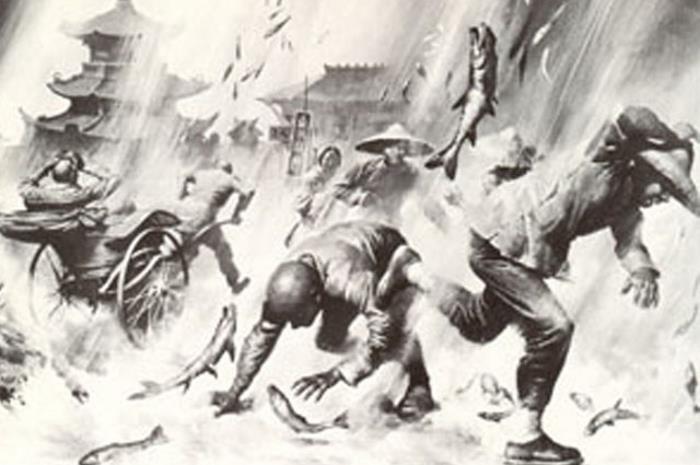 Science for a long time did not pay attention to this anomalous phenomenon, suggesting that it was nothing more than legends and fabrications. But then an explanation was found.

On June 17, 1940, the inhabitants of the village of Meshchera with amazement rushed to collect silver coins of the 16th – 17th centuries. that fell from the sky. An unusual find was then handed over to the state – in total, about a thousand coins were counted.

According to the most common version, the weather became the cause of the money rain: first, the rain washed out of the  ground the treasure buried in the time of Ivan the Terrible, and then the hurricane lifted it into the air and scattered it around the neighborhood.

In July 2001, red rain poured in the Indian state of Kerala. With interruptions, it continued until the end of September, and the population was pretty frightened: in precipitation, similar to blood, people saw an ominous sign. Later, scientists reassured them: the rain became colored due to  spores of local algae.

In 2005, frogs fell from the sky near the Serbian village of Kaja Janovik. Its inhabitants were at a loss. Experts suggested that the blame for everything is the tornado, which dragged amphibians into its funnel from a nearby body of water.

Similar “precipitation” from frogs and toads was observed at different times in other countries. For example, in 1953 in Massachusetts, USA. Or in 2007 in  El Rebolledo, Spain.

Dinner fallen from the sky

Rain from animals is undoubtedly a rare occurrence, but not just mentioned in written sources. Such evidence is found among the ancient Greeks and Romans. The message about squirrels falling from the sky is contained in the Ipatiev Chronicle And in the XIX century, the press began to publish them.

For example, the 1877 Scientific American magazine described snake rain reaching 18 inches (about 45 centimeters) in length that fell in Memphis. In June 1880, quail rained over Spanish Valencia, and in February 1861, Singaporeans saw thousands of fish fall from the sky along with a shower.

There have been reports of unusual precipitation from animals both in the last century and in the present.

In 2007, residents of the Argentinean province of Salta watched spiders pouring from the sky, in 2011, earthworms began to fall on the students of one of the schools in Scotland (they had a physical education lesson in the stadium).

The teacher was forced to interrupt the lesson and take the children away, and then he went out with them and collected these worms for a long time to give them for examination. Scientists suggested that the wind brought them, but the weather that day was sunny and calm.

For the city of Yoro, in Honduras, fish rain (in Spanish – aguacero de pescado) has become so commonplace that the local department holds the annual Fish Rain Festival, which attracts tourists.

The action takes place in the time interval from May to July: a dark cloud appears in the sky, which is opened by a heavy rain, and after it hundreds of living fish remain on the ground.

Both locals and visitors collect the prey and bring it to the kitchen, where they prepare a gala dinner. Fish rain is even mentioned in Honduran folklore.

Can a frog spawn in the cloud?

Science for a long time did not pay attention to this anomalous phenomenon, suggesting that it was nothing more than a legend.

Therefore, a version emerged that now looks like sheer absurdity. Namely: the creatures that fell from the sky themselves somehow originated in the clouds. In the 19th century, a near-scientific base was even brought up under this hypothesis: they say, along with water vapor, eggs of frogs rise into the atmosphere, where they grow and  live in clouds for some  time, and then fall to the ground with rain.

Nevertheless, the French physicist Andre Marie Ampère (the one whose name is used to name the unit of current strength) tried to explain the rains from frogs and toads with more rational arguments. Subsequently, they were accepted and developed by other scientists.

Ampere suggested that strong winds are able to pick up large groups of toads, crawling out of the reservoirs on the grass, and carry them over distances of several kilometers. Actually, the scientific explanation of the phenomenon, which caused bewilderment and superstitious awe among our ancestors, boils down to abnormal weather phenomena – hurricanes and tornadoes.

Scientists have proven that they can raise fish and the same frogs from the surface of reservoirs, small animals from the ground, and intercept birds in flight. Unable to escape from the funnel of a tornado, animals soar higher and higher until the elements subside and its energy yields to Earth’s gravity.

There is another scientific explanation which denies the very existence of rains from animals. It is noticed that some species of fish are able to crawl along the grass, moving from one reservoir to another, like eels.

If a person sees them immediately after the rain, he might think that they have fallen from a thundercloud. The same goes for frogs and toads. Even the ancient Greek philosopher Theofast suggested that amphibians do not fall from the sky with rain – this rain makes them crawl out of ponds and swamps into open areas.

In this article:anomalous phenomena, strange rain