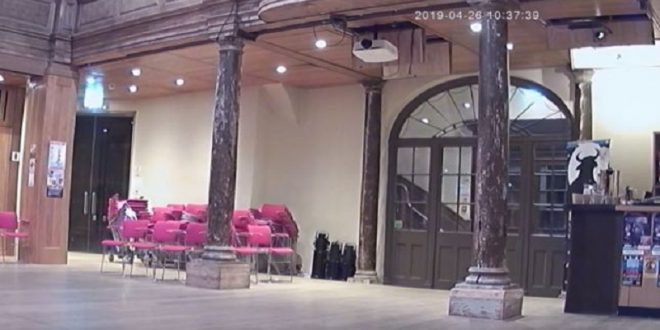 Captured by ‘Ghosthunters’ in Great Yarmouth, footage shows bizarre shadows moving behind a pair of doors in the closed theatre. The video was uploaded to the Ghosted UK YouTube channel where commentators debated the authenticity.

While some suggested it may be a case of shadows from the street outside, the uploaders explained that the big wooden door beyond the glass door prevented that from being the case.

Tim Johnson, 51, a member of the group told the Eastern Daily Press that he couldn’t be sure exactly what the shadows were, but that they definitely represented ‘unexplained paranormal activity’.

‘I haven’t got a clue what they are but it definitely isn’t the shadow of people because you would have seen somebody walk in front of the window,’ he said.

‘It is really exciting and we want to go back again to explore the building further. At the minute it remains unexplained.’

The group used night-vision cameras and motion-sensing equipment to capture the moving shadows.

Members of the public, which joined the Ghosted UK team to review the footage said they had hears ‘creepy voices’ at the theatre.

In this article:bizarre shadows, Ghosthunters