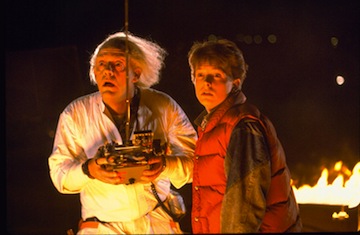 Last Friday I came home from work & found, much to my delight, that Back to the Future was about to start on cable. So obviouslythat meant I was going to fix myself a drink & watch it.

The soundtrack alone can put me in a good mood, you know —yes: I like Huey Lewis, so sue me.

The 1st time I joined Marty & the good doctor on their paradoxical voyages I was only 12 years old; the perfect age to be thunderstruck by this Sci-Fi awesomeness, the same way Hill Valley’s clock tower was hit by the fateful lightning bolt. And yet for me BttF does not merely represent a journey down Nostalgia alley, because these were the kind of movies which helped me start to think about the Big Questions during my teenage years —plus there was also the issue that the geek punches the bully & gets the girl at the end…

But truth be told, after thinking about it I’ve come to the conclusion that BttF may be one of the reasons why I never put much stock in the traditional concept of Reincarnation.

Along the years I’ve read the stories occasionally mentioned in esoteric outlets, with regards of people who claim to recollect the so-called ‘past lives’, either through oneiric manifestations (dreams) or with the help of hypnotic regressions. I admit I have marveled with the accounts of young children in India or Tibet, who seem to display an uncanny familiarity with some recently deceased’s personal experiences, to the point of convincing relatives and spouses that somehow the ‘soul’ of their dearly departed has found a new earthly vessel.

And yet… I can’t stop thinking that all this purported evidence still relies on a rather antiquated way of thinking about Time. As Forteans, have we the right to keep using spiritual models that don’t take into consideration what Einstein & others have taught us about the fabric of Reality? Wouldn’t that be akin to stubbornly keep using slang terms like ‘heavy’ in 2012, which might probably elicit a lot of frowning stares among the members of Generation Z?

Back in the days when the Teosophists were re-vamping ancient Eastern traditions for the industrializing West, we were still working on the assumption that what’s known as the arrow of Time was mandated to flow in one direction. Today physicists still tell us that the uni-directional arrow is the only way to keep a balance with Entropy & the laws of Thermodynamics —the reason why you can’t throw the pieces of a broken light bulb on the floor and watch them re-assemble into an unbroken state.

And yet that hasn’t stopped ingenious Cosmologists, Relativists & String Theorists from trying to find some ways around this problem. Nowadays talking about the possibility of building a viable time machine —one that can let you travel to the past, not just fast to the future like a spacecraft reaching a percentage of the speed of light— doesn’t get you a holiday on a padded room; respectable Science popularizers like Michio Kaku are always delighted to approach the subject, and remind us that theoretically building a chrono-craft is feasible, though incredibly difficult –for starters, you would need a $#!tload of energy, much more than the puny 1.21 gigawatts Dr. Brown managed to harness from a lightning strike.

Then there’s the paradoxes. After all, BttF delves with solving one version of the most popular time paradox: the one where either you kill your grandfather, your dad or somehow prevent your parents from getting married, hence negating your own existence.

Speaking of popularity, the most en-vogue manner of getting around the paradoxes nowadays is invoking an even weirder theory than Relativity: the Multiverse, also known as M-theory —as in  Mindf#$%ing weird!

By far the most WTF possibility of this theory is the Many-Worlds Interpretation (MWI) originally proposed by Hugh Everett in the 1950s, which posits that every time you make a decision —yes I know the theory invokes ‘observations’ but I ask thee: don’t you need to decide in order to observe?— the Universe branches out and 2 new Universes get created: one in which you decided to click on the Continue Reading button to check out this blogpost, and another in which you said ‘Meh’ and kept playing Minecraft. So in theory there’s an infinitude —it is SO a word!— of Universes where you and I were not even born, or we already died —in which case I pity the fools living in that boring Universe, ’cause they don’t know what they’re missin’…

Even the sequel to BttF included this idea in its plot, resulting in a Dystopia —or rather, a Boobtopia— in which Biff manages to make Marty’s mom his trophy wife.

Nevertheless my all-time favorite ‘What if’ possibility when it comes to chrono-nautical conundrums, has to do with the mystical idea —now backed by a few brave spirits in Academia— that the flow of Time is an illusion created by our consciousness. In other words, that our minds work as wetware Zoetropes in which the static scenes of the eternal Present gives raise to the illusion of the Past & the Future.

Assuming this is the case, how can this be reconciled with the belief in Reincarnation?

IMO one way to do so is to discard the demodé notion of ‘past lives’ altogether. For surely if what we think of as the Past exists simultaneous of the Present & the Future, then so too our ‘other’ lives are simultaneous.

To help us wrap our minds around these counterintuitive concepts Cinema comes again to the rescue, with films like Aronofsky’s masterpiece: The Fountain.

Another film which seems also to explore the idea of Consciousness traversing through simultaneous times is the recently released Cloud Atlas, which I’m waiting with elation to open here in Mexico.

But as always, the moment we come up with a suitable answer, we end up with more questions. Because if the Future already exists, does that mean it’s fixed and hence there’s no free will? Even BttF ended up with a pretty deterministic premise, despite what Steampunk Emmett Brown said at the end of the saga: Marty was meant to go back in Time & encourage the Doc to build the time-traveling DeLorean, influencing the outcome of both their lives.

And yet that doesn’t worry me that much. What does worry me is this: if the MWI is also true, and there’s a ginormous amount of Red Pill Junkies existing aside yours truly, who gets to be accountable for all our sins? Who gets to pick the karmic tab in the end?

In this article:Consciousness, multiverse, reincarnation