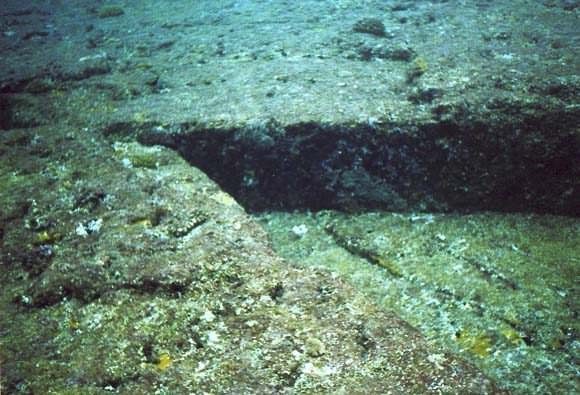 To the south of Japan there is an Okinawa archipelago known to many – it is a small island that “stretches” to the island of Taiwan. The last island of the archipelago is located approximately 100 kilometers from Taiwan, and it is called Yonaguri.

Underwater tourism is widespread here, and for several decades there is a reason why diving enthusiasts plunge into the depths of the waters more and more willingly.

Mysterious find and many years of controversy 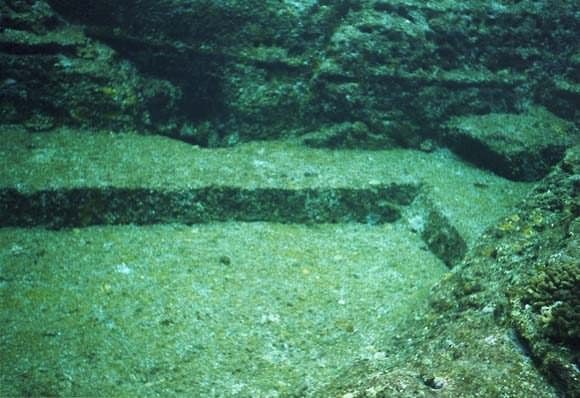 It all started back in 1985, when Kihachiro Aratake, a diving instructor, discovered a very strange object under water. It was a huge monument, which began off the coast and extended somewhere into the distance. Then Aratake was struck by ideal, as it seemed to him, lines: flat platforms, rhombuses, rectangles and terraces, which turned into large steps leading down.

The monument ended with a wall that went down 27 meters – to the bottom. This precipice was the wall of the trench, which stretched along the entire structure.

On the one hand, the monument could be attributed to the “joke of nature” that endowed it with so even lines and forms, on the other hand, Aratake had doubts. Suddenly the object was man-made? 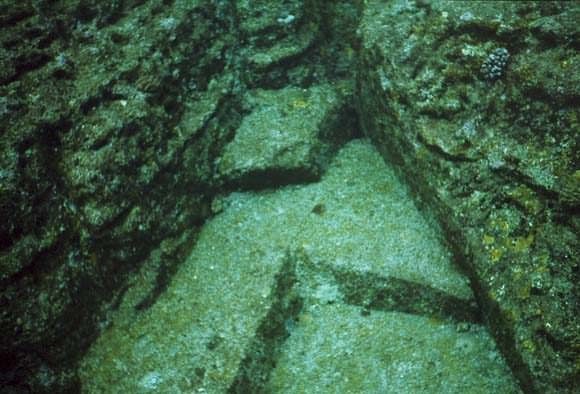 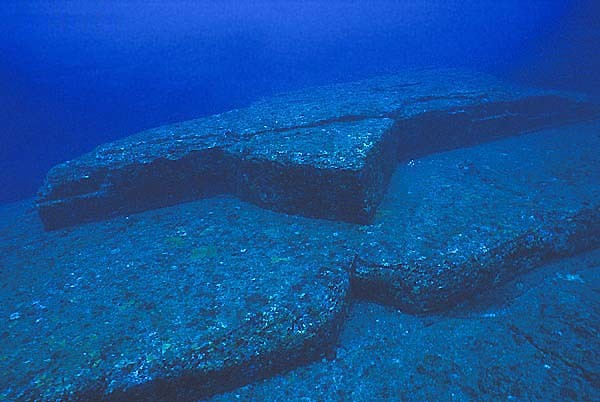 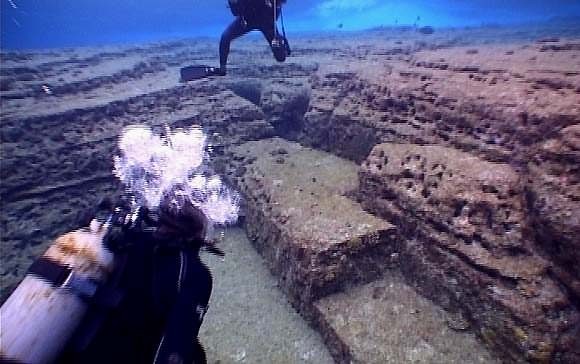 The find was made public, and a long journey began from sensational headlines to the skeptical conclusion of scientists that there was never a civilization in the designated place, whose representatives could create such a monument

But, as usually happens, supporters of the theory of the man-made origin of the object were found, including the famous professor Masaaki Kimura. He studied the surroundings of Yonagumi for about 10 years, and did not hold the opinion of the artificial creation of the monument.

Then, Graham Hancock, who adhered to the theory of the existence of a highly developed civilization in antiquity, found out about the find. Together with Boston University professor Robert Shoch, Hancock sets off to explore the monument … And the opinions of his colleagues are divided. 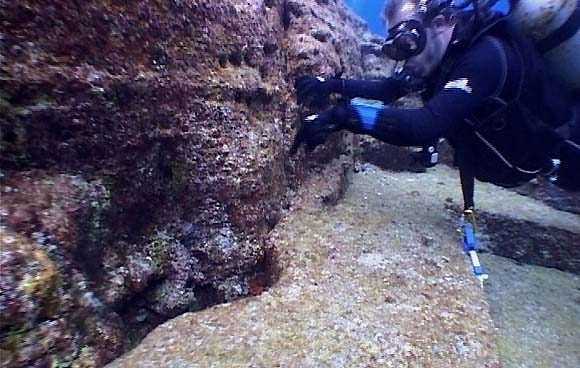 Some parts of the monument do not look like “natural” objects 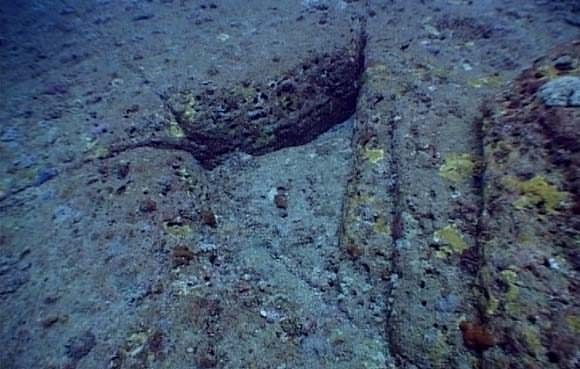 In favor of the natural origin of the monument is the fact that it consists of sedimentary rocks and sandstone – nothing unusual. And the forms that some scientists were so interested in could arise under the influence of water, wind and rain. Perfectly straight cracks could also appear solely due to the structure of the deposits.

Schoch adhered to the theory of the natural origin of the monument, and only later, when he and Hancock once again flew to Okinawa and met with Kimura, the position of the professor at Boston University “staggered.”

Arguments for the Artificial Origin of the Monument 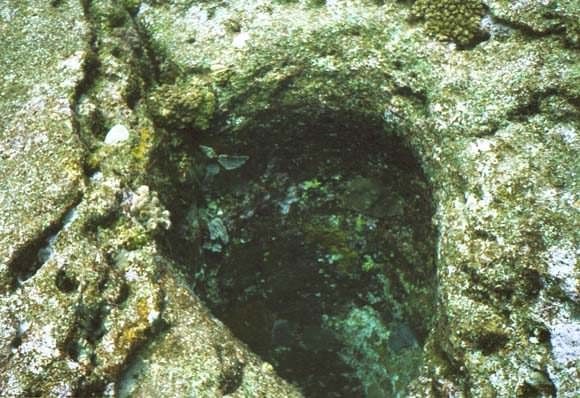 Researchers also have a lot of questions about the origin of the well. 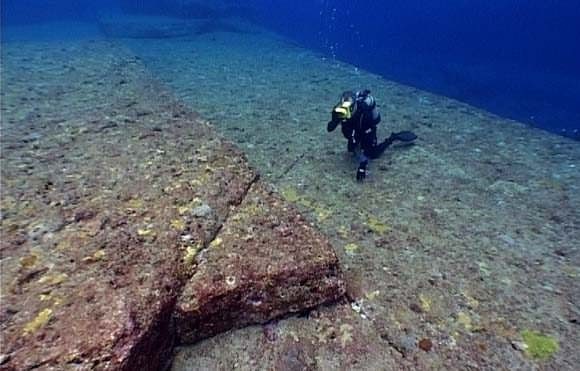 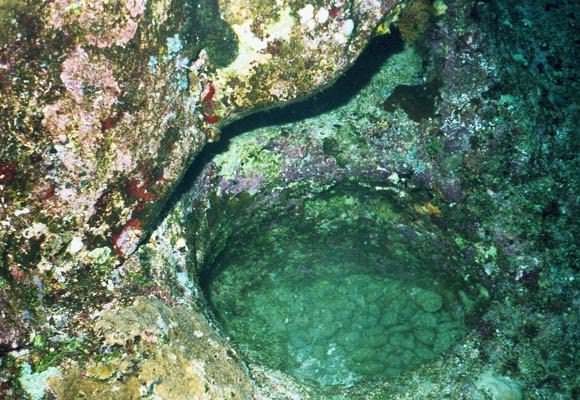 Kimura gives several arguments that may indicate the artificial origin of the monument. First of all, he notes that if the monument was formed in a natural way, then the blocks that were separated from the rock would not lie so “correctly”. They would fall differently, and gravity would play a huge role in this.

The theory of creating a structure through erosion does not stand up to criticism at all: in this case, there would be a lot of debris near the monument at the bottom, and there aren’t so many of them. 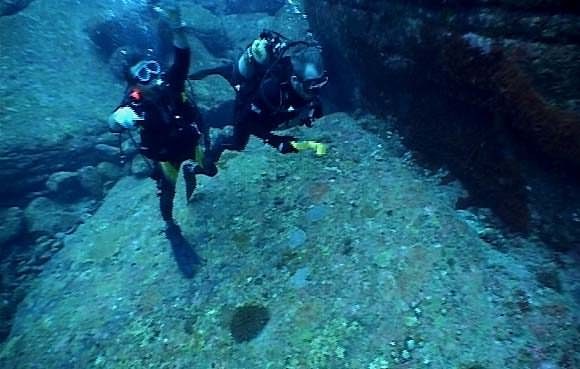 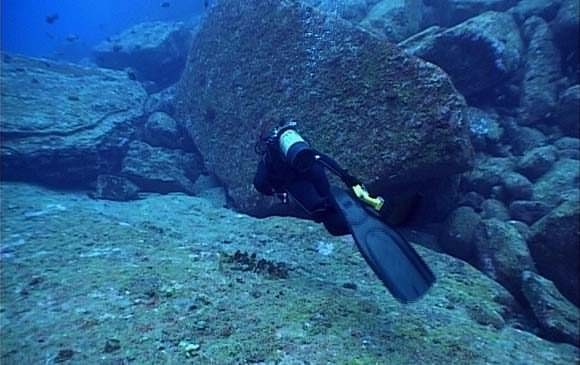 It is also interesting that side by side there are very different shapes within the monument: a narrow trench, and faces with sharp edges, and round holes, and steps. If it were erosion, then all the elements were “polished” the same way.

It is also impossible to explain deep symmetrical trenches by natural processes, as well as steps that rise at regular intervals – from a depth of 27 meters to the top of the monument.

It is not easy to explain by natural processes the presence of a wall that closes the monument from the west. The fact is that it is laid out from limestone blocks, and they are atypical for the Yonagumi zone.

The mysteries of the Yonaguni complex 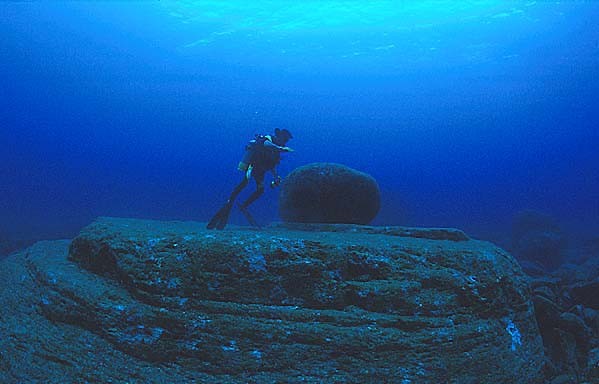 This find was nicknamed the “stone of the sun.” 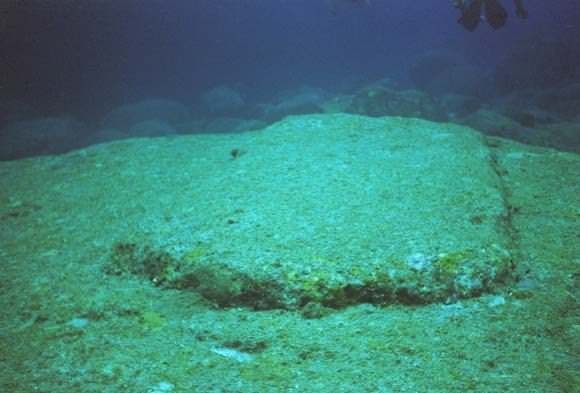 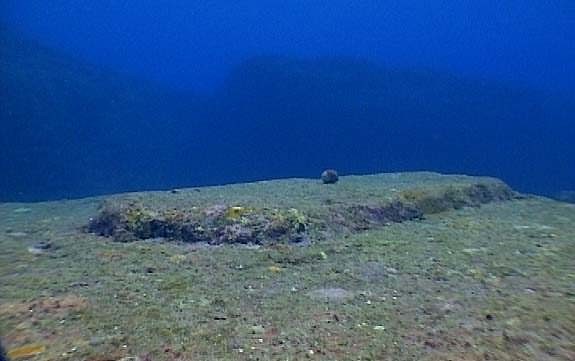 There are several more unsolvable puzzles that researchers still puzzle over. For example, the “twin pillars”, which are located at the western edge of the monument. In some ways, they are like the famous pillars from Stonehenge, and have a strict geometric shape. They, by the way, are from limestone, which, as mentioned above, is not common in Yonagumi.

It is interesting, but the position of these two pillars seems senseless to many: most likely, they fell from the top of the monument.

After several years of research, Schoch and Kimura were able to reach a compromise: they both abandoned radical points of view, and began to look for new evidence in favor of a particular theory. However, a major study of the monument took place only in 1998, under the guidance of the famous archaeologist Arbuthnot – Shocha was also invited to study. 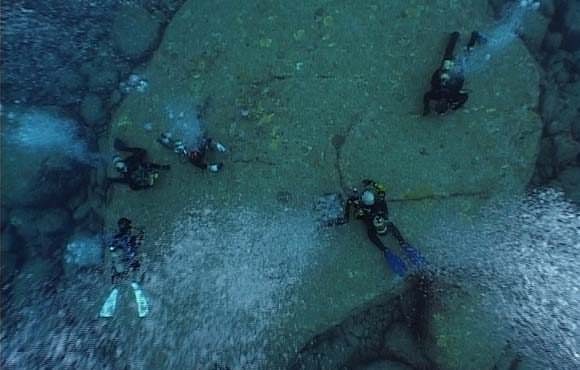 Now the “stone of the sun” fell down 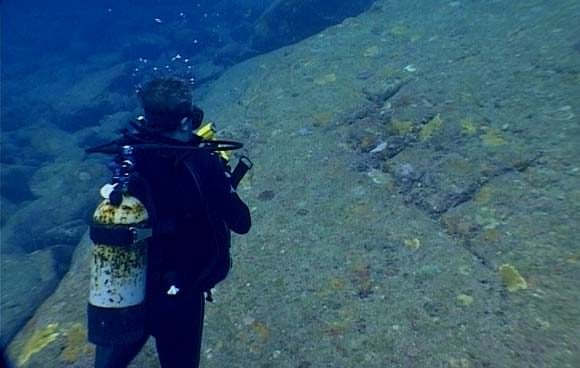 After several weeks of hard work, the skeptical Arbutnot rejected the “extreme” point of view, and began to believe that the monument was nevertheless processed with human hands.

And in 2001, after Kimura’s report, most Japanese scientists nevertheless agreed with the view that the monument is not only of natural origin. But the debate still continues, although so many skeptics who are confident in the exclusively “natural” origin of the monument have never seen it with their own eyes. 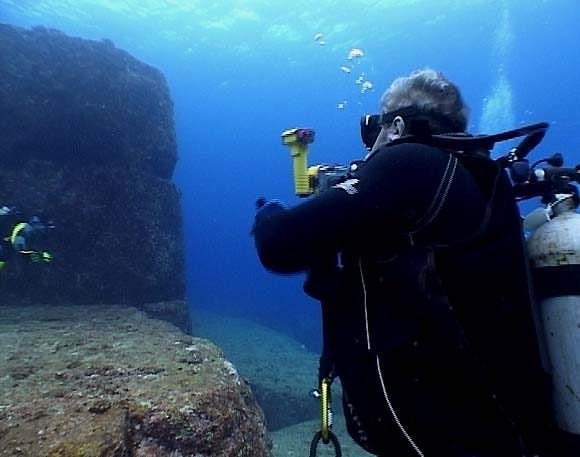 The head with “eyes” and “mouth” raises many questions 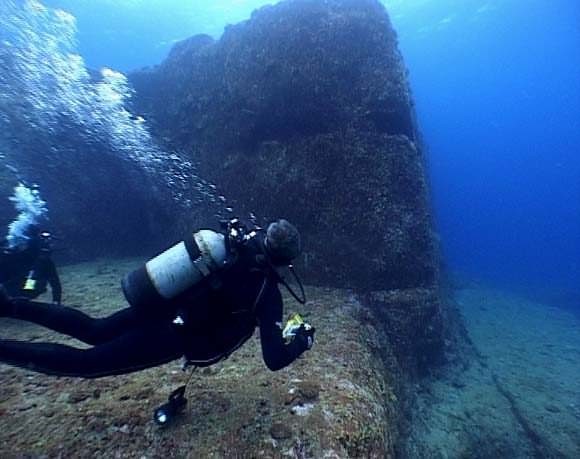 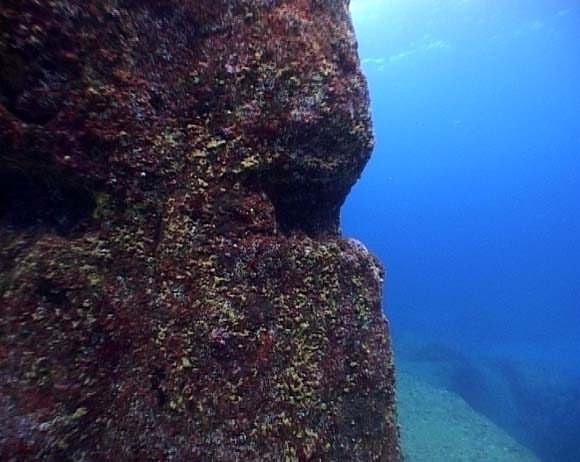 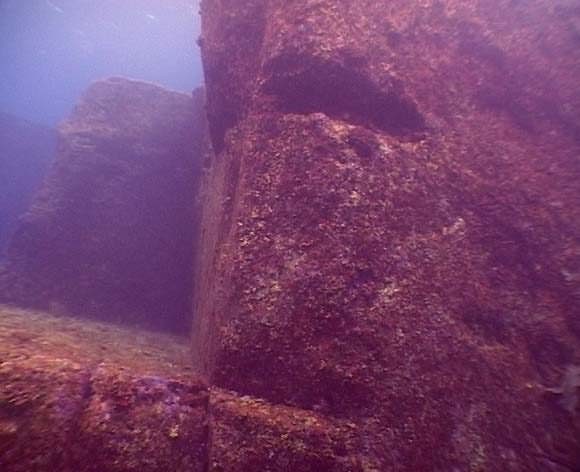 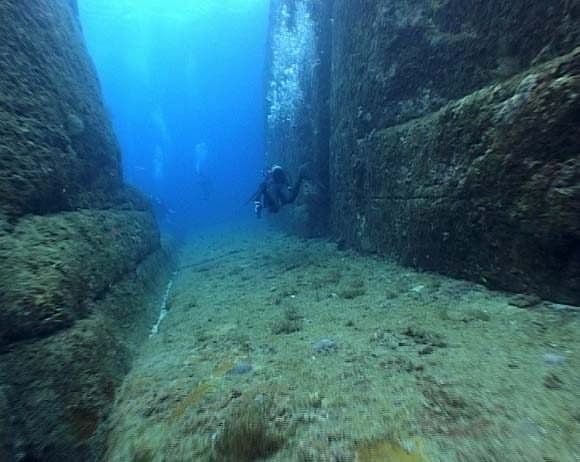 And here is another find that was discovered near the monument: an object that is very similar to a human head! This 7-meter figure could well be of natural origin, but there are recesses on it that act as eyes and mouth.

Perhaps the origin of the head is artificial, but, according to some researchers, it could be “modified”. On the side of the figure there is something that is vaguely reminiscent of a headdress of feathers – the bas-relief is not very well preserved, because many people doubt that it was created by nature.

There are more and more questions every year – as well as finds near the Yonaguni complex. Here stones with reliefs were found: dashes, crosses and even animals, tools. It is believed that representatives of ancient civilization had a hand in creating the monument and other mysterious exhibits. True, this happened on land, and as a result of tectonic processes, everything was submerged under water.

In this article:Lemuria, Yonaguni complex