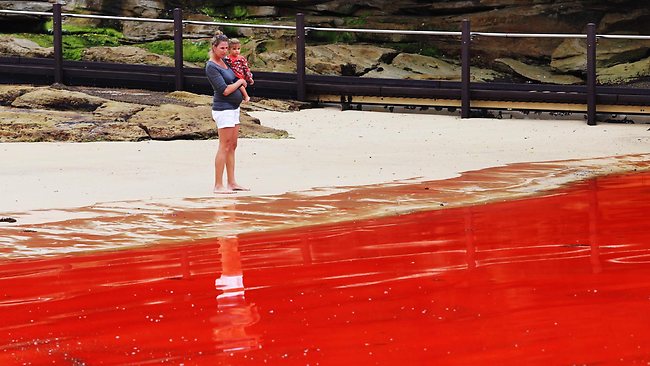 Exodus 7:17 This is what the LORD says: By this you will know that I am the LORD: With the staff that is in my hand I will strike the water of the Nile, and it will be changed into blood.  SEVERAL popular Sydney beaches, including the iconic Bondi, resembled scenes out of a apocalyptic film today after an algae bloom turned the water blood red.

Bondi and Clovelly beaches close as red algae moves in

SEVERAL popular Sydney beaches, including the iconic Bondi, resembled scenes out of a apocalyptic film today after an algae bloom turned the water blood red.

Patches of the red algae, a natural phenomenon that can be exacerbated by certain weather conditions, were sighted between Bondi Beach and Maroubra Beach this morning.

Both Bondi Beach and Clovelly Beach were closed while authorities conduct tests in the water.

Gordon’s Bay was also closed due to the algal bloom, with Beachwatch posting a photograph on Twitter showing water the colour of tomato juice.

Waverley head lifeguard Bruce Hopkins said the bloom was spotted drifting off the north side of Bondi Beach at around 6.30am.

“It has got quite a fishy smell to it,” Mr Hopkins told AAP.

“It can irritate some people’s skin but generally not much more than that.”

Mr Hopkins said the bloom has a “reddy-purple” tinge and sits on the surface like oil sheen. The bloom was dissipating off Bondi, with hopes the beach might be reopened by this afternoon, he said. Red algae was uncommon but not unheard of at Bondi, Mr Hopkins added. A seagull searches for a meal in the algal bloom which has killed many fish on the coast of Sydney.

At just before 12.30pm Beachwatch NSW announced that Clovelly Beach had also been closed because of the bloom.

The closures will come as a blow to tourists and other beachgoers if they continue throughout a week which is forecast to have soaring temperatures peaking at more than 40C on Saturday.

A Randwick Council spokesman said red algae can potentially be dangerous to humans exposed to it.

“There are some possible risks to human health from red algae including skin rashes and eye irritation, and for this reason the beach will remain closed until the algae dissipates,” the spokesman said.

“Signage has been installed at Clovelly Beach, and council lifeguards are advising people not to swim.” A spokesman for the NSW Office of Water said testing was being done to discover what caused the bloom.

One cause, he said was an upwelling of colder nutrient-rich water.

He said algal blooms, sometime referred to as “red tides”, are more common around spring and autumn when there are higher water temperatures and greater movements in ocean currents.

The NSW Office of Water expects the test results some time on this afternoon but could not confirm the beaches would be opened by the end of the day.

It comes after toxic algal bloom was detected in Botany Bay, south of Bondi on Friday.

The NSW Office of Water spokesman said the two blooms were “probably not related”, but were unable to confirm further details until test results on the algae at Bondi became available.

While many locals have been deterred by the phenomenon, many people – believed to be tourists – are still swimming in the water.

Bondi local Michael Strum said the algae had stopped him swimming in the water.

“It looks like pink sludge, it’s disgusting,” he said.

“You can even see it on the sand.”

Irene Eristian, 33, said the colour of the water was “quite intense”.

Some, like 18-year-old Bondi woman Josie Capel, said she was curious to find out what the effects are and “what the risks are, if there are any”.

Late this afternoon Bondi beach was reopened after the algae bloom broke up sufficiently to allow swimmers to safely return to the water.

A spokeswoman for Waverley Council said most of the algae had either washed up, or broken up in the water.

It is believed the red algae will continue to break up overnight, with Waverley Council not expecting to need to close beaches again tomorrow.

It is the last thing the residents of Chongqing would have expected to see. But the Yangtze river, which runs through the city in south-western China, turned a bright shade of orange-red yesterday.

The waterway where the Yangtze met the Jialin River provided a fascinating contrast as the red started to filter into the other river. Meeting point: A ship sails across the junction of the polluted Yangtze River (left) and the Jialin River in Chongqing, China, yesterday Shock: The Yangtze river, which runs through the city in south-western China, turned a bright shade of orange-red yesterday
Dirty/clean: A ship sails across the junction of the Yangtze River and the Jialin River at the exact spot where the dyed river starts to bleed into the Jialin

In the thick of it: A fisherman goes about his daily business

While officials investigate the cause of the colouring, one fisherman went about his daily business as if nothing had happened.

Others were so amazed that they collected samples in water bottles.

Although the cause is yet to be determined, this is not the first time a river has turned red in China. Last December, the Jian River in the city of Luoyang, in the north Henan province, turned red after becoming polluted by a powerful dye.

The dye was being dumped into the city’s storm drain network by two illegal dye workshops.

Officials raided the factories to shut them down, and then disassembled their machinery.

According to chapter 16, verse 4 of the Bible’s book of Revelations, one of the signs that Armageddon is near will be an angel pouring a bowl into the rivers, turning them into blood. According to the Inquisitr reports

Natural bodies of water like lakes and rivers turning blood red sounds like something apocalyptic straight out of the Bible, but a lake in southern France displaying this phenomenon has a perfectly natural explanation for it: salt.

A lake in the Camargue in southern France, a river delta right where the Rhône meets the sea, turned blood red, causing some panic. But fear not: scientists are saying that the color is due to a natural phenomenon, and not a chilling portent of doom, reports NY Daily. A high concentration of salt taking the form of salt flats caused the water to run an eerie blood red color, says scientists.

The salt build-up can be seen on plants, rock formations, and beaches in photographs snapped by Russian photographer Sam Dobson. The strange and eerie photos, seen here, were described by the photographer thusly:

“Every small branch is covered with crystals. with the red water as a background it looks like something extra-terrestrial,” said Dobson of the strange phenomenon. “I was just overwhelmed with emotions the whole time I was there. Despite my numerous travels, I have never seen anything like this before.”

This isn’t the only time such a thing has happened, either. Lake Retba in Senegal recently took on a strawberry milkshake-like hue for similar reasons, reports the Daily Mail.

“The strawberry [color] is produced by salt-loving organism Dunaliella salina. They produce a red pigment that absorbs and uses the energy of sunlight to create more energy, turning the water pink,” Michael Danson, a bacteria expert from Bath University said. “Lakes like Retba and the Dead Sea, which have high salt concentrations, were once thought to be incompatible with life – hence the names. But they are very much alive.”

So even though fish and birds are dying by the thousands, and bodies of water are turning blood red, these are not signs of the end-times. You can rest easy: it’s all natural. 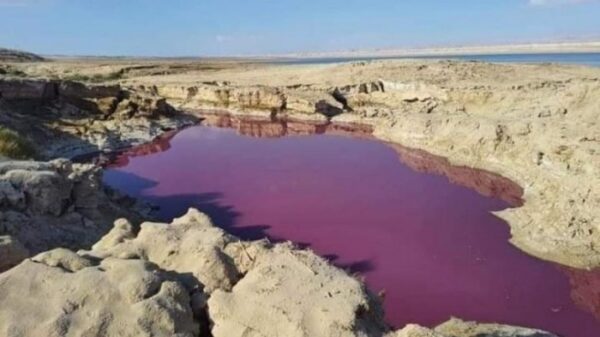 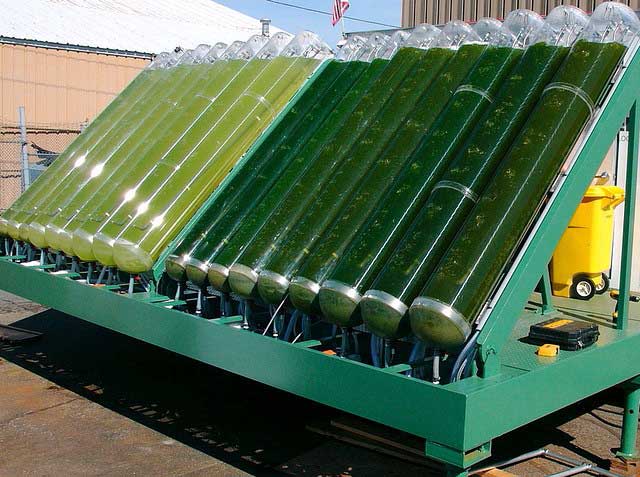 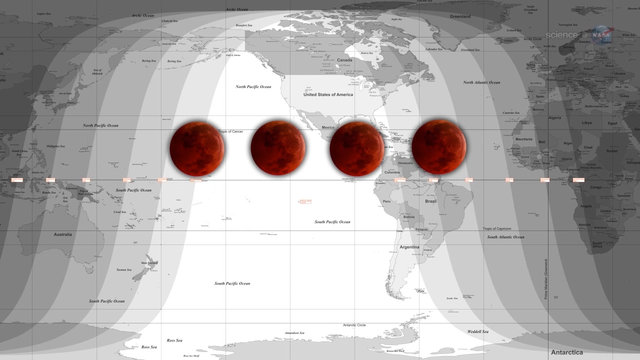 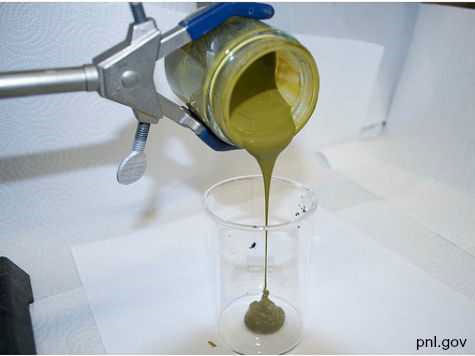 A new scientific discovery that takes algae and turns it into crude oil in minutes rather than millions of years could be the end...

Peter Plogojowitz (died 1725) was a Serbian peasant who was believed to have become a vampire after his death and to have killed nine... 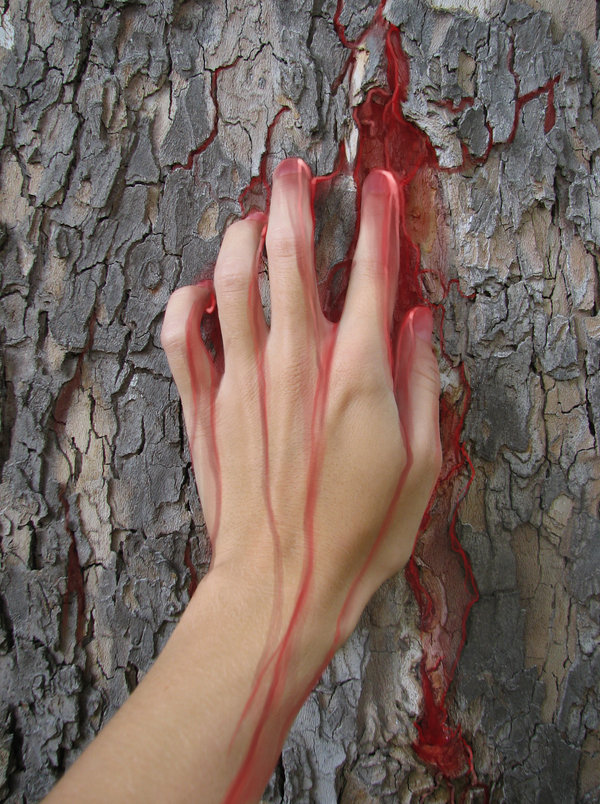 Bleeding Trees: An Apocalyptic Sign? The Apocalypse Of Ezra Predicted It

According to the Apocalypse of Ezra, one of the signs of the approaching ‘Apocalypse’ will be trees bleeding; does this video show just that...