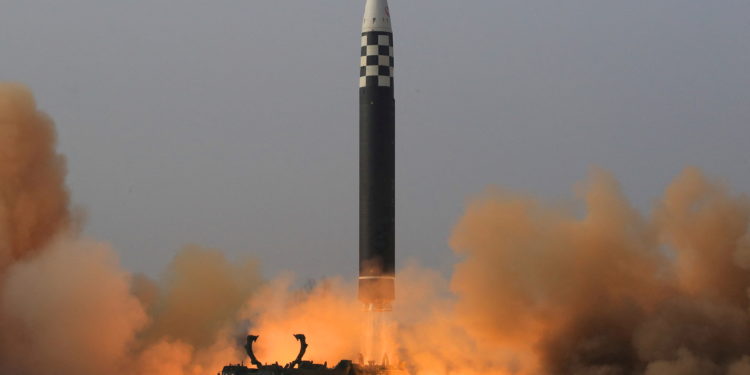 When the attention of the whole world is riveted on Ukraine, which has been resisting the invasion of Russian forces for more than six months, it seems to many that this conflict will form the basis of the last war. However, the main conflict could break out not in Ukraine or even in the Middle East, but somewhere in the North Korean region.

On the night of October 4, 2022, North Korea launched a new ballistic missile of an unknown type, South Korea’s National Defense General Staff announced. The missile flew over Japan for the first time in five years.

The missile launch, which is part of an increase in Pyongyang’s missile tests this year, was in an “easterly” direction, the staff added.

The Japanese government believes it was an intercontinental ballistic missile (ICBM).

Judging by the firing distance, we are talking about testing a medium-range missile, which the Koreans were forbidden to launch, so today there will be quite a lot of noise and all sorts of loud statements around this topic.

Japanese government spokesman Hirokazu Matsuno spoke of an ICBM launch that passed over the archipelago and fell into the sea outside Japan’s exclusive economic zone.

Earlier, the government had warned citizens to “take cover” before the missile flew over the country with a proposal to immediately go down to the nearest bomb shelter.

It is North Korea’s fifth missile test in ten days, possibly in response to a show of military force by the US, South Korea and Japan, which held trinational aviation and anti-submarine drills last week.

So far, it is not very clear what prompted the Koreans to take such actions, but in this situation, many now suddenly remembered the Jewish prophecies about the End of Days, in a number of which North Korea appears.

The most famous prediction about North Korea and the role of this country in the apocalyptic scenario dates back to 1994. It belongs to the famous Israeli Kabbalist Levi Saadia Nahamani, who accurately predicted the 1967 Six Day War and the 1973 Yom Kippur War.

About North Korea, which in 1994 still had long-range missiles and nuclear weapons, Levi Saadia Nahamani said:

“Neither Syria, nor Persia (Iran), nor Babylon (Iraq), nor Gaddafi (Libya). Korea will come here!“

Another prophecy, which is actually 1500 years old, became known just a few years ago and was widely discussed at eschatological sites. It dates back to the year 4632 according to the Jewish calendar or 872 AD, when an elderly Jewish couple, already childless, who was desperate to have a child, suddenly had a boy. As soon as the child spoke, he began to pour long quotations in Aramaic, which made a shocking impression on the rabbis. They began to write it all down, and as soon as the boy transmitted the entire text, he died.

For the next one and a half thousand years, the rabbis tried to decipher what the child told them, and only in our time, the 100-year-old Rabbi Moshe Aaron Ha-Cohen, who devoted his whole life to these texts, slightly opened the veil of secrecy that shrouded them. According to him, the texts tell about the time and signs of the coming of the “Messiah“, before which chaos and horrific violence will reign throughout the world. But the end of everything will be put in a war that will be very short and last minutes, and this war will be unleashed by the country that best fits the description of North Korea.

In this article:ICBM, North Korea