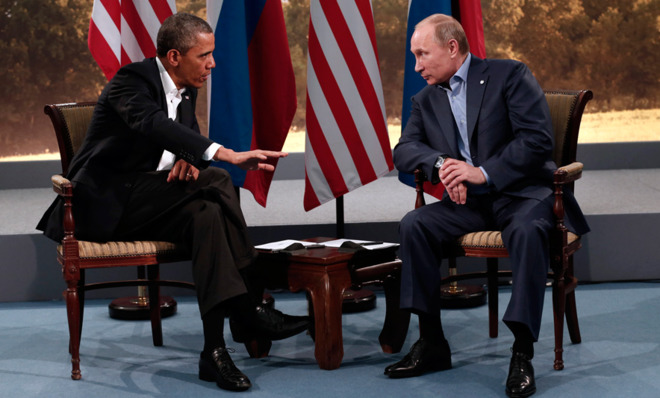 As tensions continue to ramp up in Ukraine and other parts of the world, worries about World War 3 continue. One expert said this week that the U.S. is likely to lose to both Russia and China if a nuclear battle ensues. Although a ceasefire has been called in Ukraine, pro-Russia separatists continue to attack the Donetsk airport, according to Euronews. Meanwhile the U.S. and the rest of the West continue to point the finger at Russia, accusing President Vladimir Putin of assisting the separatists in their battle to take Crimea from Ukraine.

A spokesperson for Ukraine’s National Security and Defense Council said at a press conference today that the separatists are “moving out everything they can find—coal, metal, vehicles—and taking it to the Russian Federation.” He also said that while a ceasefire has been called in Ukraine, separatists continue to break it and have attacked the Donetsk airport five times in just the last 24 hours.

Moscow continues to deny that it is backing the separatists by providing soldiers and weapons. However, the West remains convinced that Russia is assisting them.

Forbes contributor Anna Borshchevskaya points out that the problem between the West and Putin goes back a long time. The Russian president blames the West for all of his nation’s issues and seems to believe that dissent in Russia and other nations can only occur with outside help.

He blamed the west for the Orange Revolution, which happened in Ukraine in 2004 and came about as a result of government corruption. Putin reportedly thinks that the revolution and similar unrest began because of interference by the U.S. Since then, he has been seeking to keep other uprisings from happening.

Russia’s blaming of the West dates even back to tsarist times, and the feeling has been mutual, at least with the U.S. When the Cold War hit, many were concerned that the world was on the brink of World War 3 then. Although most consider that the Cold War ended in the early 90s, it appears as if it continues today, as tensions between the U.S. and Russia continue, even in spite of the two nations’ collaboration on space exploration.

The U.S. has also been on frosty terms with China for some time. Beijing has been accused of spying on the U.S., and now China accuses the U.S. of distorting facts about the protests in Hong Kong. The International Business Times reports that China has accused the U.S. Congress of a “deliberate attack” against its policies.

The comments came after an annual report from the U.S. Congressional-Executive Commission on China. The report blasted Beijing or its authoritarian government model which quells freedom of speech. The report also urged U.S. lawmakers to support the democracy protests in Hong Kong.

Chinese officials are now telling the U.S. to back off and stop interfering by pushing Hong Kong toward democracy in its talks with China.

Meanwhile a self-proclaimed “expert” suggests that if World War 3 should occur, it may include the U.S., Russia and China. While many assume that a third world war would result in total annihilation, a retired American university professor said that the U.S. will lose such a war.

The Inquisitr reported earlier this week that James Henry Fetzer made the remarks on Press TV, an English-language Iranian TV network. Fetzer is a professor emeritus at the University of Minnesota and a member of the editorial board of Veterans Today.

He frequently appears on the Iranian program, although in the U.S., most consider him to be a conspiracy theorist. He’s known for saying that the U.S. government staged the 9/11 attacks and that the massacre at Sandy Hook Elementary School was the result of a collaboration between the U.S. government and Israeli death squads.

Fetzer is now accusing the U.S. of “attempting to encircle Russia with a series of anti-missile batteries ostensibly directed toward Iran because of its nuclear weapons program when Americans and Russians and most of the world know that Iran has no nuclear weapons program.” He also claims that the U.S. airstrikes in Syria are not aimed at ISIS but instead are meant to destroy the country’s infrastructure.

The professor also said that because of U.S. intervention in Syria, Russia and China, it has given nuclear superpowers the right to flex their military muscles. He suggested that Washington “back down” or possibly risk sparking World War 3.

In this article:Russia v US, ww3, WWIII