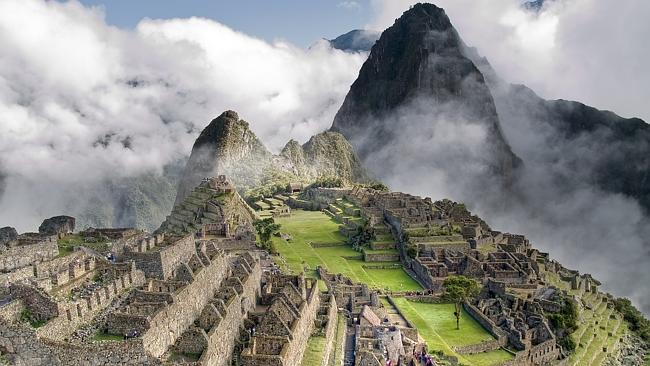 FROM ghostly apparitions of a French girl in a white dress to scuba diving the ruins of the world’s largest ship graveyard, travellers have long been drawn to creepy destinations.

Famous for ghost sightings, past horrors or unexplained mysteries, tourist operators report that these spooky spots are becoming increasingly popular with Australian travellers.

Travel company Adventure World, which specialises in exotic and unique locations, has revealed its list of the World’s Top 10 Creepiest Destinations.

From the famous witches of Salem through to a lost Incan city where virgins were said to be sacrificed to a sun god, Fiona Hunt, Managing Director of Adventure World, says there is something spinechilling for everyone. Chuuck Lagoon is an idyllic sheltered body of water in the South Pacific but beneath the water lurks the world’s largest ship graveyard, the ‘Ghost Fleet of Chuuck Lagoon’.

The lagoon was Japan’s main base in the South Pacific during WWII but two days of sustained American bombing in 1944 sent more than 60 Japanese warships and 200 aircraft to the bottom of the sea.

About 3000 Japanese soldiers lie in this watery grave, and you can still see many ghostly remnants including a fighter pilot’s oxygen mask. The town on Salem in the USA has become synonymous with witchcraft. Source: Supplied

The famous witch trials of Salem in 1692 saw twenty women hanged, five die in prison and many more accused of witchcraft.

While the jury is still out on whether these women were guilty as charged, this famous chapter in history remains synonymous with the town today.

Some say the uneasy souls of the condemned witches still haunt Salem at night seeking revenge for their untimely end. The terracotta army figures were buried 2000 years ago. Source: Supplied

It took thousands of years for the first of the Terracotta Warriors of Xi’an in China to be unearthed.

The ghost army was buried with China’s first emperor Qin Shi Huang more than 2000 years ago to protect him in the afterlife.

Facing East in a rectangular battle array, each with unique facial expressions, the army boasts more than 8,000 soldiers, 130 chariots with 520 horses and 150 cavalry horses.

Soon after the emperor’s death, peasants revolted and destroyed the warriors, set the tomb on fire, and buried them in dirt and ash for thousands of years.

The vast ghost army lay undisturbed until farmers stumbled upon them in 1974.

Local folklore has it that the buried soldiers take their job of protecting their emporer’s tomb very seriously and are upset it continues to be disturbed by archaeological excavation.

4. the Mouth of Truth, Rome, Italy Some believe the Mouth of Truth in Rome to be the ultimate lie detector. Source: Supplied

Legends abound about the Bocca della Verita (The Mouth of Truth) in Rome.

The ancient Roman marble disc is etched with the face of the god of the sea Oceanus.

It is believed the disc, which was once used to drain the blood of cattle sacrificed to the god of Hercules, is the ultimate lie de.tector

Locals say the mouth will close on the hand of anyone who utters an untruth.

These days anyone living near the statue in Santa Maria in Cosmedin won’t dare tempt fate by putting their fingers in its mouth for fear of losing one.

And some Italian parents still warn their children off telling lies by threatening a visit to Bocca della Verita.

5. The Lady of Lourdes, Lourdes, France Lourdes, on the foothills of the Pyrenees in France, is home to arguably the world’s most famous religious apparition.

In 1858, 14-year-old peasant Bernadette Soubirous was greeted by a vision of a little girl on 18 separate occasions.

She said the girl was wearing a white dress tied with a blue ribbon, a white veil on her head and a yellow rose on each foot.

Her story was widely debated by the townspeople, yet by 1859, it had spread and thousands flocked to the town in hope of seeing it for themselves.

In 1864, a statue of the Lady of Lourdes was erected after a lengthy canonical investigation declared her vision worthy of belief. Dead miners are said to rise when the sun goes down in Humberstone, Chile. Source: Supplied

Ghost sightings are so common in this South American town that some locals refuse to even step foot in it.

The former mining town of Humberstone in northern Chile was built in 1872 on the back of a booming salt mine.

During the Great Depression the town was abandoned and the starving workers who died before getting out were laid to rest in horrific open graves in the La Noria cemetery.

The ghost miners are said to rise at night and haunt the streets with sightings so frequent that the people of nearby village Iquique refuse to go near the town. This statue is handcuffed every night to prevent nocturnal mischief. Source: Supplied

To stop her from haunting the people’s dreams at night, a statue of a Burmese deity is handcuffed every night between 9pm and 6am.

According to the Buddhist beliefs, the statue of Mya Nan Nwe is an important “naga” or protector of cherished things which is said to guard the riches used to build the golden pagodas.

One such pagoda is Botatuang in Yangon built by the area’s earliest residents, the Mon people.

Worshippers believe Mya Nan Nwe can change itself into the spirit of a beautiful young girl in order to protect the pagoda’s gold.

In 2009, Burma’s former leader, General Than Shwe, ordered the kneeling statue inside the pagoda to be covered in a green robe and handcuffed every night.

He believed the girl came to him in a dream and warned him of the dire consequences of his government’s repression of the pro-democracy movement led by Aung San Suu Kyi. Spirits are said to roam the ancient fort of Bhangarh in India. Source: Supplied

Travellers are prohibited from visiting after dark to protect them from the spirits that are said to guard the ancient Bhangarh Fort.

Located 300kms south of Delhi en route to Jaipur, the village is renowned as the most haunted place in India.

Legend has it that the Hindu deity Baba Balanath only allowed its construction on the condition it cast no shadows over him.

But when the palace was built to a height high enough to cast a shadow his forbidden retreat, Balanath furiously cursed the fort until the end of time.

Locals prohibit visitors from entering after dark or before sunrise to protect them from the spirits they say guard the ruins, including that of Baba Balanath. The Castle of Good Hope is said to be the most haunted location in Cape Town with dozens of scary stories attached to it. Source: Supplied

As the oldest city of South Africa, Cape Town has no shortage of spooky tales relating to its former inhabitants.

South Africans say The Castle of Good Hope is the most haunted location in the city.

Many workers and visitors have reported seeing ghosts roaming the grounds including a cloaked woman, a black dog and the former Governor.

Two years ago, an independent film crew spent the night in the castle and captured audio and footage of what they believed to be paranormal activity.

One of the producers even said he was slapped in the face by an invisible perpetrator.

10. The Virgins of the Sun God, Machu Pichu, Peru The popular tourist attraction Machu Picchu is said to be haunted by numerous spirits. Source: Supplied

Rumours abound that Machu Picchu is haunted with the spirits of the young virgins who some believe were sacrificed to the Incan sun god, Inti.

While not all historians agree these ritual killings actually occurred at this site, a wander through the steep terraces and stone altars high in the Andes may make you wonder.

It is also said that apparitions of Incan high priests sometimes appear high on the hilltop as the sun rises.

One thing that is certain is that the ancient Incan city is one of the world’s most eerie and atmospheric destinations on earth.

Built about 1450 perched on a mountain ridge between two sacred peaks, the city was mysteriously abandoned 120 years later and left deserted for centuries.

Hidden by dense growth and known only to a handful of local farmers, the lost city was rediscovered by an American historian in 1911.

In this article:creepy, travel destinations