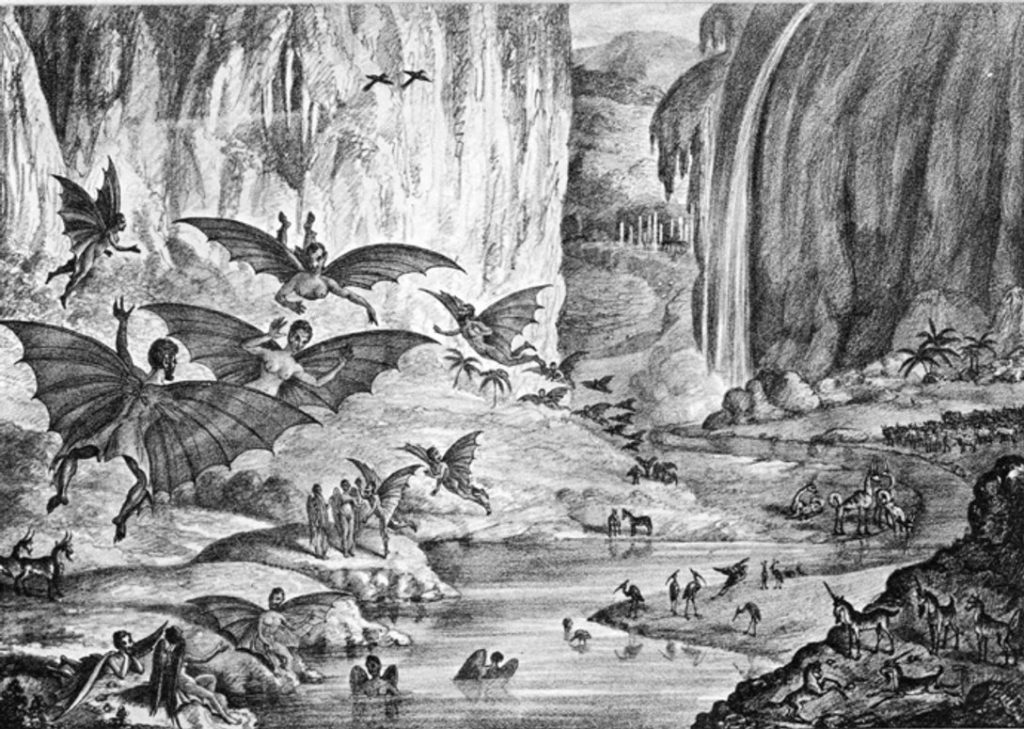 Nothing could have prepared night watchman José Padrón for the sight that confronted him on the night of August 30, 1967. An enormous shape was heading in his direction, taking prodigious strides. The monstrous being had wings which Padrón would later compare with those of a small airplane. The sound it produced was apparently made by the creature’s claws as it tried to take flight.

Padrón had been getting ready to go to sleep within the cramped interior of the tin shack serving as guardhouse for the construction area on Mexico’s Route 57. At around 1:00 A.M., he had been awakened by the sound of something large stumbling around the motor pool. Fearing vandalism, the watchman had shaken himself awake and gone to investigate.

Padrón ran back to the shack, cowering fearfully inside until daybreak, when supervising engineer Enrique Rueda arrived on the site. Rueda listened carefully to the badly shaken watchman and proceeded to measure a series of fresh footprints found near the shack. The prints measured a little over one foot wide and had a depth of six inches. The engineer’s computations showed that whatever had made the impressions on the soil had weighed more than 600 pounds. Photos of the strange prints later appeared in the El Sol de San Luis newspaper. Fortean researcher Godofredo de la Fuente subsequently made plaster casts of the footprints. He deduced that the creature had traveled in a northeast-southeast trajectory, bordering a barbed-wire fence several hundred feet from the highway.

This incident, which would have made a great X-Files episode, drew international attention to the city of San Luis Potosí in Mexico’s minerals and metallurgy belt. But unlike many sightings of “winged weirdos,” the San Luis creature graced the construction site with its presence a second time. It returned the following night with a similar creature — possibly its mate — and both entities left a considerable number of footprints. The watchman, while understandably scared, observed them carefully. He said the creatures appeared to be headed toward the San Miguelito Mountains, adding a curious detail: The ground trembled as the creatures flew off.

This renewed visit caused the supervising engineer to increase the number of watchmen. Godofredo de la Fuente would later write in his journal, “Next to the last of the twelve footprints we noticed a broken mesquite branch which appeared to have been forcefully snapped off due to the passage of the swift mystery creatures. Only something having considerable physical strength could have snapped off a solid, spiny branch of the mesquite tree. Our inspection of the area did not yield any samples of hair nor feathers.” Fortunately, the story of the gryphon-like creatures did not rest solely on the testimony of the frightened night watchman. On September 1, 1967, a number of American tourists who had parked their campers at San Luis’s famous Cactus Inn claimed to have seen strange creatures with tremendous wingspans flying overhead. The Cactus Inn was less than a quarter mile from the construction site.

Hector Urdiales, a member of Mexico’s Cosmos A.C. paranormal research foundation, decided to lead an investigation during Easter week, 1984, to a seldom-visited area located behind Monterrey’s Cerro de la Silla, an enormous, irregular-shaped hill dominating the city. Stories of a monstrous winged being prowling the area had come to Urdiales’ attention. Accompanied by a friend, the explorer stopped at a roadside general store on the road to San Roque, where he interviewed the owner, who was among the many witnesses to the creature. They followed his indications as to where to camp and mount their watch.

Nothing unusual happened during their first day and night in the area. On the following morning, while combing the banks of a stream running through a copse of savin trees, Urdiales and his companion made a chilling discovery.

The grass at the base of one of the trees by the stream was covered in the blood and entrails of an animal. Closer inspection revealed that the savin tree’s entire trunk was streaming with blood flowing from above. Hesitantly they followed the trail of blood with their eyes until they came upon a surreal sight. Twenty feet off the ground, a large boar had been split open and spitted to a tree limb. Fear washed over the re-searchers, since they realized that the tall savin lacked the strong lower limbs which would have assisted a human to deliver the grisly cargo to such a dizzying height. Their minds couldn’t conjure up any feline predator strong enough to drag a 200-pound boar up a tree. Only a carnivorous winged predator having the wingspan and talons needed to attack that kind of prey could have possibly been responsible for the carnage.

On July 20, 1994, a farm worker at Rancho El Sabino in Monterrey was heading back to his house to have lunch at around 11:00 a.m. As he walked past a nearby graveyard, the farm worker noticed something emerge from another footpath at a distance of 100 feet. As he got closer, he realized that he was looking at a half-human, half-avian creature which was indifferent to the startled human’s presence. The creature continued to walk, chicken-like, down the footpath until it reached a crossroad. The birdman then flexed its enormous wings and turned down another path. By the time the farm worker reached the intersection, the figure was half a mile ahead of him. Then he lost sight of it altogether.

Five days later, a woman who had gone to decorate one of the tombs at the graveyard came upon the same creature and notified the authorities. News of the case prompted researchers Marco A. Reynoso, Ernesto Estrada, Esteban Guzmána, and Leopoldo Zambrano to investigate the site on July 29, 1994. Reaching the graveyard around midnight, they fanned out to cover all corners of the site but were unable to stumble across the gryphon-like presence.

Later on the following day they were able to videotape an interview with the farm worker, who gave them a comprehensive description of the entity sighting: the creature had been covered in grayish feathers and was human-looking from its head down to its torso, with bird-like attributes of wings, feathers, and talons below. The farm worker added that he didn’t pursue the creature for fear that it might attack him.