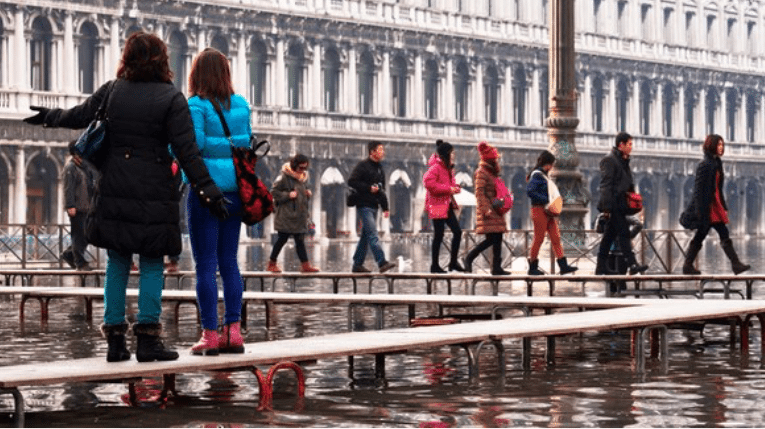 This story originally appeared on CityLab and is part of the Climate Desk collaboration.

On a gray, late-winter day, a converted chapel in the Arsenal, the city’s medieval boatyard, hummed with 21st-century activity. Engineers were looking at screens that displayed tables, maps, and charts on the conditions of the Venetian Lagoon.

This was the MOSE control center: the operational heart of a megaproject to protect Venice, one of the world’s most beautiful cities, from threatening waters. For nearly seven years, the engineers here have raised and lowered virtual doors, gathering a series of data to be conveyed into a sophisticated forecasting model.

Spread across dozens of islands and known as “the floating city” for its ubiquitous canals and bridges, Venice has grappled with inundation for centuries. But due to natural subsidence and the higher tides caused by global warming, the city is more vulnerable to flooding than ever before. So a flood barrier seemed like the obvious way to thwart future disasters.

MOSE (an acronym for Modulo Sperimentale Elettromeccanico, or “Experimental Electromechanical Module”) is one of the world’s largest and highest-profile civil-engineering works. It consists of a series of retractable floodgates stretching across the mouths of the lagoon’s three inlets. These gates can be raised on command to create a temporary wall against the sea in the event of a high tide.

Work on MOSE began in 2003, but after countless delays (caused by a corruption scandal and financial and structural issues), the barrier has yet to be completed. The hard part is done, however, and most of the engineers at the control center were confident that the system will become fully operational soon. Since the final leg of construction has been stalled for months, though, no one could say exactly when. Some said later this year; others said 2020 was closer to reality.

Whatever the date, it still remains unclear whether MOSE will adequately protect the city. And if so, for how long?

MOSE operates on the principle of tidal gates. In calm weather, the gates fill with water and sit on the seabed. But when a high tide threatens, the water is pushed out by compressed air that’s pumped in. This allows the gates to surface and prevent the tide from entering the lagoon. When the surge subsides, the gates again fill with water and sink back to the bottom.

“The idea is quite old,” said Paola Malanotte-Rizzoli, a physical oceanographer at the Massachusetts Institute of Technology who was among the panel of experts enlisted by the Italian government to come up with a solution. “We have evidence that Venetian engineers drafted mechanical contraptions to hold back the sea as long ago as in the 18th century.”

Nevertheless, a barrage of criticism has accompanied the project since its beginning. Environmental groups said that construction of the barrier would jeopardize the marine ecosystem beyond repair, while some politicians opposed the idea, stating that there were too many unknowns and that a cheaper solution was needed.

Many experts agree, however, that when the seas rise, there aren’t many alternatives to building a barrier to stop it—especially in a one-of-a-kind city like Venice.

“The concept behind MOSE is good,” said Jörg Imberger, an environmental engineer who teaches ocean sciences at the University of Miami. “But it all depends on what is meant by protection.”

According to Imberger, if everything goes as planned, MOSE will protect Venice from floods like the catastrophic one in 1966 for the next three decades or so. “But since the gates are raised only when the tide reaches 110 centimeters [roughly 43 inches], MOSE won’t avoid the flooding phenomenon that already takes place in low-lying sites like Saint Mark’s Square, which inundates when the tide gets above 80 centimeters [about 32 inches],” he said. “This could be potentially fixed by lifting the barrier at lower tides. But that would have some adverse effects on the health of the lagoon.”

The outlook gets foggier when it comes to the long run. Like much else in this world, MOSE’s effectiveness depends on how much carbon dioxide is pumped into the atmosphere over coming decades, and hence how fast sea levels rise during the barrier’s 50-year lifespan. Furthermore, conflicting statements on its engineering parameters do little to clarify.

According to a 2011 UNESCO report, three sea-level-rise scenarios for 2100 were considered during the planning phase: 16 centimeters (about 6 inches), 22 centimeters (about 9 inches), and 31.4 centimeters (approximately one foot). Planners suggested using the second one, labeled as “prudent.” But today, even the third scenario seems over-optimistic. With climate change, the Mediterranean Sea is projected to rise up to five feet before 2100, meaning that mean water level could reach the critical threshold of 110 centimeters. That would cause Venice to suffer flooding twice a day at high tide.

Malanotte-Rizzoli maintains that MOSE was engineered to handle about 2 feet of sea-level rise. The New Venice Consortium, the organization entrusted with building the barrier, says the same, but this reporter could find no evidence that this was an official project goal.

The question of capabilities is crucial, not only because sea-level rise makes higher storm surges more likely, but because it will require the barrier to activate more often—increasing wear and tear on a structure that has already experienced structural problems.

According to Georg Umgiesser, an oceanographer at the Italian National Research Council’s Institute of Marine Sciences, with 50 centimeters (about 20 inches) of sea-level rise, the barrier will be closed once a day, whereas with 70 centimeters (about 28 inches), the gates will be closed more often than they are open. “More frequent closing doesn’t only imply additional maintenance costs,” Umgiesser said, “but an ever-increasing dependence on the barrier to avert severe flooding. A failure could be devastating.”

Over the years, alternatives to a seawall have been proposed. Some offered tweaks to the system of mobile gates, while others involved different technologies. Still others were aimed only at making the flooding more bearable. So far, though, none has found wide support.

At any rate, it seems clear that Venice, like many other coastal cities around the world, won’t be saved by a barrier alone.

“Since the 1966 flood, the frequency of tides over 110 centimeters has doubled each decade,” said Giovanni Cecconi, head of the Venice Resilience Lab. “And this trend is not going to stop anytime soon, even if emissions were curbed.”

“It’s obvious that MOSE is not a magic wand,” he continued, “but rather something that will allow us to take time to figure out and implement new ways to cope with a crisis.”