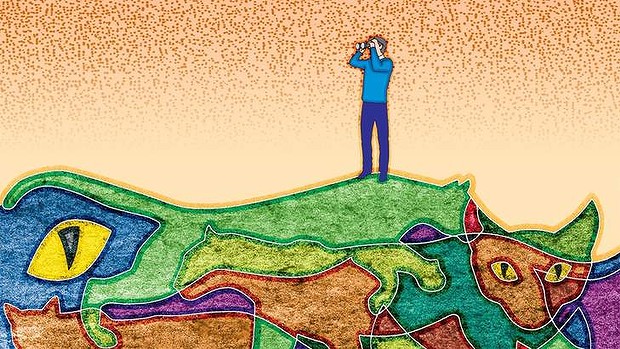 October 2013 will go down as a bittersweet watershed in the curious field of cryptozoology – the study of creatures that probably don’t exist.

Cryptozoologists are people who search for animals of folklore and rumour: yowies, bunyips, rogue panthers, ape-men, the Loch Ness monster, the Beast of Buderim, the Goatman of Maryland,  Oklahoma Octopus and many more.

In October, though, something really weird happened.

A well-respected mainstream geneticist, Dr Bryan Sykes, from Oxford University, announced that he had done DNA tests on two hair samples collected, centuries apart, by yeti hunters. The samples, he reported, both came from a species unknown to science.


For believers in the Abominable Snowman, that was the good news. The bad followed immediately: the species was not an ape, but some type of bear. The mysterious creature roaming the Himalayas was not so much Yeti as Yogi.

Sykes’ research, yet to be published in full, has done little to dampen the enthusiasm of Australia’s cryptozoological community. The hunt for our own ape-man, the Yowie, continues unabated.

Prime among the Yowie hunters is Rex Gilroy, 70, self-proclaimed ”father of Australian cryptozoology”, author, naturalist and hunter of improbable beasts.

”The silly sketches of Yowies as giant, hairy apes are all wrong,” he says. ”Yowies are a living form of [human ancestor] Homo erectus.”

Gilroy claims to have collected a  number of fossil hominid skulls – of Homo erectus and the even earlier Australopithecus – which he says proves that human ancestors were living in Australia long before the arrival of Aborigines.

Some of his best specimens were discovered near the Fish River in the central western district of NSW.

”I believe there is a population of Homo erectus still living there,” he said.

”The Yowie is no gorilla-like monster. It’s a fire-making, tool-making hominid. I’ve found campsites and stone tools, some of them only a few months old.”

Gilroy is also active in the hunt for two perennials of Australian cryptozoology – the thylacine and wild panthers.

This last is a popular target for investigation in Victoria. Reports of big cat sightings appear frequently in country newspapers, blurry video clips crop up on telly, and shots of hideously mauled dead sheep are often cited as evidence of big cat kills.

Indeed, in 2012 one of the first acts of incoming Victorian Premier Denis Napthine was to commission a review of big cat sightings. The review, conducted by the Department of Primary Industries, concluded that feral panthers, jaguars or other feline peak predators were almost certainly not roaming around the state.

However, because it is impossible to prove a negative, the report’s findings are unlikely to dampen the spirits of the cryptozoological sleuths. Prime among them is Simon Townsend, of Geelong, who heads a group called Big Cats Victoria.

”We are desperate for actual specimens,” he said, ”but that’s a difficult thing. We think the cats are Malay leopards – black leopards – and there are maybe only a couple of dozen across the state.”

Townsend is careful to separate his pursuit from the windier shores of crypto-research.

”We take this as a totally serious undertaking,” he said. ”We keep well away from the ‘goblin university’ folk. They’re not very useful when you’re after something that kills sheep and eats roos.”

Townsend enjoys a long-term collaboration with crypto-sceptic historian Dr David Waldron, based at Federation University in Ballarat. In 2012 the pair combined to produce a book: Snarls from the Tea-Tree: Big Cat Folklore. Waldron said that while ideas of yowies, bunyips and other fabulous beasts can be traced to the creation myths of different Aboriginal communities, the big cat idea arrived with the Europeans.

”Big cat stories go way back into the 19th century,” he said.

”Settlers found themselves in an alien landscape, and they had to try to make sense of things such as stock predation and farm failures.

”Their tools for doing this derived from European colonial experience in Africa and Asia – where there were big, dangerous animals, including big cats.”

Some early settlers, he said, were startled that there were no monkeys in Australia. In 1826, settlers visiting Rottnest Island heard sounds in the night, noted dig-marks in the ground, and saw a large shape in the water. They concluded the place was home to hippos.

Big cats in the bush are not, in one sense, mythical at all. There have been several cases, especially in the later 19th century, when  lions, pumas and so forth have escaped from travelling menageries and nicked off into the scrub. Waldron has a collection of skeletal remnants lodged in Federation University’s library.

The myth kicks in with the idea that these cats somehow survived, bred, and established permanent populations. The usual evidence for this – bizarre stock mutilations – is easily explained.

”Most likely, the mutilations are caused by multiple animals,” said Waldron. ”A wild dog kills the sheep, then a fox has a go, then birds, rats, and so forth. The result looks unusual.”

”The panther is a marsupial,” he says. ”It’s a large marsupial, possibly a relation to the extinct marsupial lion. There have been plenty of sightings around Katoomba.”

He points out that cryptozoologists have a good record of finding ”Lazarus species” – types of animals presumed to be extinct but subsequently rediscovered. If the thylacine turns out not to be extinct, it will be a cryptozoologist who finds it, if only because no one else is looking.

”I think there is something similar between cryptozoologists and people who search for aliens, for instance,” Laurence said. ”There’s a desire for mystery, a love of the notion of something out there that we don’t understand. It touches something deep in the human spirit.”

As for Sykes’ possible Himalayan bear-cum-yeti discovery, Laurence is waiting for the full results to be published.

”A giant bear there would be very remarkable,” he said. ”What’s its food base? I’m a bit leery about it, but it’s certainly put the cat among the pigeons.”