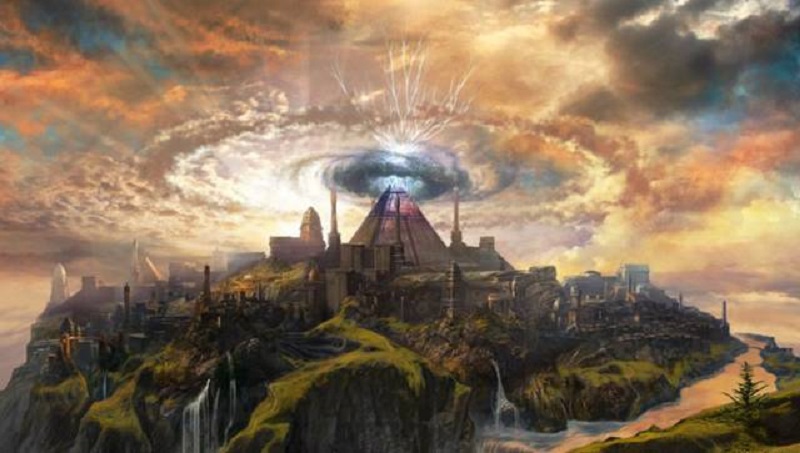 Knowledge about Atlantis hides a terrible secret, otherwise why does humanity know so little about it today? And yet, the existence of Atlantis has been indisputably proven by many researchers; there is information about it in ancient sources, but often in a veiled form. Thanks to Plato, we know what the inhabitants of the mysterious civilization called their continent.

The history of Atlantis and all the legends about it were transmitted, as is known, by Plato in his dialogues “Timaeus” and “Critias”. Plato, as a child, heard about it from his great-grandfather Critias, a ninety-year-old elder who in his youth heard about it from Solon, one of the seven wise men of Greece, a friend of his father Dropides. We believe that it is difficult to find a more reliable source.

The reason for the concealment by the ancient knowledge of even the very existence of Atlantis was in that irresistible horror that was inspired by the very memory of the last Atlanteans and the monstrous power of black magic, which was owned and freely used by the morally degraded remnants of the once bright and beautiful Fourth Race.

This, again, was known to the priests of Egypt and Plato himself, and only a solemn oath of secrecy, which extended even to the mysteries of the Neoplatonists, prevented the disclosure of the whole truth.

Indeed, the knowledge of the last island of Atlantis was so secret – thanks to those superhuman powers possessed by its inhabitants, the last direct descendants of the Gods or Divine Kings, as it was thought – that the disclosure of its location and existence was punishable by death. Theopompus asserts the same thing in his work Meropis when he speaks of the Phoenicians as the only navigators in the waters that washed the western coast of Africa, and who did this with such secrecy that very often they themselves sank their own ships in order to destroy all traces of them for overly curious strangers.

If the Diocletianic Persecution had not burned down the esoteric writings of the Egyptians in 296 AC along with their books on Alchemy, just as Caesar burned 700,000 scrolls in Alexandria; and Leo the Isaurian – 300,000 in Constantinople in the 8th century; and the Mohammedans, who destroyed everything on which they could find – the world could now know much more about Atlantis. For Alchemy had Atlantis as its home during the Fourth Race and was revived again only in Egypt.

The horror of the corrupting influence of morally fallen people, reinforced by the techniques of black magic, forced the ancient people of the Fifth Race, who lived in different countries, not only to hide the fact of the existence of the dead continent and its population, but even to avoid mentioning the real names and surnames, inventing their own, or translating the meaning of ancient names into their languages.

Atlantis is often mentioned under a different name, unknown to our interpreters. The power of names is great, and this has been known since the time when the first people were instructed by Divine Teachers. And since Solon studied this, he could have translated the names of the “Atlanteans” into names names invented by himself.

In connection with the mainland of Atlantis, it is advisable to bear in mind that the narratives that have come down to us from the ancient Greek writers contain mixed statements, some referring to the large Continent, and others to the last, small island of Poseidonis. It has become customary to accept them all, as referring only to the latter, but the incorrectness of this becomes obvious, due to the inconsistency of various statements about the size, etc. of Atlantis.

The real truth is that magic is still in full swing among mankind, no matter how blind mankind may remain to its silent presence and influence on its members. In regard to its daily and hourly beneficial and harmful effects. The world is full of such unconscious sorcerers – in politics as well as in everyday life, in the church as well as in the citadel of free thought.