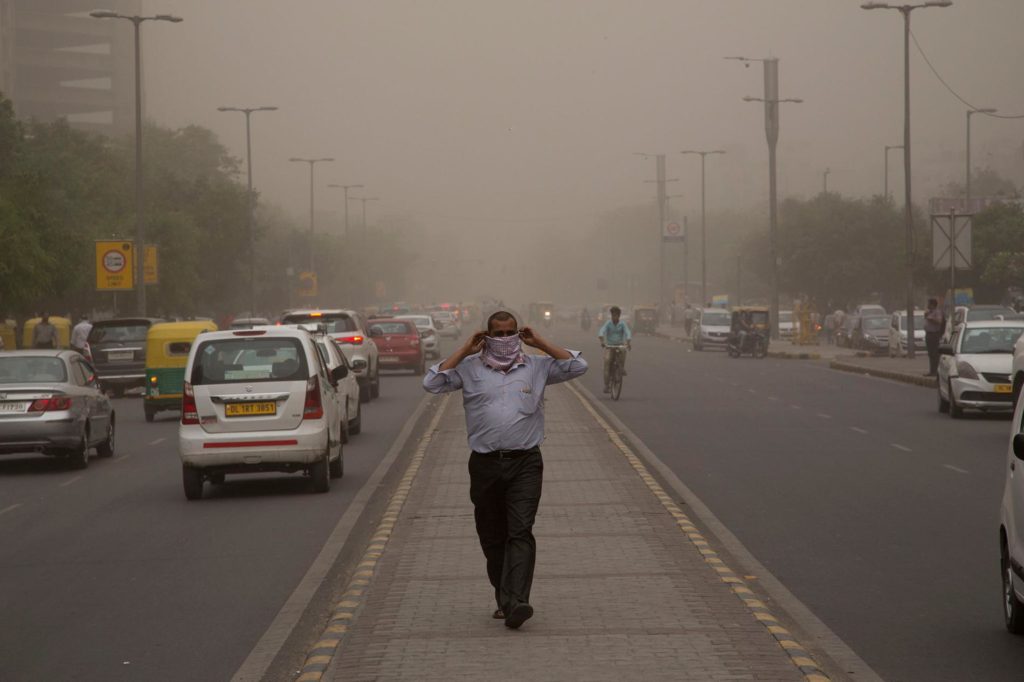 A man wraps a scarf around his nose as a dust storm envelops the city in New Delhi, India. Photograph by Manish Swarup, AP

The onset of India’s monsoon season isn’t coming quietly for the northern part of the country. At least 100 people were recently killed by a massive dust storm that swept through the region on Wednesday night.

According to local reports, many of the fatalities occurred when intense wind knocked over large structures, killing or injuring those in its way.

Dust storms are an annual weather pattern seen in the region. The scale and intensity of this most recent storm, however, surprised officials on the ground. It stretched from the western state of Rajasthan to the eastern state of Uttar Pradesh and hit Delhi, which lies between them.

In past years, fatalities from the dust storms rarely caused more than a dozen fatalities.

Speaking with the BBC, secretary for disaster management and relief in Rajasthan Hemant Gera said, “I’ve been in the office for 20 years and this is the worst I’ve seen.”

What made the landlocked storm so deadly?

“The villain was a huge thunderstorm complex that swept through the area overnight, generating high winds that also carried lots of dust,” says Bob Henson, a meteorologist and writer at Weather Underground. “It appears the strong winds were probably downbursts, similar to those that can strike the central and eastern United States during intense thunderstorms.”

As the name implies, a downburst is characterized by intense, downward air movements during thunderstorms. They can produce some of the strongest wind gusts of all weather patterns. As the downward air hits the ground, it moves outward and back up. (Read about why these Indian farmers are protesting with skulls.)

While downbursts can span distances over 200 miles, some are more concentrated, impacting ground only a mile across. Downbursts smaller than 2.5 miles are called microbursts.

According to Henson, the dust itself likely did little to influence the storm’s intensity, but dry air could have intensified the downbursts. (This monster dust storm swept through the Middle East three years ago.)

Meteorologists speaking with Indian news outlet the Hindustan Times noted that the region’s unusually warm weather may have also intensified the storm. Earlier this week, temperatures in Rajasthan were as high as 113 degrees Fahrenheit.

Ken Waters is an expert on dust storms for the National Weather Service. He says that, while dust was present in these storms, what really delivered the biggest punches was the wind.

“Primarily [dust storms] effect transportation. The dust can take us by surprise, and you have zero visibility. You don’t even know you’re on the road,” he says, adding that dust storms can also cause health-related issues.

In this article:dust storms, India