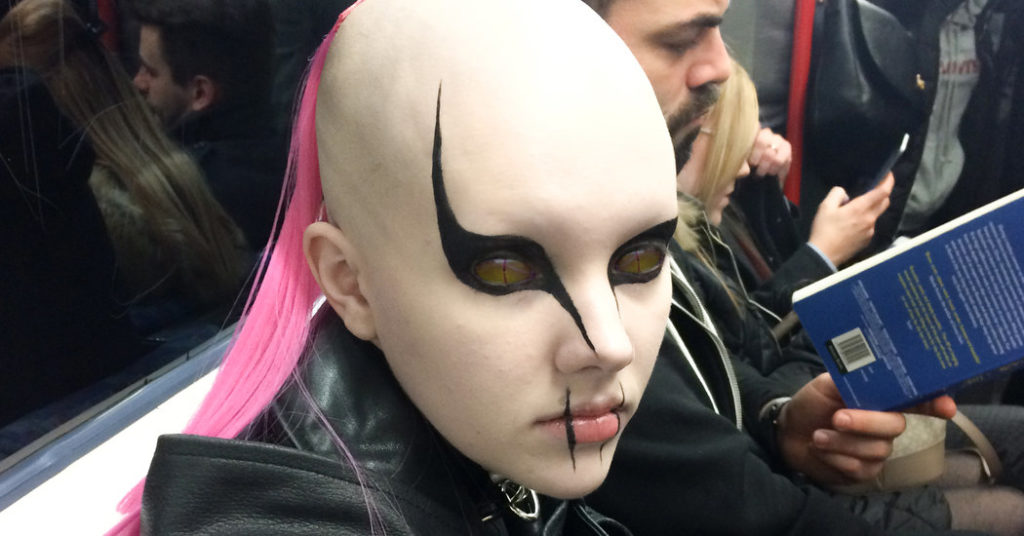 Forget about a dab of blush here, a little highlighter there — beauty today is about shaving your head, shaving your brows, adding a third or fourth eye and bleeding black from your hyper-colored eyeballs.

Pimple positivity, extreme contouring, face-morphing filters — it goes without saying that social media has rapidly shifted the meaning of beauty, and the beauty industry, in both brilliantly liberating and potentially damaging ways. The medium lends itself to striking, shocking and complex make-up, and a kind of alien glamour has been germinating on Instagram for a few years now.

At first there were a handful of experimenters creating extreme looks in-between the endless posts of dewy no-make-up make-up looks spurred by brands like Glossier, and the ultra-layered make-up of contouring propelled by the Kardashian krew — polar opposite ideas of unattainable perfection. Since then alien beauty has been blooming, with the likes of Salvia, MLMA, and Aryuna, racking up big followings, and more and more accounts springing up with others pursuing a similar aesthetic. The duo known as Fecal Matter are one of the earliest, and most widely known progenitors of post-humanist beauty, interviewed by Vogue and the NYT, as well as i-D.

Emma Grace Bailey, beauty editor at trend forecasting company WGSN, has been tracking the trend since it started gathering pace on Instagram. “We first highlighted the emergence of dark, gothic, alien-like beauty back in 2016,” Emma says. “A bubble of make-up artists that found creativity in the macabre and the dark started gaining attention on social media, drawing in fans who reveled in their rejection of classic beauty norms.” She’s seen this trend grow from pretty understated to the maximum, shape-shifting impact it’s reached today.

Beauty looks that elevate what society traditionally considered ugly or weird is hardly a new idea. Punk did it — “there you get the emergence of a very positive idea of the ugly and the ugly as being a legitimate alternative aesthetic”, says Dr. Ruth — goths have been at it for ages, new romantics and the New York hardcore scene all loved messing with transgressive looks. As recently as Emo and K-pop, extreme beauty has been a part of music subculture — hair and make-up serving alongside clothing as key markers of belonging to that tribe. These visual signals were extensions of subcultures, a way of embodying the music and its surrounding scene while out in the world.

This beauty movement is different, unconnected to a specific scene, though no less driven by exploring selfhood and ideals. As identity is by and large now constructed online, subversive beauty is its own subculture, albeit one that doesn’t often exist in any other substantial way. Salvia, Fecal Matter, and Aryuna aren’t directly sharing beauty tips or hanging out, they’re not creating anything together or pledging allegiance to the same musical idols. They exist as a group because we group them together. Though Steven Raj Bhaskaran and Hannah Rose Dalton, a.k.a. Fecal Matter, do in some sense feel part of a community. “What we do and why we do it is really to I guess change society in some way and implement some level of freedom and non-judgemental reaction,” says Stephen, as the duo Facetime i-D from their home of Montreal. “So for us, when we see people who look like us or anybody who’s challenging what it means to look human or what it means to be normal… we always feel a sense of community with that, a sense that we’re all fighting for the same thing, essentially for change.”

Challenging binary ideas of gender is a clear part of the impetus behind alien glamour; Steven says it’s an important aspect of why he looks the way he does, and drag artists like Hungry and Salvia are big into reimagining what a face and body can look like. “Unapologetic embracing of unique identities, personas and genders is a key reason for the rise in alien beauty this year,” says Emma. “These artists are demonstrating the true power of beauty to morph, shift, and ultimately build yourself into whoever you want to be, regardless of how you were born, and showing that doing so won’t see you outcast from society.”

But Hannah and Steven, who don’t do alien beauty just for Instagram, but live it out in the world every day, have encountered plenty of negativity and abuse. “To get to where we are right now, where we have an audience and people who like what we do, was a very difficult journey, especially during eras when fashion was very stripped back and very ‘let’s go normcore’,” Stephen says. “So it’s interesting that it’s now a beauty trend, because when we were first doing it it was considered ugly, and non-fashionable and disgusting. Still today we get all of that, but at the same it’s fascinating to see young people getting into this new perspective that maybe we were a part of creating and maybe we were a part of bringing it to forefront, but now it’s out of our hands and it’s something that is bigger.”

Dr Ruth points out a connection between this beauty look and avant-garde art by the likes of Hans Bellmer, George Grosz, and Otto Dix. “You have this sort of celebration of an ugly underworld and making it beautiful and bringing it to the fore. So things that would have been shameful or hidden away — and again it’s a demonstration of artistic talent and capacity.” A number of those creating these extreme, otherworldly beauty looks are doing so as part of a wider creative process — Fecal Matter have a clothing label and make music. MLMA doesn’t consider what she does to be a beauty trend. “I’m an artist. Not just digital or make-up. If you see my page on IG, it’s filled with mixed media. I also do music so I try to avoid putting any labels on myself other than an artist,” she says by email.

In referencing artists like Hans Bellmer, Dr. Ruth is linking the political climate that he and his peers were working in with the current situation “You think about German modernism, it was happening in the face of a rising fascism, and how much is this a sort of resistance to other kinds of oppression or totalitarianism or the imposition of normative behaviors, how much it’s a reflection of a greater freedom of expression and how much it’s a response to a clamping down on freedoms…”

Emily agrees with this sentiment. “In a world that seems more disordered and in disarray than it has in decades, controlled by the smallest pocket of biased leaders, our sense of security is dissipating. And in order to fight back against the stream of racism, sexism, and terrorism that is being fed to us via the media, younger generations are forming pockets of defiance and protest on their terms.”

Like beauty, the meaning of subculture has been indelibly changed by social media. It splinters, blurs, builds on, and rapidly transforms group mentality. But it is its own outlet for exploring identity and making political statements, as subcultures traditionally were. Alien beauty may move on in the blink of three eyes, it may trace only loose connections between people all over the globe with little else linking them, but right now, it means something.

In this article:alien beauty, post-humanist beauty