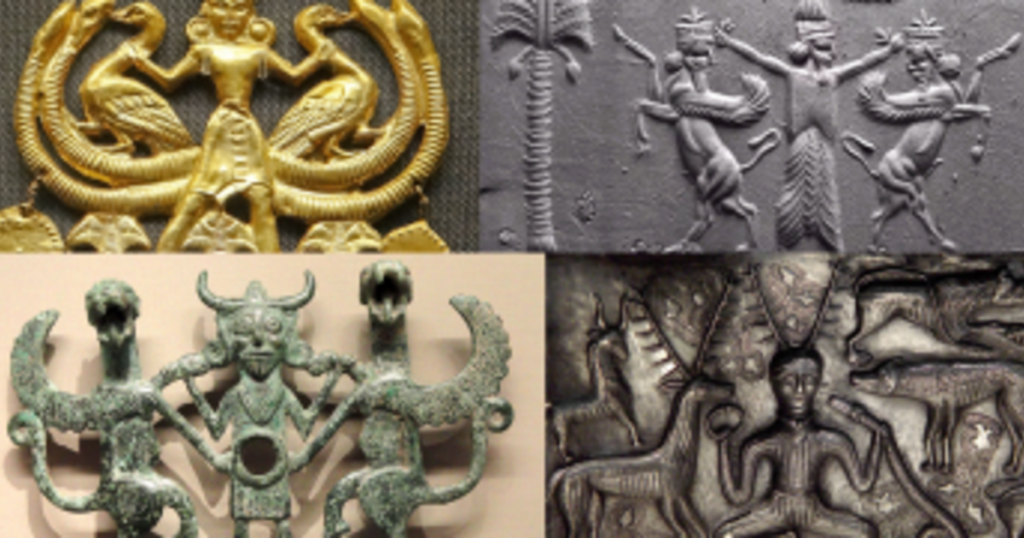 So far, anyone who has even accidentally seen ancient art has noticed that the same patterns, symbols and motifs appear on the globe. Is it just a coincidence? Or were ancient cultures much more connected than we currently understand? You don’t have to be an academic or a professional archeologist to see ancient art and ask yourself questions.

One such example, by many, is the recurring motive of something that some call the “Master of Animals.” Also referred to as “Animal Master” and “Animal Master”, or Potnia Theron. These images date back to 4000 BC. As you like to call them, these are images of a human, god or goddess holding two animals or objects on each side.

According to researcher and writer Richard Casaro, these are icons of “bogoise” and represent universal knowledge. He analyzed hundreds of similar examples across the globe, along with similar ancient pyramidal structures.

After these motives are met again and again all over the world, it is interesting to ask ourselves how this is possible. Is it just a matter of reaching the same decorative symbolism by accident? Or do we see evidence of communication over thousands of miles when this was considered impossible in our time?

Aside from this mystery, what does this symbolism really mean? We can argue that these images show dominance over the animal kingdom of ancient heroes and heroines. Does this idea sound right? And maybe we are looking at images representing ancient high-intelligence creatures conveying knowledge of agriculture or technology, as some theories about the ancient astronaut suggest?

We cannot say anything definite here, but we make you wonder and enjoy these beautiful ancient works of art. The more we study them, the more questions arise and the more our true understanding of history is called into question.

One of the earliest examples is Turkey’s “Sitting Woman of Chatalhuyuk”. Made of baked Neolithic clay, the ceramic artifact was created in 6000 BC. It is commonly known as the Mother Goddess and was discovered in 1961.

“In one of the temples in a barn, a 12 cm statue of a large woman was found sitting on a throne with two leopards on either side of her. The statue depicts a woman giving birth when the baby’s head is visible. In addition to leopards and vultures, there are bulls next to the woman. Only the heads of bulls are depicted in the murals. “ 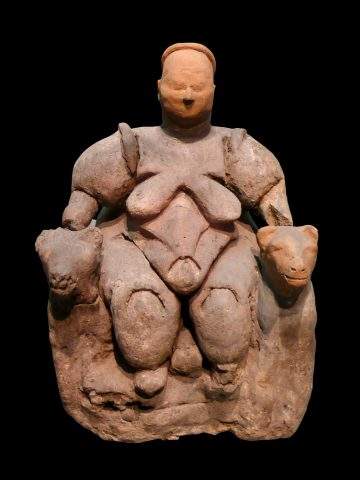 The Sitting Goddess-Mother by Catal Hyuk: Head is Restoration, Museum of Anatolian Civilizations by Nevitt Dilmen

We see some of the first images of the motif on cylindrical seals of ancient Middle East and Mesopotamia. Below we see the Achaemenid print impression with the Persian king taming two Mesopotamian lamas who were protective deities. 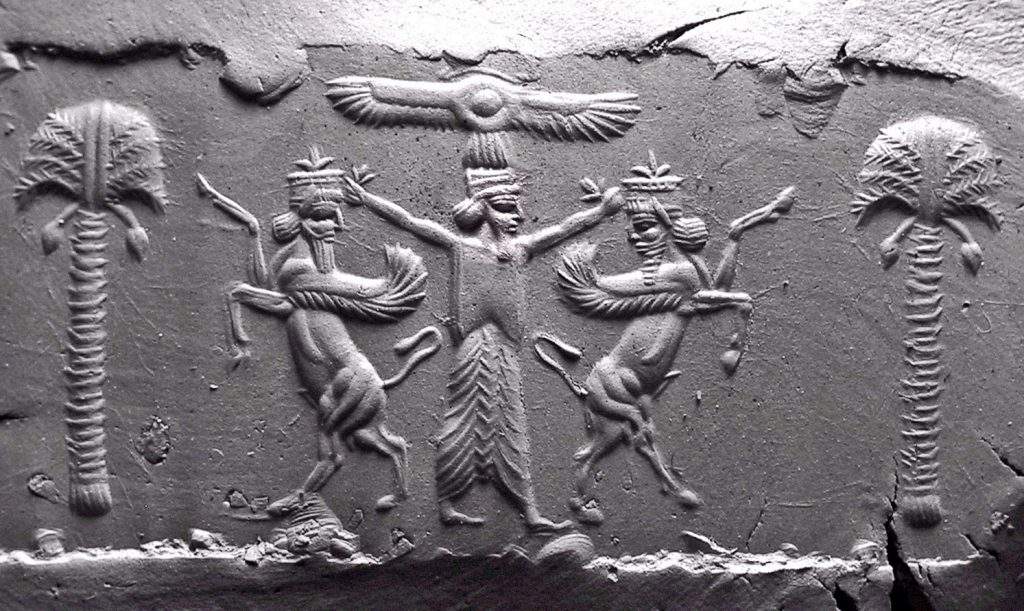 This may represent the naked Enkidu with the god of flocks Shakan, as seen in another print below. Enkidu was a central figure in the ancient Mesopotamian “Epic of Gilgamesh.” 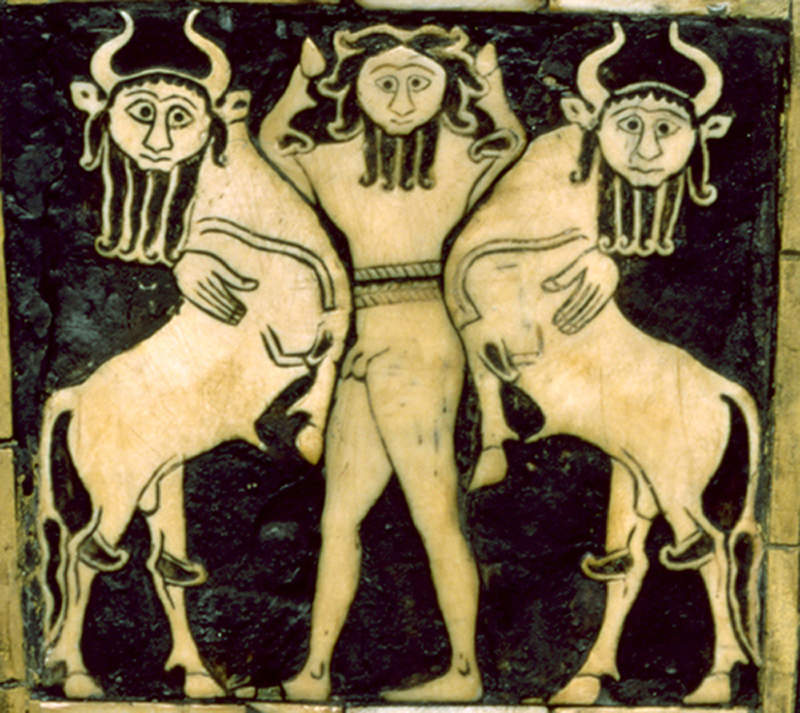 Protecting master of the harp found in Ur. Dated around 2600 BC

In present-day Iraq, we see this object with a strange shape from 2500 BC. The shape looks similar to the object so often seen in the hands of ancient creatures in carvings around the world. It was sometimes called the ancient handbag, but what really was it? This object seems to combine the Master of Animals with the shape of an ancient handbag. 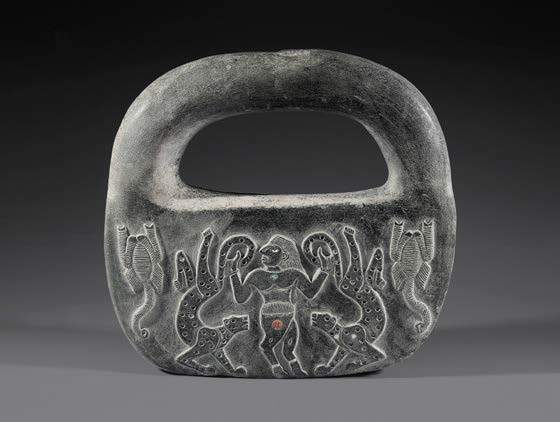 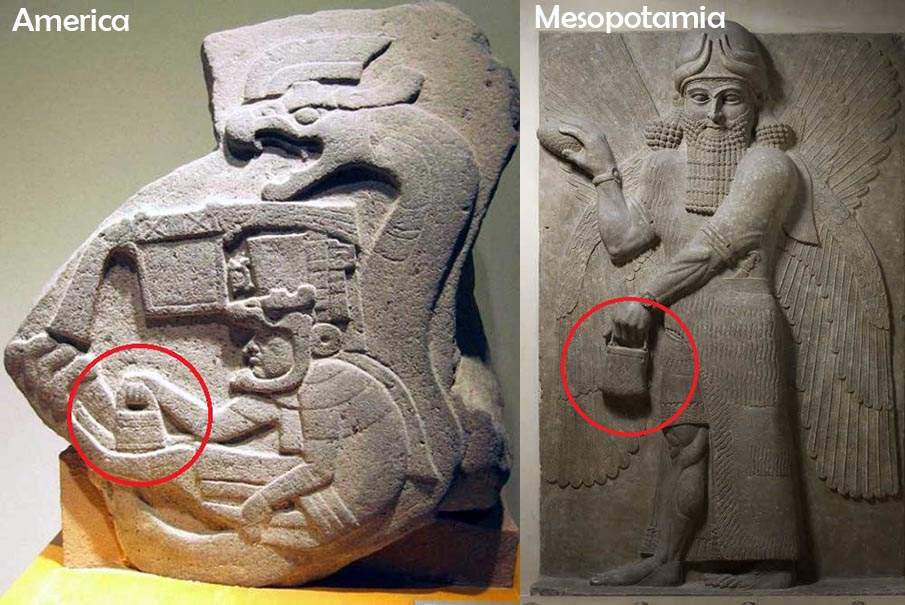 The Mysterious Handbag of the Gods: Depicted in Sumer, America and Goebbeck Tepe

We are now moving to the Indus civilization from South Asia. We see a Pashupati, or Animal Master, who is Pashupati in Sanskrit. The seated figure is surrounded by animals. 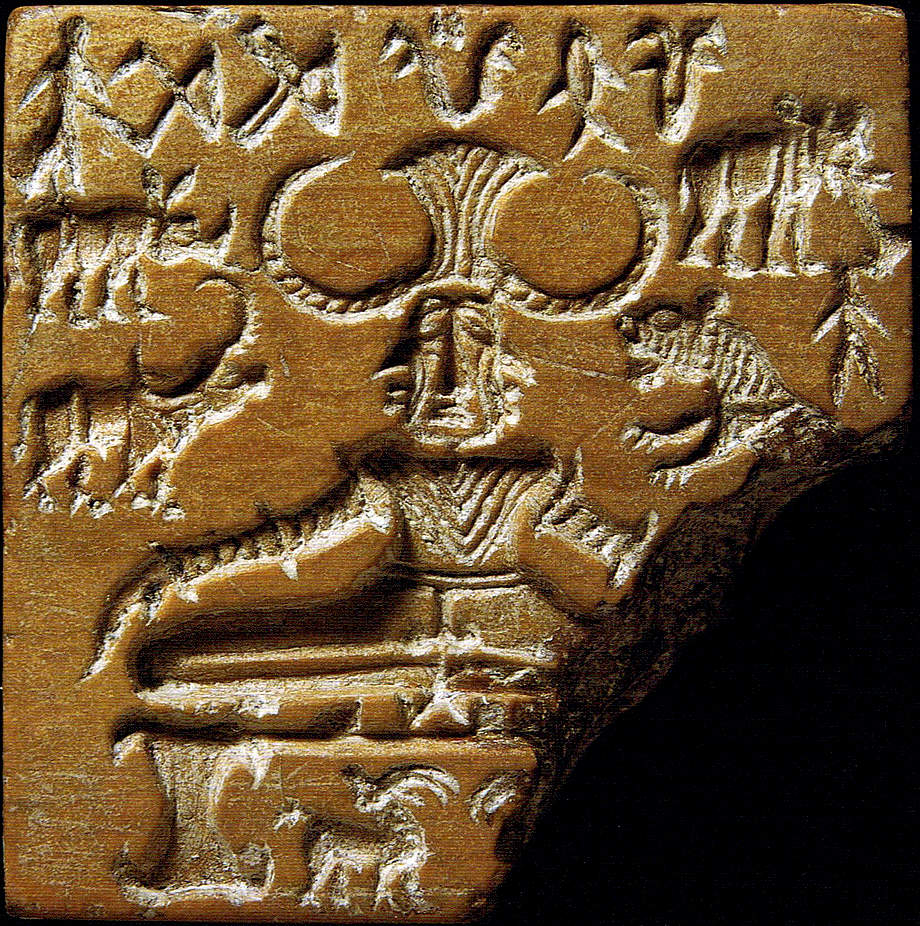 “A seal discovered during excavations at the Mohenjo-Daro archaeological site in the Indus Valley draws attention as a likely representation of a figure of a ‘yogi’ or ‘proto-Shiva.’ This seal of Pashupati (the lord of animals, in Sanskrit pashupati) shows a seated figure, probably iphiphaly, surrounded by animals. There are three faces to this figure, one on each side and this may be the four-headed Brahma, with the fourth chapter hiding behind. One can clearly see the long nose and the wide lips on both sides. “

Let’s take a look at the now famous ivory and flint knife called the Gebel el-Arak Knife from Abydos, Egypt. The site dates from about 3000-3200 BC. according to conventional knowledge. The question of why an apparently Sumerian king was found on an ancient Egyptian artifact puzzles the researchers. The figure may represent the “Animal Master”, the god El, Meskiagkasher (the biblical Hus), the Sumerian king of Uruk, or simply the “warrior.”

As evidenced by his pastoral hat, one researcher writes:

“The king of Uruk seems to always be surrounded by animals. As explained in The King of Uruk, “The continuous presence of animals in the iconography of the Uruk king aims to establish his identity as a shepherd, guardian and protector of his flock, the people.” The Uruk king had to use paintings instead of writing. to show that he is the shepherd king. This is because the Sumerian letter was still in the process of being invented.” 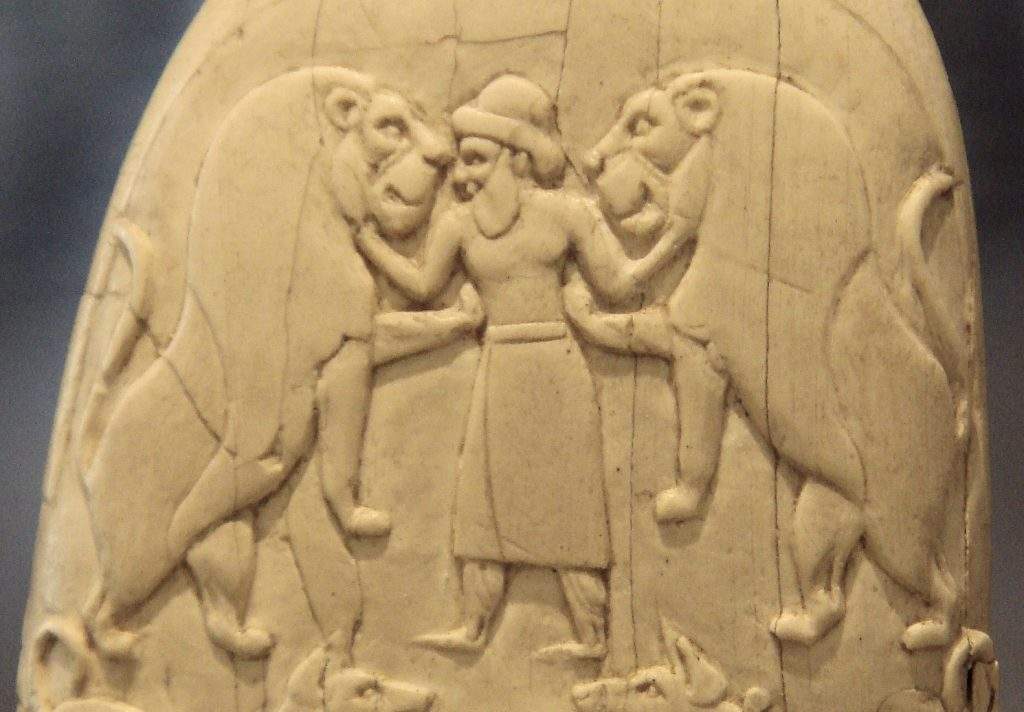 Another example that draws references from both Egypt and ancient Mesopotamia is this gold medallion showing the Master of Animals. Although Egyptian, it is Minoan, dating from 1700-1500 BC. It is now in the British Museum. Note that the snake looks eerily similar to the one on the Gundestrup Cauldron from Denmark below. 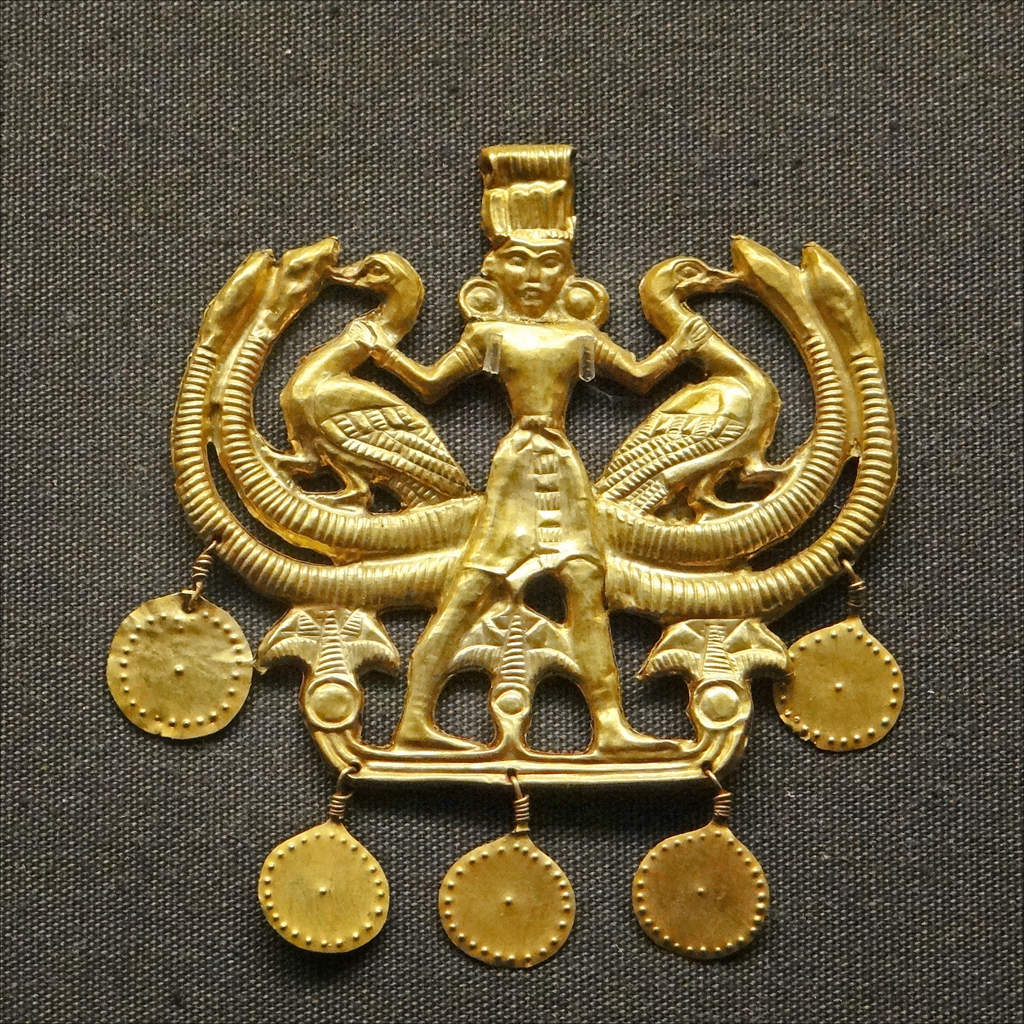 Moving to ancient Greece, we see a female goddess, portrayed as the “Mistress of Animals” or Potnia Theron on an archaic ivory meal. 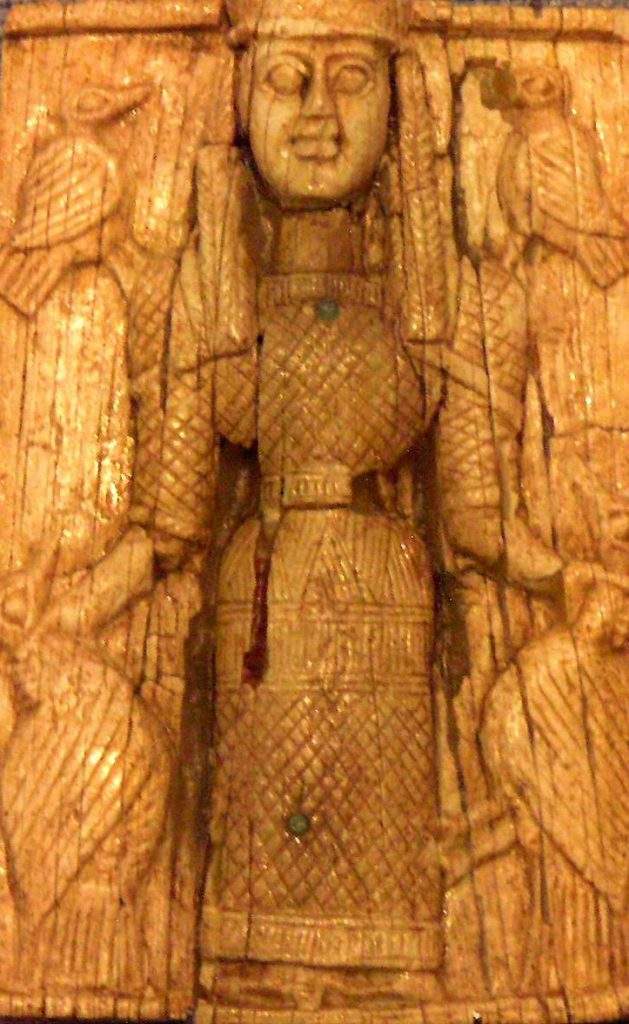 A representation of the goddess Artemis in Potny Theron’s usual posture on an archaic ivory vault, (National Archaeological Museum of Athens) by Marcias.

Nearly 3,000 kilometers from here, we find another animal master in Denmark on the Goodenstrup Boiler, the largest known silver piece from the European Iron Age. The boiler was found in peat bog in 1891 and can be dated to the 2nd or 1st century BC. This time the “animals” in the hands of the figure seem to represent some more misunderstood technology than real snakes. 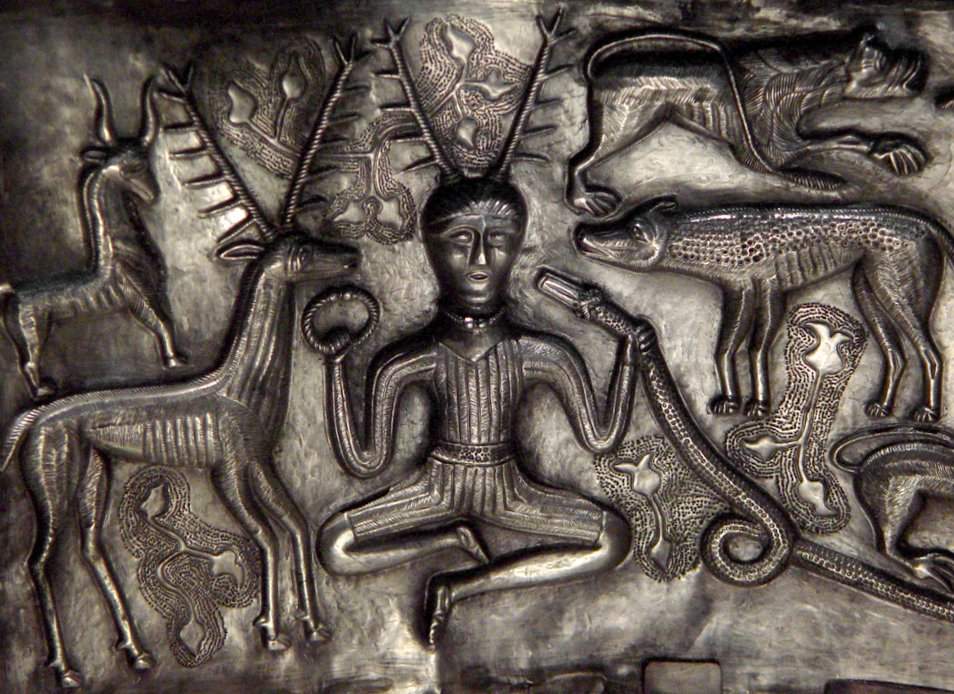 The example below, Luristian bronze, dates from between 1000 and 650 BC. and comes from a mountainous region in western Iran. 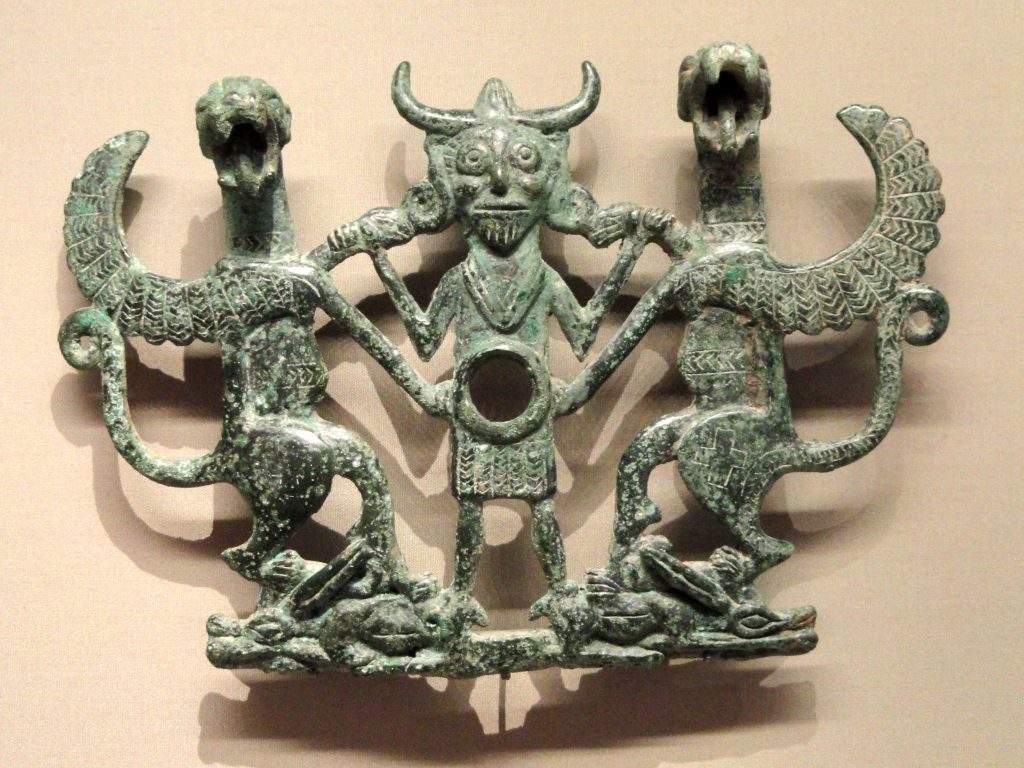 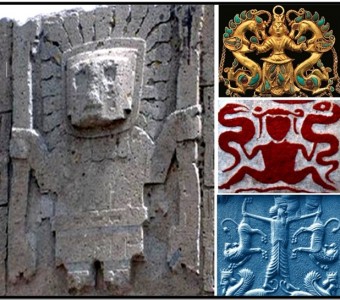