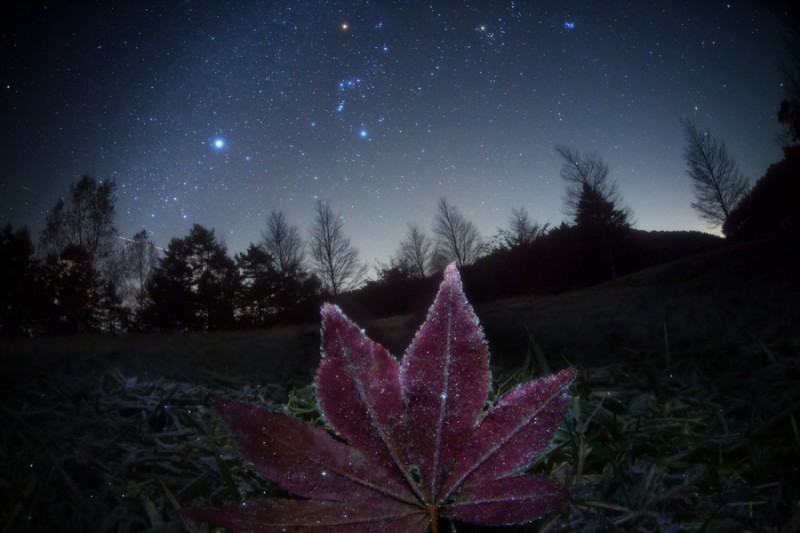 Our ingenious ancestors created unique monuments, calendars and “observatories” that allowed them to track the position of near and far celestial bodies. One of the most studied constellations of ancient times is Orion. Its image was found even on the tusk of a mammoth. The age of the find is 32.5 thousand years.

Scientists from MKU, who studied the ancient Hyperborean sanctuaries in the Kola Peninsula, the White Sea and the North-West of the European part of Russia, connected their findings with conventional lines. On the resulting map, the constellation Orion appeared.

The Tatev swinging pillar-staff (built approximately in 893-895), located on the territory of Armenia, is oriented to the Orion belt – a unique astronomical instrument, “an eternal sentinel of the most accurate space time counting”.

Many, many different places on Earth are associated with this constellation. The list of literature devoted to such studies is increasing every year.

It seems as if each country is pulling the blanket over itself, trying to prove its involvement in the great cosmic power. It so happened historically that for the whole world – for Egypt, for Mexico, for Ancient Babylon and for Ancient Russia – this constellation was the center of the heavens. It has been called Orion since the times of Ancient Greece. The Rusichi called it Kruzhilia or Kolo, associating it with Yarila, the Armenians – Hayk (believing that this is the light of the soul of their ancestor frozen in the sky). The Incas called Orion Chakra. (We hear in this name a combination of something Indian, Ancient Egyptian and Russian – but maybe these are just our speculations. But can the theory, which is very popular today, about the northern roots of the ancient Egyptians, be considered speculation?)

What astronomical objects form the constellation? Betelgeuse, the second brightest star, creates the hunter’s right shoulder, Bellatrix – the left. The Orion Nebula – formed from dust, hydrogen, helium and other ionized gases – is the middle “star” in Orion’s sword that hangs from its belt. The bright near-equatorial star Rigel forms the leg of the mythical character. The most prominent stars in Orion’s belt are the blue-white Alnilam, Mintaka and Alnitak.

It was to them, these three heavenly bodies, that the people paid the most attention: the Germans had Three Plows, the Belarusians had Three Sisters, the Khakas had Three Maralukhs, the Eskimos had Three Men, the Kazakhs had Three Arkhars, etc. Maybe (this is just a hypothesis) the number three became sacred precisely because of the star belt.

But why is Orion so important? For what reason are many archaeological monuments and structures oriented towards him and correlated with his movement? “What is above is similar to what is below” – this principle is illustrated by the Egyptian pyramids, which are terrestrial copies, a three-dimensional map, an imitation of the brightest stars of Orion. And not only them. The two pyramids of Teotihuacan, together with the temple of Quetzalcoatl, are located in the same way.

Believe it or not, some researchers have noticed similarities between Orion’s belt and three large Martian volcanoes. Just a coincidence? Or are they artificial and not volcanoes at all? .. We do not know for sure. Perhaps such “signs” are left on all planets of the solar system. Not so long ago, the Internet spread the news about the blue pyramids found on Mercury. Maybe some of them also imitate Orion. This means that there were or still have their own civilizations.

The list is endless. But this is not the main point. What did the ancient builders of the pyramids want to say? What idea did you try to convey to your distant descendants?

Representatives of the ancient Egyptian civilization believed that their gods came from heaven, having flown from Orion and Sirius in human form. Orion (in particular, the star Rigel) for them was associated with Sah – the king of the stars and the patron saint of the dead, and later with the god Osiris; Sirius symbolized the goddess Isis. It was believed that both of these deities created humanity and that the souls of the dead pharaohs returned to Orion to be reborn later:

“You are asleep so that you can wake up. You are dying so you can live. ”

As scientists write, the associations with Osiris are not accidental here, because the myth of the progenitor, the powerful hunter Orion, is the first image of God in human consciousness, common to all earthlings. God who dies and is reborn. Embodiments of the mystery of life and death.

Hopi Indians live in Central America, whose stone villages once resembled a projection of the constellation Orion at the summer and winter solstices. During ritual dances – possibly echoes of ancient paleocontacts – the local shaman depicts a creature from the Blue Star.

It is impossible to ignore such a relic of a worldwide scale as the sacred Chintamani Stone, from which the Holy Grail traces its history, and the legendary Shambhala, founded by the Great Community of Light on Earth, the Brotherhood of the Teachers of humanity, who promoted the development of our planet. The constellation Orion is the birthplace of the Stone. According to legends, the most important historical shifts occur precisely at the moment when the cosmoplanetary interconnection of Orion, the Stone and its fragment wandering around the world is activated.

It is also believed that in the constellation Orion there is a door to the parallel three-dimensional universe of Unibrong, which is older than ours and is at a higher level of development. Maybe it was from there that our forerunners flew into the solar system?

In this article:featured, Orion/Sirius, Tatev