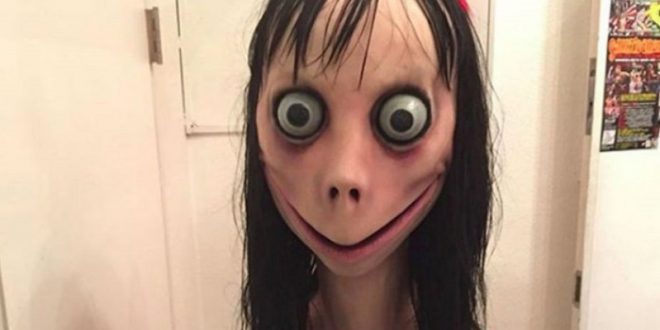 If there is any anonymous creature that has scared the daylight off kids, then Momo is top of the list. Have you ever heard of it? Do you know about Momo?

Momo can scare the daylight out of you! Momo can give some creepy feelings to brave kids.

Momo is the nomenclature of a woman with a pale skin, bird-legs, black hair, large protruding eyes, and long scattered hair. Her face is strange. She has a perennial sinister smile and her two eyes are bulging. She has both Animals and human parts.

The independent.co.uk reports that Momo is a meme that focuses on encouraging young children to add contact and send messages. In return, Momo will send images and information to them. In the UK, the schools and families were warned by the police to advise their children to desist from the Momo challenge as it could be used by cybercriminals to harvest vital personal information from People. Momo operates by tasking the phone owner to perform life threatening activities assignments. Some few kids have lost their lives while trying to fulfill the tasks. A 12-year Old girl was reported to have committed suicide, but when her whatsapp inbox was checked, the chats where she was charged to perform a deadly activity was found. Majority of schools then took it to the internet to publish posts warning parents about it.

Parents were urged to monitor their kids and what they do online.

It is widely accepted that Momo first started in South America, but she has extended her tentacles to Germany, France, and the United States.

The Momo phenomenon exists on WhatsApp and she sends strange and regular messages to people. If you send her a message, then from that moment she will be sending you consistent messages, disturbing images, and items. She tells people that she will tell them so many things about them. Her scary appearance and disturbing messages have made kids to commit suicide.

The issue of Momo can be traced to a Facebook group chat where members of the group chat were challenged to send a message to a strange unknown number. They were warned that the result of sending a message to the number will be detrimental. Despite the warning, many of the members went ahead to send messages to the number only to receive a plethora of replies with scary and violent images. Other replies were threats to the life of the phone owner. Also, they were threatened that personal information about them will be revealed.

The Momo story became very popular in Asia and the south America. Stubborn children were scared by the mention of Momo. They would wake up at the middle of the night screaming and shouting “Momo”. The shrills was all encompassing. They saw Momo as a monster that could hurt them or even kill them.

Momo metamorphosed to become a social media application where users, mostly young children were challenged to carry out difficult life threatening tasks to avoid being hurt by Momo. In some cases, the Momo challenge led to suicide and majority of children’s charity branded it as a hoax.  Momo challenge can simply be described as a ” suicide challenge”, and Momo a scary looking avatar of a woman with pale skin sends children images and instructions on how to hurt themselves. Stories of the risks of the momo challenge game became viral. In the UK, the warnings were intense. Schools went on massive sensitization and awareness campaigns about the dangers of the momo challange game. Many frightening headlines were coined from newspaper and news releases about Momo challenge game. In fact, the Momo Game can be likened to the Blue whale challenge.

The issue of Momo became viral and many people were thrown into disarray. Authorities of some countries waded to the issue and warned people against sending a message to a strange number with a strange woman on the profile.

In Spain, the Police released information warning people not to add Momo on their Whatsapp. The issue of Momo has gone viral not just in WhatsApp but across virtually all the social media platforms.

Three phone numbers are popularly known to be affiliated to Momo.

There have been many questions from many social media channels about the existence of Momo and her origin.

One of the most stable answers about the origin of Momo is that the Momo account was opened by a WhatsApp user from one of the Spanish speaking countries. The profile picture of Momo is known to be the image of a bird-woman that was displayed during the Art gallery and exhibition about deadly ghosts in Japan in 2016. Momo sculpture was designed by a Japanese named Keisuke Aiso (AISAWA)

The WhatsApp account user is said to have started the rumour of Momo, respond to every message sent to him with scary images and threats that he will reveal personal information about the owner of the phone.

The dubious rumours of Momo has existed for sometime now and it features some copycat videos and a collection of scary items and well manufactured threats targeted towards squeezing out personal information from kids.

The threat posed by Momo is tantamount to cyberbullying and Information from several sources like WhatsApp and YouTube. Anonymous life threatening pictures, videos, and messages are usually sent to the kids.

On the whole, the horror around the Momo challenge was terrifying. The Japanese did not create the Momo sculpture for an evil intention. It was a piece of Artwork. They have nothing to do with the Momo challenge game. Whoever misused the image of the Artwork should be a very mischievous person.

*This is a post written by Daisy Ridley. Daisy also writes for websfesto, a blog covering tips and tricks for webmasters.

In this article:Keisuke Aiso, momo