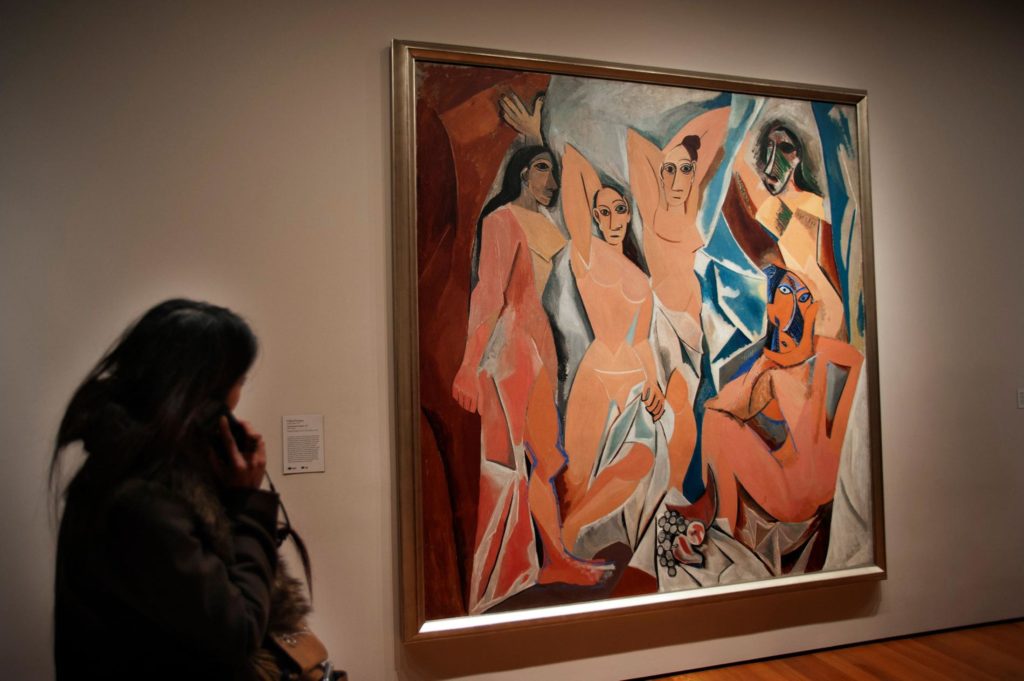 On April 24, Antonio Banderas will strut his stuff as Pablo Picasso in the latest installment of the National Geographic Channel’s Genius series. As an appetizer, this week’s Book Talk features a new book, Picasso and the Painting That Shocked the World, which tells the story of how an impoverished Spanish painter from Barcelona exploded onto the Parisian cultural scene and changed the course of modern art with a single painting.

When National Geographic caught up with the author, Miles Unger, at his home near Boston, he explained Picasso’s complicated relationship to money and fame; why his treatment of women was so awful; and how his masterpiece “Les Demoiselles d’Avignon” took art in a revolutionary new direction and would become the cornerstone of the Museum of Modern Art in New York.

The term genius has become debased through overuse today. But Picasso seems to genuinely merit it. What’s your view?

I’m a little uncomfortable about the term genius because it does seem to be denuded of content. He was incredibly innovative and had enormous artistic courage. That’s one of his qualities. Fewer famous people have painted as many horrible paintings as Picasso. That was intentional. He was not afraid of ugliness; in fact he was much more afraid of prettiness. He feared most of all to adhere to formula, to do something safe. He said that art had to be dangerous, to be offensive, to push boundaries, and he had an enormous drive to do that. If you can call him a genius—and he certainly transformed the course of art, so in that sense it’s valid—what it consists of is his enormous courage and defiance of rules.

One of the keys to his particular form of genius was that he knew the weaknesses of the “enemy” because he had been one of them. He’d been brought up in a very academic tradition by his father and given a classical training, going through all the stages, from etching to classical sculptures. It’s not that he discarded these tools, but he used them for very different purposes. You see his gift for draftsmanship and knowledge of the tools of art, but he took them apart and put them together in unexpected combinations. What distinguishes him from other iconoclasts, though, was that he didn’t simply tear down; he tore down in order to build up again.

We have to address Picasso’s chauvinism, especially now, in the age of #MeToo. How should we view his attitudes and behavior toward women?

He came from a patriarchal family and part of the world in which women were expected to stay at home and take care of their husbands and children. Your social life revolved around men. Men were your intellectual and drinking companions. For sex, you went to the whorehouse, and occasionally came home to your wife. So, as a lover and husband, I think he was horrible. He bullied and domineered the women in his life. He famously said that women were either goddesses or doormats. Usually, they went from being goddesses to doormats.

Some people, when confronted with an artist like Picasso, say he was a great artist but a terrible human being, but that the two have nothing to do with each other. I think that’s a mistake, particularly in the case of Picasso, because his attitudes toward women were so much a part of his art. If you look at “Les Demoiselles D’Avignon,” the fury and conflicted feelings about women all come through. That doesn’t mean we should forgive his treatment of real women. But one should also recognize that art can often come from a very dark and furious place, just as Matisse’s art came from a joyful, sensual, much-less-conflicted place.

One of Picasso’s contemporaries, Andre Salmon, said “Les Demoiselles D’Avignon” was “The incandescent crater from which emerged the fire of present art.” Talk us through the creation of this iconic work.

In 1906, Matisse paints “Bonheur de Vivre,” or “Joy of Life,” which was a smash success and propelled Matisse to the forefront. So Picasso starts thinking of a masterpiece to rival Matisse’s great work, but in his own, unique style. In 1907, he begins to create this counter-masterpiece, based on the image of a whorehouse, which is larger than life and full of demonic figures. If Matisse’s painting was the “Joy of Life,” Picasso’s might be called “The Horror of Sex.”

He gets his patrons, the Steins, to buy him another studio in his apartment in the Bateau Lavoir and sets down to recreate art from the ground up. Picasso is famous for the rapidity with which he painted, but he labored over this work for months, filling notebook after notebook. He is trying to reinvent western pictorial modes, drawing on primitive sources like Iberian art, which he was very influenced by. Later, he visits the ethnographic museum in Paris, where he sees African and New Hebrides sculptures, and Native American works, and is blown away by this completely different approach to form, which is much more conceptual. It is not based on trying to recreate the world that we see, but a symbolic, almost shamanistic approach to the human form.

What he creates after eight agonizing months of struggle is a completely new pictorial form. If you stand in front of “Les Demoiselles d’Avignon,” the impact is incredible; it’s enormously in your face. He pressed everything up to the front of the canvas. There is no empty space, just jagged forms, these horrifying creatures who stare right back at you, the viewer. It creates a completely different way of relating to a painting than the traditional notion of a painting as a window on the world. It’s as if the window had been turned inside out, pressing outward into outer space.

Picasso eventually became fabulously wealthy. But the Bateau Lavoir, or Laundry Barge, the building where he painted his masterpiece, sounds more like a stage set for Les Miserables. Put us inside this world of art, STDs, and squalor.

The Bateau Lavoir was a former piano factory on the top of the hill in Montmartre that was converted into artist studios. There were a bunch of cramped little rooms with flimsy walls and dirt all over the place. There was one toilet at the bottom. It was so hot in the summer you couldn’t wear clothes, but in the winter the tea froze in the cups.

It was mostly artists and their various mistresses and hangers-on. Many were opium smokers. One German artist Picasso invited to be his neighbor in the Bateau Lavoir ended up hanging himself in an opium-induced binge. Picasso lived with a menagerie of cats and dogs, and even had a pet mouse. He claimed he slept with almost every one of his models. His first serious mistress, Fernande Olivier, was originally the mistress of a sculptor who also lived in the Bateau Lavior. It all became very complicated, with bitter arguments, jealousies, and rages, partly fuelled by alcohol and drugs.

Picasso described it later as the happiest time of his life, even though he often didn’t know where his next meal was coming from. He told the story of trekking across Paris in the snow with a painting that he made specifically because he thought it would sell; it was more cheerful than the other stuff he was doing. But he couldn’t even get a sale from his dealer, Berthe Weill, and had to trek back hours through the snow in boots with holes in them. Whenever he did make a sale, he immediately spent his money going into the Lapin Agile, a cabaret in Montmartre, so by the next morning he had no money again. He often resorted to stealing from friends. He once snuck into another artist’s studio and took some money and food off the table. He and his friends cheated the local baker. They’d order from him, then pretend not to be home when the order arrived, so they would not have to pay. They hid from creditors. It was a very difficult life but, in many ways, a very romantic one.

Today, perfumes, pens, and cars are marketed under the Picasso name. The painter would have been appalled, wouldn’t he?

I’m sure he would have been totally disgusted by it. He felt art came from a very dark place, and didn’t like to be branded. He fought for fame all his life and when he finally got it, he treated it with contempt. He hated the phonies who came up and kissed the ring of the great man. Anybody who called him a master would be shouted out of the room. One time, he got so fed up he took out the revolver he’d inherited from Alfred Jarry and began shooting it in the air. He was a belligerent and feisty guy [laughs] who didn’t put up with nonsense. He craved adulation, but he loathed sycophants.

He once said you have to be rich to live like you aren’t interested in money. He had a complicated relationship with his own fame and success. For a while after he married the Russian ballerina Olga Khokhlova, she tried to make him into a proper gentleman, but he soon got totally disgusted with her and with it, and returned to his Bohemian friends. He was also an incredible miser and paranoid about money. He kept all his money safety-pinned in a little pocket inside his jacket and was constantly accusing people of having opened it up and stealing his money.

“Les Demoiselles D’Avignon” now hangs in MOMA in New York. Tell us the story of its journey across the Atlantic and what its legacy is today.

The strange thing about “Les Demoiselles D’Avignon,” which is usually regarded as the key work in the modern era, is that it was almost invisible for many decades. After Picasso painted it in 1907 it was shown a few times to his friends, but the reception was so terrible and people were so shocked and appalled by it that he rolled it up and put it away and it was not seen for many years.

It had already launched a revolution, though. People like Georges Braque and André Derain were blown away and began to paint in that style. Eventually, in a year or two, we have the full-blown movement known as Cubism. Though the painting is buried away, it has an almost cult status but nobody ever sees it until 1916 when André Salmon has a show and it finally gets its name. Then, in the 1920s, André Breton, the inventor of surrealism, rediscovers it and calls it the key work in the history of the modern movement. It spoke to him with its surrealist interest in sex and violence.

Eventually it travels across the Atlantic and Alfred Barr, who is founding the Museum of Modern Art, realizes this is going to be the key work around which he will build the museum. But its meaning has shifted drastically over the years. First, it was seen as the founding work of Cubism. In the 1970s, people began to see what was there all the time, which is a savage, violent sexuality. Today, after more than a hundred years, it’s hard to put oneself back in time and feel the sense of shock that people originally had. But I still think it’s a pretty tough, aggressive painting. It radiates a savage power even to this day.

This interview was edited for length and clarity.