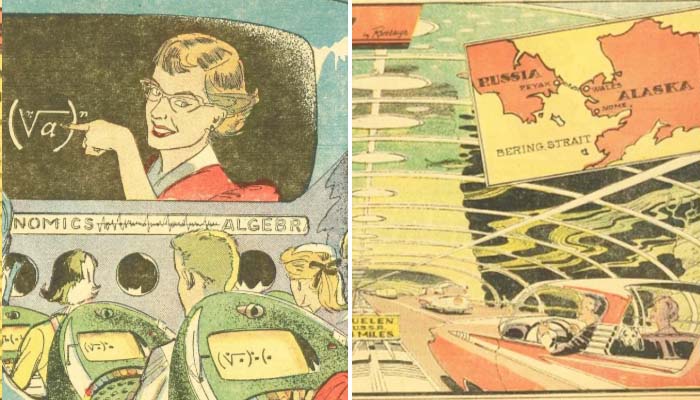 Futurology is a very interesting teaching, which is at the intersection of science, art and common sense. It has nothing to do with predictions, as futurologists always carefully monitor technical innovations and try to guess the vector of human development.

Sometimes it turns out well, and then we admire their sagacity, sometimes the trends are guessed wrong, and in this case it looks funny. Not so long ago, another trend has become fashionable – retrofuturism – the study of forecasts made 50-100 years ago. Let’s check together what from the comics of the famous American futurist artist Arthur Radebo today has come true.

Arthur Radebo spent many years in advertising, until in 1958, where he found his own unique direction – he began to draw bright, optimistic comics that tell about life in the near future. For five years, the Chicago Tribune media syndicate published these illustrations in a separate section. The name of the column, “Closer Than We Think,” has become prophetic. Of course, not all of them, but many of these forecasts really came true, not even a hundred years have passed, some are likely to become a reality in the near future. Today, the name of Arthur Radebo is again popular – users of the World Wide Web are happy to share his “predictions from the past”, discussing what else might come true.

A video-enabled telephone seemed close, but difficult to achieve, for a long time. Technically, people could have done this for a long time, the question was probably in cost. Today, many opportunities are realized thanks to the Internet, but none of the futurists of that time, unfortunately, did not predict it.

The ability to instantly change the color of your favorite car in your mood may probably seem attractive, but it has not yet been realized. Today, even changing the color of the nails takes longer than painting the car in this picture. Such technologies, by the way, were found a couple of times in semi-fantastic spy films, where a color change of the machine could help agents hide from enemies.

But drones and electric cars can rightfully be considered true predictions. It is expected that in the near future our roads will be filled with them. True, the highway connecting Russia and Alaska, as in the figure below, has not yet been designed.

Many “predictions” of Arthur Radebo related to home furnishings and everyday life – this topic is close to people, and modern household appliances are really booming, so here the artist’s imagination has unfolded. He guessed something right: with huge televisions today, for example, you will not surprise anyone. It is hoped that multifunctional housework robots are also somewhere on the way for developers.

In the near future, according to the artist, the house itself should be under a hood, in the literal sense – it’s raining outside, and it’s dry and warm in your micro-universe, it’s time to cut the lawn.

Probably, by 2020, according to people from the 50s, mankind should have defeated most diseases, and in case of injuries – had the opportunity to simply “assemble” a person from spare parts, i.e. organs. This is not to say that this forecast looked silly today. Diseases, of course, do occur, but organ transplantation has already been practiced for quite some time. The laboratories are making attempts to really grow “spare parts” for humans.

And, of course, the artist could not remain silent about the main dream of mankind. In his future, people fly with the help of small personal helicopters. Something similar already exists, of course, it remains to wait for the mini-flying means to come into use, and we can assume that the future has come.

The next few predictions can also rightfully be considered fulfilled.

Distance learning – the issue is more relevant today than ever