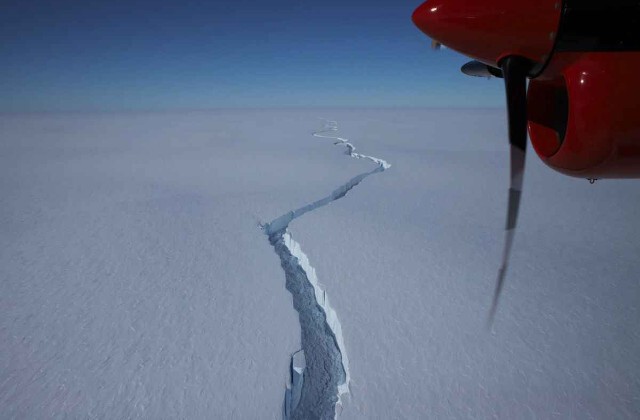 In one of the most vulnerable glaciers of the South Pole of the Earth – Antarctica, a giant fissure 112 kilometers long was discovered. According to scientists, its appearance suggests that the ice massif has begun to disintegrate, and a huge iceberg is forming in its place. It is reported by Live Science.

For a long time, scientists – climatologists and oceanologists, were convinced that climate change threatens to destroy mainly the northern ice reserves on Earth – the Greenland glaciers and the northern polar ice cap. However, recent research has changed these views.

Scientists are finding more and more evidence that the first may disappear not the northern ice, but part of the glaciers of Antarctica. And these changes could lead to a catastrophic rise in sea levels. For this reason, NASA conducts continuous observations of the state of the southern ice as part of the IceBridge project, studying them using reconnaissance aircraft.

The Larsen Glacier, located on the eastern coast of the Antarctic Peninsula, which began to disintegrate in 1995, is the most vulnerable and almost guaranteed candidate for destruction. The last fragments of this glacier, as shown by data from IceBridge, were to begin their journey into oblivion this summer.

The latest images from aircraft obtained by NASA in late November and early December confirm the assumptions of scientists. They clearly show that in the Larsen C glacier, the last part of the Larsen ice massif, a giant crack has arisen 112 kilometers long, about 100 meters wide and about 500 meters deep.

The time of the appearance of this crack is the past, and maybe even the year before last. This confirms fears that the decay of the glacial massif is proceeding extremely quickly. At the same time, the crack continues to grow and already with the onset of summer in the southern hemisphere, the Larsen Glacier will turn into a giant iceberg, whose area will be about 6,500 square kilometers, and this is comparable to the size of the entire American state of Delaware.

The disintegration of the Larsen C glacier will accelerate the melting and “sliding” of the continental glaciers of Antarctica, which are now being held in place by this sea ice massif.

The ice sheet in western Antarctica has cracked from the inside, the researchers suggest, which may explain why large icebergs are constantly breaking away from it and why it collapses so quickly.

At the same time, scientists from a British university came to the conclusion that a new ice age could begin on Earth in 15 years. In their opinion, a significant decrease in solar activity has been observed recently. According to researchers, by 2020, the 24th cycle of activity of the star will end, after which a long period of calm will begin.

Accordingly, a new ice age may begin on our planet, which has already been called the Maunder minimum. A similar process was already taking place on Earth in the years 1645-1715. Then the average air temperature dropped by 1.3 degrees, which led to the loss of crops and massive hunger.

At the same time, scientists were surprised to find that glaciers in the Central Asian mountains of Karakorum are growing rapidly. The point is not at all about the “spreading” of the ice cover there but in a full-fledged increase, the thickness of the glacier also increases.

In this article:Antarctica Glacier, Nasa