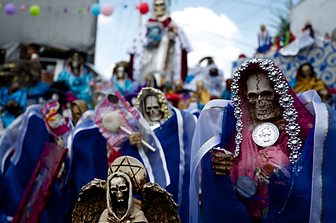 And as a result, they called for a nation-wide exorcism of Mexico, carried out quietly last month in the cathedral of San Luis Potosí.

High levels of violence, as well as drug cartels and abortion in the country, were the motivation behind the special rite of exorcism, known as “Exorcismo Magno.”

Cardinal Juan Sandoval Íñiguez, the archbishop emeritus of Guadalajara, presided at the closed doors ceremony, the first ever in the history of Mexico.

The event was not made known to the general public beforehand. According to Archbishop Cabrero, the reserved character of the May 20 ceremony was intended to avoid any misguided interpretations of the ritual.

But how can an entire country become infested by demons to the point that it’s necessary to resort to an Exorcismo Magno?

“To the extent sin increases more and more in a country, to that extent it becomes easier for the demons to tempt (people),” Fr. Fortea told CNA.

The Spanish exorcist warned that “to the extent there is more witchcraft and Satanism going on in a country, to that extent there will be more extraordinary manifestations of those powers of darkness.”

Fr. Fortea said that “the exorcism performed in San Luís Potosí is the first ever carried out in Mexico in which the exorcists came from different parts of the country and gathered together to exorcise the powers of darkness, not from a person, but from the whole country.”

“This rite of exorcism, beautiful and liturgical, had never before taken place in any part of the world.  Although it had taken place in a private manner as when Saint Francis (exorcised) the Italian city of Arezzo,” he stated.

The Spanish exorcist explained, however, that the celebration of this ritual will not automatically change the difficult situation Mexico is going through in a single day.

“It would be a big mistake to think that by performing a full scale exorcism of the country everything would automatically change right away.”

Nevertheless, he emphasized that “if with the power we’ve received from Christ we expel the demons from a country, this will certainly have positive repercussions, because we’ll make a great number of the tempters flee, even if this exorcism is partial.”

“We don’t drive out all the evil spirits from a country with just one ceremony. But even though all will not be expelled, those that were removed are not there anymore.”

Fr. Fortea emphasized that “when the exorcists of a country drive out its demons, it has to be done in faith. You’re not going to see anything, feel anything, there’s not going to be any extraordinary phenomenon. We have to have faith that God conferred on the apostles a power, and that we can use this power.”

“In any case, if this ritual were to be carried out in more countries once year, before or after, this would put an end to any extraordinary manifestations which would show us the rage of the devil. Because, without a doubt, the demons hate to be driven out of a place or to be bound with the power of Christ.”

The Spanish exorcist said that “it would be very desirable that when there’s an annual meeting of exorcists in a country, a ritual such as this exorcismo magno that took place in Mexico be performed.”

He also emphasized that a bishop “can authorize its occurrence once a year with his priests in the cathedral.”

“The bishop is the shepherd and he can use the power he has received to drive away the invisible wolves from the sheep, since Satan is like a roaring lion prowling around looking for someone to devour, and the shepherds can drive away the predator from the victim,” he concluded.