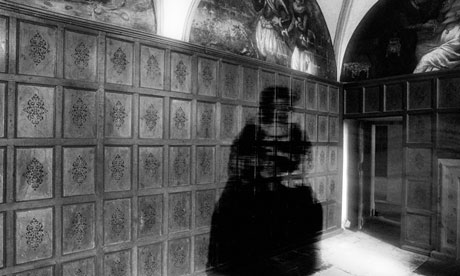 What do we fear when we fear ghosts? Certainly, they evoke the possibility of elemental entities hidden in the world, at least mischievous and even malevolent.

Chillingly, the “Enfield poltergeist” remarked to an interrogator, “I like annoying you.” There is the terror too of the touch of a ghost, the paradoxical physical presence of the disembodied. Or sometimes, in the most ghastly tales, the horror that the ghost may drag us off to whatever alternative space they so drearily inhabit; that we might become like them. Yet, ultimately, the greatest fear must be that, due to some madness or mistake in perception, some hunger or lack, the ghost that dogs us comes from within.

In a 19th-century treatise, the Scottish physician Robert MacNish unravelled the “philosophy of sleep”. He describes a woman trapped in a stultifying marriage, who haunted herself. Beckoning from above, or glimpsed in further rooms, her own apparition, a kind of mirror, flitted and passed. Having lost herself in the process of living, she had doubled up as a kind of ghost, a split figure answering mysteriously to some otherwise unexpressed inner need.

On the evidence of this highly enjoyable (and disturbing) work, Roger Clarke proves impervious to such wimpy frights. Where others naturally flee ghosts, he pursues them. There turns out to be so many British ghosts that it starts to seem odd we all haven’t seen one. Yet sightings remain rare – and for all his assiduous pursuit, Clarke has never himself caught a glimpse. Bernard Shaw remarked to the more credulous Henry James: “No man who doesn’t believe in a ghost ever sees one.” I wonder if that is the case, and side more with the marquise du Deffand, who declared: “Do I believe in ghosts? No, but I am afraid of them.”

Ghosts certainly exist in the sense that people report experiences of them – but what, this book sets out to ask, are they? What do we talk about when we talk about ghosts?

I’ve never seen a ghost but I have, I sometimes suppose, heard one. Once, about 25 years ago, in a small hotel in Cork, I came back from an evening in town with my girlfriend. I had, I admit, already once been spooked, believing on the walk home that I had seen a figure peering down from a darkened upstairs window. On closer inspection, it turned out to be a coat hanging from a window frame. I had, as a sop to the sceptics, also drunk two or three beers. I was, I maintain, far from drunk.

Our hotel room had no lavatory, so I set off down the long, well-lit, carpeted corridor to the bathroom. It was perhaps around 40ft from our bedroom door to the far end. Halfway down, someone whispered into my ear my first name – sharply, urgently, unmistakably. I assumed my girlfriend had crept down the corridor after me, in an effort to spook me once again, and turned to her. There was, however, no one there. I sped back to my room, and would not venture out again to the bathroom all night. My girlfriend was doubting, and more courageous, but when she came back, seemed disturbed too and conceded that there was an odd feeling in the space outside. We both slept; we both had terrible nightmares; the next morning, we drove on.

That is my single ghost story. Very likely it was an auditory hallucination, a fracture in perception, an intimation of nothing but a brainwave. And yet, who knows? It has had no consequences; it came from nowhere, and led to nothing.

What does one do with the experience of encountering a ghost? It’s somehow an event extraneous to a life, odd and somewhat embarrassing, impossible to assimilate into the process of experience. The experience is private, perhaps merely individual; to share it is to invite scepticism. The ghost story is a form that depends on reticence, on what is not clearly seen, on what is not fully expressed. As stories, they have no clear place to end. The ghost appears, and appears again. Dark phenomena disturb us; they peak, or they subside. In early modern times, the ghost usually needed something – an inheritance delivered, a funeral rite observed. But the modern ghost seems free of such desires, unless it is the desire to annoy us. The ghost is truly that which resists categorisation, that which cannot be assimilated or understood. They have their own genre – the ghost story – but what in such stories the ghost definitively is, or wants, remains open and undetermined.

Faced with the open-endedness of such tales, Clarke nonetheless classifies his ghosts, from the returned dead to poltergeists, from the beguilingly beautiful time-slip stories to confrontations with phantasms of the living. His “ghosts” are spirits, or they are the residue of powerful experiences imprinted in space, or manifestations of pubertal rebellion; they are slippages in consciousness; they are, most recently, expressions of their own emotional disturbance. They are produced by failure to honour the wishes of the dead; they are produced (in the brain) by a low hum.

His approach is partly chronological, but also thematic, or rather taxonomic, dividing up his ghosts according to types. For those who might see the phenomenon of the ghost as embedded in shifting social concerns, this method is sometimes alien. However, he remains alert to the determining impact of the cultural (he writes especially interestingly on the London crowds that pursued the spectacle of a ghost in the Victorian era and on the gender politics of the séance). More vitally, his method is entirely apt for what his title already tells us is “a natural history” of the supernatural. He is a man looking for family resemblances in ghost stories across time and place. Yet the historical changes he presents are themselves suggestive with implications. It’s curious and telling, for instance, that in the early modern past the ghost was someone familiar to you, a friend or family member, while more recently, as society as urbanised and atomised, the ghost tends to be a random stranger, the unknown fellow tenant. It’s equally interesting and apt that, statistically speaking, the French don’t see ghosts.

Clarke appears to have been an infant prodigy when it comes to an interest in the supernatural, the William Hague of the ghost-hunters. I am in awe of his intrepidity, yet feel that the healthiest response to such occult phenomena is simply to leave them well alone. (The spectre of the morbid unwholesomeness of a preoccupation with “the night-side of nature” is there in the sudden insanity of Catherine Crowe, the mid-Victorian expert on spooks.) But I also understand his fascination. For all the technological apparatus of the modern ghost-hunter, the lure of the ghostly is a fevered, romantic desire. It belongs with Percy Bysshe Shelley trying to summon up spirits, a home counties adolescent Faust desperately “pursuing hopes of high talk with the departed dead” … the allure of the past in such stories, the yearning for something beyond.

Moreover, behind this fey longing, this wish to sup with horrors, there is – for all the fear of an actual ghost – something snug and domestic about them. This homeliness of the ghost story appears in its relation to Christmas, an intimation of darkness at the darkest time of year that entwines with festivity, rebirth and childhood memories – of the secure past and of familiar infant terrors. Clarke’s book conveys the cosy plenitude of British eccentricity that lies close to the local ghost story. True or not, his tales are great, and he tells them effectively and engagingly. But such stories cannot help but raise the question: are true?

How do you measure a spirit, or dissect a phantom? For many, ghosts are beyond the frontier of what science can interest itself in, one boundary for the discipline. For others, ghosts, being a phenomenon like any other, are equally open to objective study. Yet most interesting of all, the technologies and machines that define the modern world and would investigate the spectral themselves have seemed prone to being haunted.

The process, perhaps, began with the gloomy railways of Charles Dickens’s “The Signalman” or Arnold Ridley’s “The Ghost Train”. But soon it spread to demon-driven cars, to mezzotints, to haunted motorways, ghostly presences in lifts, or confined to a cursed submarine. Most intriguingly, the instruments that ghost hunters themselves would use have seemed spooked: the photograph that freezes a vanishing moment catching the recurring vanishing of a ghost; the tape-recorder left on in an empty room that picks up bodiless voices; the numerous tales of eerie messages on mobile phones or ghostly disturbances within computers. Like our photos, our recordings, our texts and our tweets, the ghost is a trace, linked to technology, detected within it, and somehow inhabiting it. When the familiarities of life are themselves revealed to be haunted and strange – when there are slight deviations from the customs that conceal our relation to death – we are closest to the anxious heart of the ghost story.