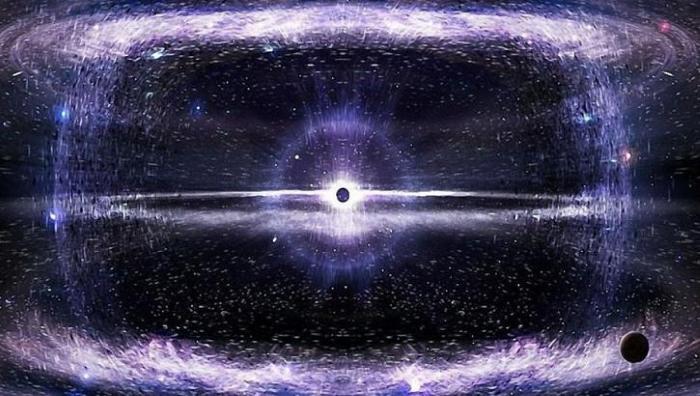 An article devoted to the search for dark matter has been published in the scientific journal Nature. To better understand what it is, astronomers have created a detailed computer model of the “web of the universe”, which includes various clusters of this mysterious substance.

“Our calculations show that small clusters of dark matter should be very common in the Universe. But by themselves they will remain completely invisible to our telescopes, “admitted one of the authors of the work, professor at the Max Planck Astrophysical Institute (Germany) Simon White .

According to the modern concepts of cosmologists, immediately after the Big Bang, matter in the Universe was divided into visible and dark matter. Their distribution was uneven. Researchers call the three-dimensional model of the distribution of forms of matter “cobweb”. They hope that thanks to it it will be possible to find traces of the decay of dark matter particles. This will help to somehow study its properties.

Back in January, predictions were made that in 2020 astrophysicists will attempt to detect dark matter and dark energy, which account for about 95% of the mass of the Universe. Science still knows almost nothing about these mysterious substances.

So what do scientists know today?

These particles permeate our bodies every second

“Until we understand what dark matter is, what kind of substance it is and what kind of particles. Physicists have not yet learned how to register them, – explains a senior researcher at the State Astronomical Institute. P.K.Sternberg Moscow State University Vladimir Surdin.

It was not physicists who learned about the existence of dark matter, but astronomers. Ever since the 1930s, observing the movement of neighboring galaxies, they realized that there are not only stars there. Their gravity is much stronger than stars, planets, interstellar gas and other matter we observe could provide.

Stars are the main objects we see. But their mass is clearly not enough to explain the mass of galaxies as a whole. Stars at large distances from the center of galaxies orbit these centers rather quickly. But according to the laws of physics, this should not be so: as you move away from the center of gravity, the speed of movement of bodies should decrease, look at least at our solar system.

This means that far from the center of galaxies there is something that provides gravity, some kind of invisible, hidden mass. And we know for sure that this cannot be a substance that is so familiar to us, with its protons, electrons, neutrons. These are particles of a new type. They surround us and permeate our bodies every second, but we do not feel them. And physicists cannot yet create devices that would be able to register them.

Scientists judge about the existence of dark matter on other grounds. For example, on the decays of star clusters, which should not have occurred if there was no interaction with some substance invisible to us. And also by the effect of a gravitational lens: clusters of galaxies bend the rays of light that come from objects located behind them. It should be so, it follows from the theory of relativity, but the calculation of the distortion shows that there is much more invisible matter than visible. More about five times.

Another mystery of science is dark energy. Physicists do not even try to solve it in laboratories, only theoretically.

In the twentieth century, astronomers recorded the movement of galaxies and found that almost all of them were moving away from us. When Edwin Hubble learned to measure the distance to galaxies, it turned out that the farther a galaxy is from us, the faster it flies away. Mathematicians have described all these patterns. It turned out that there are not so many options for the expansion of the Universe. And the mutual attraction of galaxies should stop their run-up: like a stone thrown upwards, at some point it stops and begins to fall to the ground.

In the late 1980s, new data emerged. Scientists have discovered that the movement of galaxies is not only not slowed down, but, on the contrary, accelerates. This meant that there is a force in nature that overcomes gravity at significant distances, a kind of anti-gravity. And if the first 7 billion years after the Big Bang was won by gravity, then another force began to win, which began to push the galaxies apart.

This power has been given a conventional name: dark energy. Scientists can calculate the energy itself, but they cannot indicate its carrier. Whether it is some kind of field, or a property of the vacuum, is still unclear. “

Dark energy, according to the Planck Space Observatory, accounts for 68.3% of the observed Universe, and dark matter – 26.8%. And only 4.9% are visible objects.

In this article:dark matter and dark energy