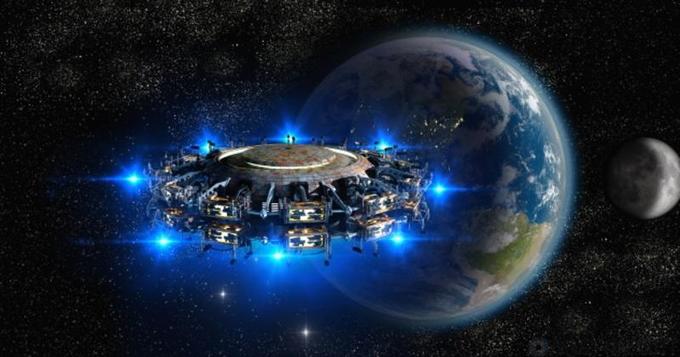 The moon is not only extremely strange in its structure, but also behaves in a miraculous way. It is four hundred times smaller than the Sun, but four hundred times closer to the Earth, therefore both the Sun and the Moon appear to be the same size in the sky, which gives us a phenomenon that we call a total eclipse. While we take it for granted, it has been called the most incredible “coincidence” in the universe.

In addition, the Moon reflects the movement of the Sun across the firmament, rising and setting at the same point on the horizon as the Sun at opposite solstices. For example, this means that the moon rises in the middle of winter in the same place as the sun in the middle of summer. There is no logical reason why the Moon imitates the Sun in this way, and it only matters for a person living on Earth.

A huge amount of research has been carried out and it has been proven beyond any doubt that the gravitational features of the moon are not just anomalous. This is the exact number necessary to ensure that the Moon does not escape from the gravity of the Earth and is not attracted to the Sun, as it should be according to the law of universal gravitation.

Given the hundreds of unnatural phenomena occurring on the lunar surface that NASA has never bothered to share with the general public, but which have nevertheless been observed for centuries by independent observers, it can be assumed that the moon is a constructed spacecraft.

Here are just a few of these observations:

– The moon is older than the Earth. According to carbon analysis, the Earth is 4.6 billion years old and the Moon is 5.3 billion.

– The dust around the Moon, which is believed to have formed as a result of weathering and destruction of rocks on the surface of the Moon, has a chemical composition that does not match the composition of the rocks on the Moon itself. This dust itself is older than the Moon by another billion years.

“Although the moon has no magnetic field, the lunar rocks are magnetized.

– There is evidence that craters on the Moon were formed by internal processes, but the Moon was never hot enough to form volcanoes.

– Surface metals are 80% titanium. There is no such amount of titanium on the entire planet Earth.

– There is seismic activity on the Moon without corresponding meteorite impacts or tectonic plate movements.

– In fact, eruptions with a reddish glow, exactly identical and repetitive, have been observed, moving the Moon closer to the Earth. Does this sound like an engine running?

The moon is not only an outwardly impossible object, but also a unique benefit for us humans. It is nothing more than an incubator for life.

If the Moon were not exactly the same size, mass and distance as it was at every stage of the Earth’s evolution, there would be no intelligent life. Scientists agree that we owe everything to the moon.

It acts as a stabilizer that holds our planet at the right angle to create the seasons and keep water liquid throughout most of the planet. Without the Moon, the Earth would be as dead and solid as Venus.

All of the above, along with a myriad of other examples, indicate that the Moon was not placed in Earth’s orbit by chance or nature, and not as a result of the application of any law of astrophysics.

A theory has been put forward that the Moon was placed there to protect the Earth from meteorites. Let’s take it for granted. By whom? God? Aliens? Let’s not focus on the part of the shield. Let’s focus on the fact “she was put there.”

So this theory assumes that someone has put the moon where it is, forcing the discussion to focus on the goal. Based on certain facts in different time frames, theories have been put forward that support the concept that our entire planet was created as a kind of prison.

According to one theory, it is a prison for watching our species.

According to another theory, the Earth is a spiritual prison. A prison for our immortal souls.

Let’s look at this with an open mind, because it is only natural that when a theory is put forward that supports something different from what was taught in school, most people reject it without even looking at the evidence.

1. The Earth is an unstable planet by its nature.

It cannot support the habitability and long-term existence of civilizations. What facts support this statement?

Constant earthquakes, volcanic eruptions and other “natural phenomena”, which over and over again destroy any civilization ahead of its time (Minoan civilization, Atlantis, Pompeii, Damgan (Iran), Antioch, plague in the Eastern and Western Roman empires, etc.) ).

Is it logical that humanity is trying to build on a foundation that is capable of destroying everything built in a matter of seconds?

Could there be any other reason other than the possibility that we have no other choice, we are forced to live here and cannot leave here and go to another place with more favorable conditions.

2. Humanity is self-destructive It

is an obvious fact that people cannot stand other people. Wars, attacks, raids, murders, rapes, crimes and everything imaginable, people do in order to hurt other people. Isn’t that the same as what happens in a prison full of criminals?

People are imprisoned when small-scale crimes (individuals and small groups), but large-scale “incidents” are recorded in history as significant events such as the Crusades, world wars, revolutionary wars, civil wars, Genghis Khan, Attila Hun. And they are studied in history books and schools. Does this make sense to anyone?

3. Humanity is always driven by a “higher power”.

What’s the best way to control prisoners? Allow them to maintain their gangster structure within their closed prison community. Thieves against political, black against whites, one clan against another prison clan, etc.

Divide and conquer. 756,000 prisoners in all prisons around the world have died as a result of gang violence within prison walls. And for what? Ideology, race, mode of action, religion, personality.

Are there any similarities?

So there you go! On the one hand, you have a cosmic body called the Moon, placed in its place by unknown forces, with the exact properties required to stay there forever, and with mysterious events observed on its surface. On the other hand, you have a population that behaves exactly like inmates in a prison.

Is it wrong to assume that this cosmic body, which we call the Moon, was placed there to guard the prisoners and to completely control everything that happens on the territory of the prison?

In this article:moon, prison planet