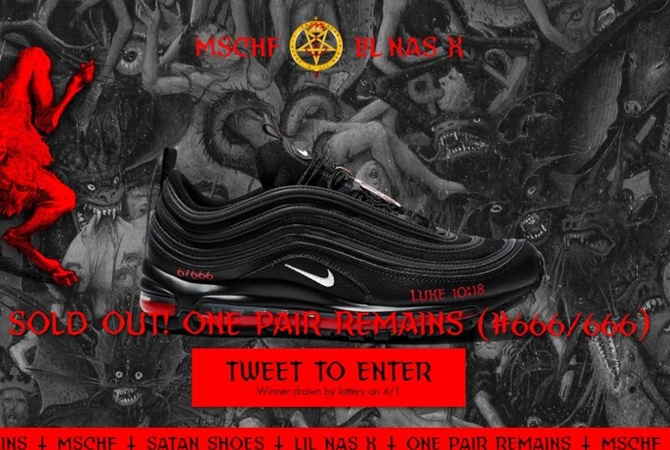 Everyone has probably already heard about the satanic sneaker scandal. Nike has released a small edition (666 copies) of exclusive shoes, stuffed with satanic symbols. The color is black and red, devilish, the price is prohibitive (1018 dollars). The sale of the pair of shoes came out closer to Easter, apparently for greater provocation and sold out in a second like hot cakes. But the main thing is that the sole was filled with human blood!

Sportswear and footwear maker Nike is now suing MSCHF for collaborating with rapper Lil Nas X to create and sell 666 pairs of human-blood sneakers. Despite this and other sinister trappings, Nike recognized the new pair of Satan Shoes as a modified version of its popular model.

Satan Shoes reported to CNN on March 29, a limited edition Satanic shoe. According to the publication, the design of the sneakers was developed by the New York company MSCHF together with the American rapper Lil Nas X. The shoes have a bronze pentagram and a red number 666 and a red liquid with a drop of human blood was added to the sole.

The blood, according to MSCHF, belonged to company employees.

“We love to sacrifice for the sake of art,” – said a brand representative.

The cost of each pair was $ 1,018, and they were all sold out on the first day. However, it is possible that most of this money will have to be given to Nike. The shoes were based on the popular Nike Air Max 97 sneakers, but the sports giant had nothing to do with the development of “satanic shoes”. The very next day, Nike reacted to the launch of the line with a lawsuit over trademark infringement.

Satan Shoes was also controversial on social media. When Lil Nas X posted a photo of the shoes on his Instagram page, followers began to vigorously criticize the idea of ​​wearing sneakers with blood on their feet.

“You are sick”, “You can keep these sneakers for yourself. I don’t care how limited they are ”,“ This is disrespect for your religious fans ”,“ I’m shocked ”,“ I would remember about God ”- these are not the most aggressive comments that fell on the rapper.

A bronze pentagram is suspended on the laces of the sneakers, and the inscription “LUKE 10:18” flaunts on the side – a reference to the line from the Gospel of Luke “I saw Satan falling from heaven like lightning.”

Nike accuses the collective of illegal use of the trademark. The company has filed a lawsuit in the Eastern District of New York.

The black and red sneakers went on sale on Monday, three days after Lil Nas X’s new song debuted on YouTube. In the video for the song, titled Montero (Call Me By Your Name), the rapper walks down a striptease pole from heaven to hell with satanic sneakers on his feet.

Each sole of these sneakers contains 60 cubic centimeters of red ink mixed with one drop of blood. Nike is demanding court action to remove the “satanic” sneakers from sale and prohibit the team from further use of the Nike logo. A few days later, A US federal court ruled to temporarily ban the sale of these shoes. Buyers who have already paid for the product will not be able to receive it, they will be refunded.

In the past, MSCHF has already distinguished itself with a similar controversial action. In October 2019, a limited edition sneaker with holy water in the sole was released. The Jesus Shoes were white, the laces were decorated with a crucifix, and the holy water from the Jordan River was poured into the bubble soles. What is the meaning of this wild action?

Most likely – to open the Overton window wider to introduce the impending new aesthetics into the culture. We made a test injection – ok, until it came in, but caused conversations and discussions, it’s already good.

But what intuitively struck peoples minds is he blood itself! Why would we believe a “creative group from Brooklyn” that they kind of rushed to fill their trendy sneakers “with their own blood drops” ?

We are glad it’s not their own blood! Who can guarantee though that if human, it is not children’s, perhaps extracted in the process of suffering and torture?

Nevertheless, with each step towards the 666 void, “lucky people” will trample on it. We really wish they are ’empty’, same as the manufacturers and buyers!

Advertisement. Scroll to continue reading.
In this article:Nike, Satan shoes