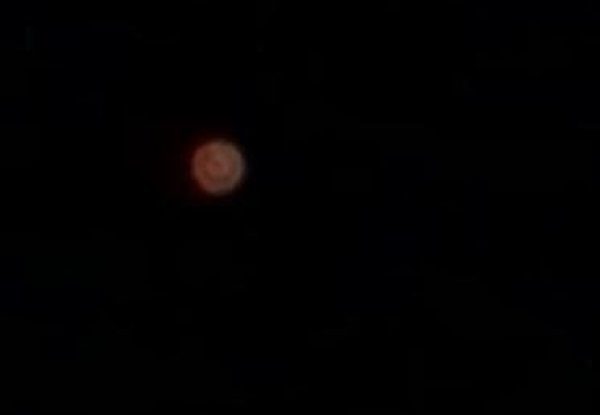 A South Carolina woman says she filmed a possible UFO off South Carolina’s Kiawah Island on Christmas Eve, and other witnesses are stepping forward on social media to report they saw the same “beautiful red sphere.”

Debra Thompson in a YouTube post with the video. “…I just wanted to know if anyone has had any experiences in the last few days…It really is quite amazing when you see one that seems to ‘splat’ out of another dimension and change into a round shape.”

Kiawah Island is just off the South Carolina coast, about 25 miles south of Charleston.

Thompson says in the video that she spotted the object about 9:30 p.m. on Christmas Eve as she stood on the deck of her home. One five-minute video shows “an extraordinarily bright and beautiful” red ball as it bounces, stops, fades and then grows brighter.

“What the hell is that?…It looks like fire in the sky,” Thompson says in the video. “That’s so weird. It just seems like it’s observing….I don’t think it’s some kid’s toy and I know it’s not an airplane.”

TV station WCBD posted Thompson’s video on Dec. 27 and reported four days later that the station had “received several emails from people who believe they may have also seen the mysterious object” in eastern South Carolina.

Even more people posted sightings on Facebook, including some who say they saw it in Ladson, North Myrtle Beach, Summerville and Edisto Beach, where someone told WCBD a room inside their home “lit up brighter than the full moon at about 6 a.m.”

Thompson says she has also heard directly from witnesses, including one who “saw something strange in the sky last night while driving on the highway.”

Some social media commenters have offered more down-to-earth ideas, guessing it was a drone, a Chinese lantern or a weather balloon.

“It was dead still that night and crystal clear,” Thompson wrote Sunday. “There wasn’t a sound outside except for some owls. Not even a breeze. This was very high in the sky and it intelligently moved.”

The web site UFO-Hunters.com says UFOs have been reported at least twice before off Kiawah Island since 2009, including a 2012 instance in which the object was described as “a very red round light.”

The Charleston Post & Courier reported on Dec. 31 that the sphere is “a phenomenon that turns up in the sky here every so often,” including multiple reports in 2015.

Advertisement. Scroll to continue reading.
In this article:fire in the sky, red ball