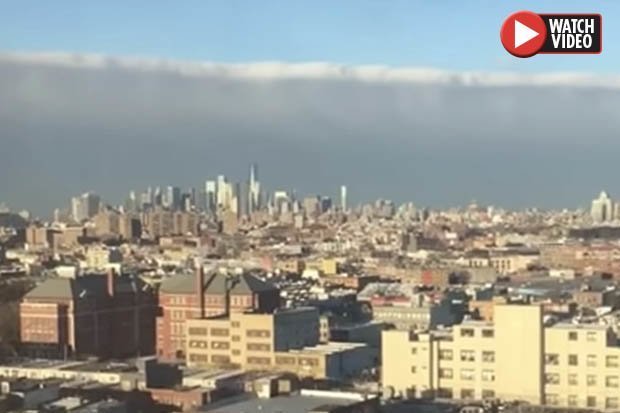 In a bizarre video, a huge straight cloud appearing over the US city.

The person behind the camera says: “This cloud formation looks scary.”

“Something’s going on with the weather.

“I think science changed the weather or something.”

Staring out the window, the baffled Yank believes the strange weather was caused by “too [much] stuff in the air”.

The alarming video has already been viewed more than 290,000 times since its upload yesterday (December 11).

One person wrote: “Isn’t it obvious now? Something is going on.”

Another commented: “I think the government is hiding something from us.”

Claims of the US government ‘controlling’ the weather originates from the HAARP theory.

The High-Frequency Active Auroral Research Programme was initiated as a research project between the US Air Force, Navy, University of Alaska Fairbanks and the Defence Advance Research Agency.

Many conspiracists believe the US government is already using the HAARP programme to control weather occurrences through the use of
chemtrailing.

They claim it is used to slow down the effects of global warming.