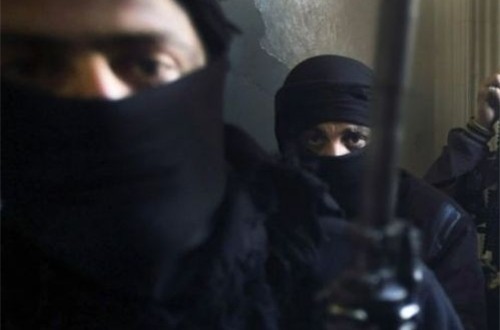 The Takfiri ISIL militant group has posted a photo of its flag pictured outside the White House, warning the US administration of their presence in American cities.

The photo shows a hand holding up an image of the ISIL flag displayed on a phone in front of the White House fence in Pennsylvania Avenue. It was first tweeted on August 9 by an account which was later deleted. “[W]e are here #America near our #target

sooooooooooooon,” read the message posted with the photo.

It came only a day after US President Barack Obama said he approved airstrikes against the ISIL group in northern Iraq. The White House later said the attacks came to guarantee the safety of the US personnel in Iraq’s semi-autonomous Kurdistan region and to protect Izadi Kurds who took refuge in Mount Sinjar after their town was captured by ISIL militants.

The recent warnings followed a separate photo posted online in June, showing a hand-written note in Arabic held up in front of Chicago’s Old Republic Building. The note said ISIL soldiers “will pass from here soon.”

Meanwhile, an unnamed ISIL militant said in a video footage filmed in Syria that the militant group will raise its flag in the White House soon.

“I say to America that the Islamic Caliphate has been established. And we will not stop. Don’t be cowards and attack us with drones. Instead send your soldiers, the ones we humiliated in Iraq. We will humiliate them everywhere…and we will raise [our] flag in the White House,” the militant said.

Advertisement. Scroll to continue reading.
In this article:ISIL, tweeter, US