The European Space Agency has shared an incredible composite image showing a 50-mile wide crater on Mars that is filled with water ice all year long.

Budding future colonists hoping for a white Christmas on Mars will be somewhat disappointed as the ESA has confirmed that sitting in the Korolev crater is, in fact, a thick block of water ice, not snow. The enormous, 82-kilometer-wide, 2-kilometer-deep “ice trap” could still be good for ice skating though.

Even better, the 2,200 cubic kilometers of water ice – same as the volume of Canada’s Great Bear Lake – could be important for the survival of future colonists, and may even enable them to return back home, as water could be split into hydrogen and oxygen for rocket fuel.

A beautiful #winter wonderland… on #Mars! This ice-filled crater was imaged by our Mars Express spacecraft. Korolev crater is 82 kilometres across and found in the northern lowlands of Mars.
More images: https://t.co/48Czjh80Qb pic.twitter.com/5KDQ1PJ0jt 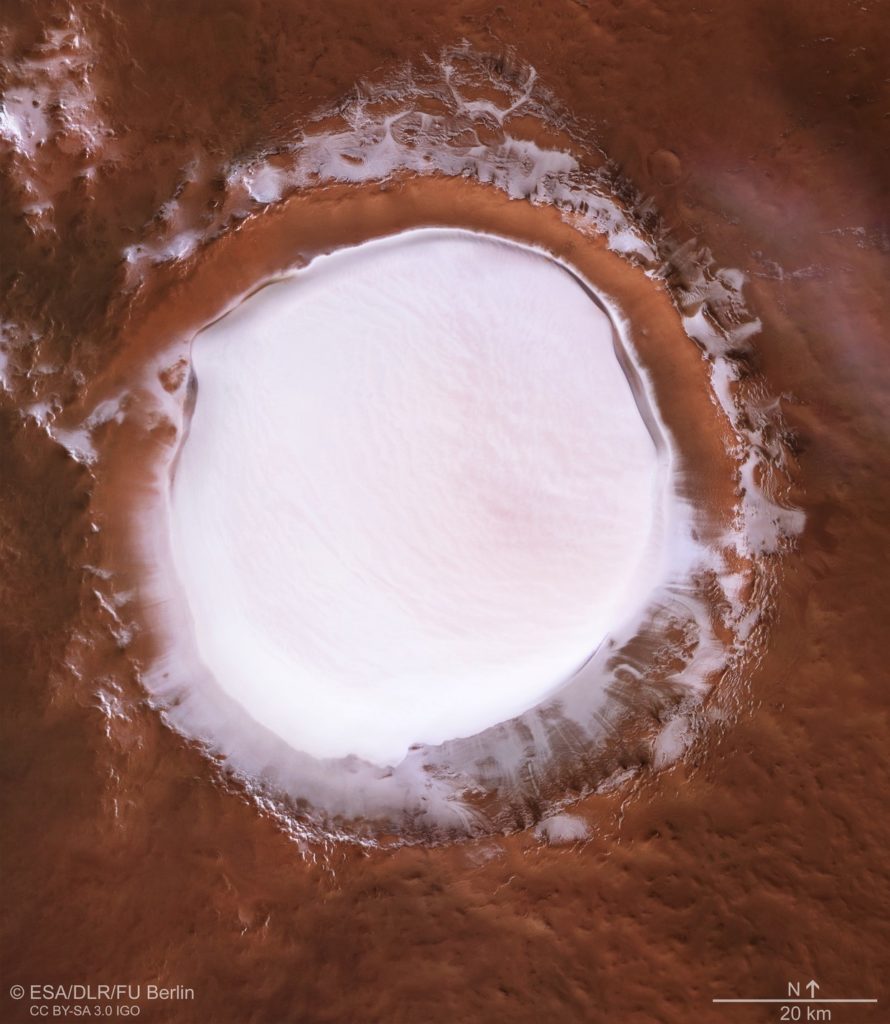 For those of you asking – yes it is water ice.

The crater is found in the northern lowlands of Mars near the planet’s north pole which is known as Olympia Undae for its wavy, dune-filled terrain. The crater’s ice is protected by the topography and by a lair of cold air that shields it from the elements. The composite image was taken by the Mars Express High Resolution Stereo Camera (HRSC) and was actually formed from five different “strips,” with each strip gathered over a different orbit as the Mars Express probe flew overhead. The 2003-launched mission this month marks the 15-year anniversary of the probe’s orbit insertion at the Red Planet.

The icy crater is named after chief rocket engineer and spacecraft designer Sergey Korolev, known as the father of Soviet space technology and the head of iconic space exploration missions including the Sputnik, Vostok, and Voskhod programs. A lesser known fact is that Korolev dreamt about a flight to Mars for decades and was actually working on a rocket that would have brought a man to the Red Planet – and who knows where this unfinished project might have ended if it wasn’t for the Soviet visionary’s untimely death in 1966.

In this article:Korolev crater, Mars water

Mars is losing its water much faster than previously thought

It turns out that Mars is losing its water much faster than previously thought. It is not clear if there will be any water...