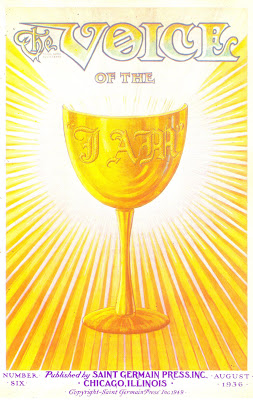 Cover of The Voice of the “I AM” magazine August 1936 edition published by Mr. and Mrs. G. W. Ballard’s Saint Germain Press, Inc.

Considering testimonials of visitations of people from ‘beyond’—or what is sometimes called ‘the ascended realm’—allows some significant correlations to be found.  These cases encompass documented cases of human interaction with so-called ‘space people.’  In 2012, blog articles  reported about ‘flying saucer contactees’ Truman Bethurum, Daniel Fry and Orfeo Angelucci.  In this post, I  am presenting four excerpts involving accounts that might lead one to recall the ‘ambrosia’ of the ancient Greeks and ‘amrita’ of Hindu scriptures.  The first is from Angelucci’s initial account of his contact  experiences from his self-published Twentieth Century Times in 1953.

The entire description of these circumstances may be read in a previous blog article.  Following this passage is an excerpt from Unveiled Mysteries (1934) by Godfré Ray King (pen name of Guy Ballard) describing what happened during a hike on Mt. Shasta.

Two effluorescent green discs, about 30 inches apart, and each about 30 inches in diameter were there, shimmering, like two bubbles perfectly suspended in air.  They appeared to be in a state of extreme agitation. Hardly two seconds had elapsed from the moment the burgundy color object disappeared, a most delightful masculine voice suggested . . . “Come out here.” Orfeo stepped out from the right side door.  Unafraid as yet, he closed it and stayed near to the front fender, unaware of his own movements.  There were only he and these two beautiful green discs.  All else was a dreamlike shadow in the background.  He knew of no world of existence, past or present. What followed is here set down in the best recollection.  It can only be gathered as to who is doing the talking or the thinking . . . “Orfeo, beloved friend—Greetings.” ” . . . Greetings.” “Do you remember us?” “Yes, . . . I mean, Yes, indeed.” “Your balloons in New Jersey — beloved friend.” (The voice was as mellow-dipped in the gold of the stars.  Who could know fear at this moment?) “Yes, I saw your plane go with them.” “They saw, but saw not.  The world sees, but sees not.  This you know.  Orfeo, you are thirsty.  Ever so thirsty.  A bottle of drink for you.” On the fender of the car Orfeo “took up” a bottle, drinking the most satisfying “nectar” he had ever tasted, and thereby all symptoms and thirst vanished at once. 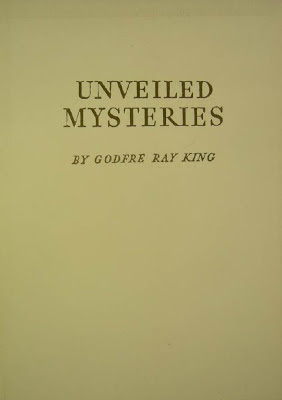 The morning in question, I started out at daybreak deciding to follow where fancy led, and in a vague sort of way, asked God to direct my path.  By noon, I had climbed high up on the side of the mountain where the view to the south was beautiful as a dream. As the day advanced, it grew very warm and I stopped frequently to rest and enjoy to the full the remarkable stretch of country around the McCloud River, Valley, and town.  It came time for lunch, and I sought a mountain spring for clear, cold water.  Cup in hand, I bent down to fill it when an electrical current passed through my body from head to foot. I looked around, and directly behind me stood a young man who, at first glance, seemed to be someone on a hike like myself.  I looked more closely, and realized immediately that he was no ordinary person.  As this thought passed through my mind, he smiled and addressed me saying: “My Brother, if you will hand me your cup, I will give you a much more refreshing drink than spring water.”  I obeyed, and instantly the cup was filled with a creamy liquid.  Handing it back to me, he said: “Drink it.” I did so and must have looked my astonishment.  While the taste was delicious, the electrical vivifying effect in my mind and body made me gasp with surprise.  I did not see him put anything into the cup, and I wondered what was happening. “That which you drank,” he explained, “comes directly from the Universal Supply, pure and vivifying as Life Itself, in fact it is Life—Omnipresent Life—for it exists everywhere about us. It is subject to our conscious control and direction, willingly obedient, when we Love enough, because all the Universe obeys the behest of Love.  Whatsoever I desire manifests itself, when I command in Love.  I held out the cup, and that which I desired for you appeared.”

The preceding excerpt is the first part of the description of the narrator’s first encounter with ascended master Saint Germain, who is quoted:

“We—in the Ascended State—can control the atomic structure of our world—as a potter controls his clay. Every electron and atom in the universe is obedient to our desire and command because of the God-Power by which we control it and of which we have earned the right to be the Directors.
“Mankind in the unascended state marvels at these things but I tell you, it is no more effort for us to change the appearance and activity of our bodies than it is for the ordinary human being to change his clothes.”

Orfeo Angelucci wrote about a ‘nectar’ produced from pellets and water that resulted with a liquid that could seemingly elevate the drinker “into the next octave of consciousness” in Son of the Sun (1959).  The following excerpt is from the first chapter, wherein Angelucci described having first encountered in a Twentynine Palms cafe ‘Adam,’ a strikingly handsome young man who “had just come through an experience of learning and romance that was not one which mortals of earth usually know . . . In the course of three evenings he narrated his fantastic story to me.”

From Son of the Sun

“Would you like a bottle of beer, Orfeo?” I looked at the pitcher of water.  His own glass contained a sparkling liquid the color of pale ginger ale, fizzing and bubbling continuously, though he had already drunk half of it.  The lively bubbles arose from the remains of a tiny tablet at the bottom of the glass.  My answer to his offer was a hurried, “No, Adam.  No beer from me.  I will take the water,” and I poured some from the pitcher into my glass.
Adam smiled even more broadly as his hand went into his coat pocket.  He brought out an oyster-white pellet and held it before me as he remarked:
“O.K., Orfeo.  Then how about a very rare champagne?”
Returning his reassuring smile with my own, I took the pellet and dropped it into my glass.  Immediately the water bubbled, turning slowly into the clear, pale amber contained in his own glass.  I lifted the glass a few inches from the table, looking into it with a feeling that this might be the drink I dared not hope for.  The exhilarating aroma rising from it could not be mistaken.  I had tasted and smelled the same liquid before.  I put my lips to the glass and merely let the liquid touch my lips.  That was enough.
“Adam — Adam, I can’t believe it!  Please don’t fool me.”  My sudden excitement had taken me from earth number one to earth number two.  I could feel my whole being swirling into another domain from the mere recognition of the nectar.  I could not control my spiral ascent, nor did I want to.  Adam’s eyes had continued smiling into my own.
“Yes, Orfeo,” he assured me.  “It is nectar.  A mild, diluted form, but the real nectar, just the same.”
I wanted to take a few sips, but just then the waitress brought servings of soup and salad to me.  Up to this moment, in spite of my sudden exhilaration, everything had appeared normal to me.  But I knew that very soon everything would appear differently.  So I tried to evaluate the objects about me as they truly were so I would not lose my sense of orientation when the environment took on an enhanced aspect.
Ah, yes.  No wonder Adam had expected me.  No wonder he seemed so alive and alert.  To him all the surroundings were of a different pace and appearance.  Before I opened the door, he had already come under the pleasant spell of the nectar.
What was more important, he was in the protective care of others somewhere, perhaps nearby, perhaps far off — unseen, and not of earth, nor of our solar system.  Soon I, too, would be engulfed with him.
I thrilled from head to foot as I took the glass, lifted it to my lips, and swallowed twice from it.  At that instant I entered, with Adam, into a more exalted state and everything around me took on a different semblance.  No longer was I in Tiny’s cafe in Twentynine Palms.  It had been transformed into a cozy retreat on some radiant star system.  Though everything remained in its same position, added beauty and meaning were given to the things and people present there.

Angelucci wrote that Adam’s next spoken words were: “In the final analysis, Orfeo, there is only one virtue; the love of pure learning.  And all else is procrastination and dissipation in the eyes of the One who awaits our evolutionary awakenings.” 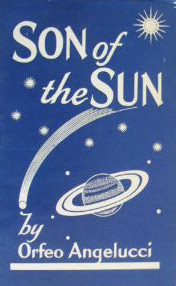 In a recorded lecture from the same year that this book was published, Angelucci commented, “I wrote a second book Son of the Sun as told to me by a physician, Adam.  He had the same experience [but] much better than mine.  He was able to tell me where they came from.  So I wrote it.”  This book can now be read online, as can be Angelucci’s The Secret of the Saucers (1955) and Ballard’s Unveiled Mysteries.  Another passage from Unveiled Mysteries features an otherworldly liquid involved in a consciousness expanding encounter.  The following excerpt is from Chapter VIII.  An interlude is presented that occurred as the narrator was looking forward to an anticipated reunion with Saint Germain in seven days.

More information about Guy Ballard and Unveiled Mysteries may be read in the concluding portion of this 2012 blog article.
These excerpts bring to mind a lecture I attended in Hollywood on May 20, 2006.  Ramtha was ‘channeled’ by (spoke through) the entranced JZ Knight.  In the lecture that was later given the title “From Suppression to Love and the Power to Change” for a CD recording, Ramtha’s first words were: “Greetings and salutations, you beauteous entities, indeed welcome to this esteemed audience.”  He repeated the phrase several times with slight variations in the choice of words and then said, “Indeed I am honored to have you here.  Let us have a drink to life.  We change the water that it become the living proclamation to which we say.  And then we drink it into the body and the body is given life truly.”

In this article:space people, the ascended realm, Unveiled Mysteries