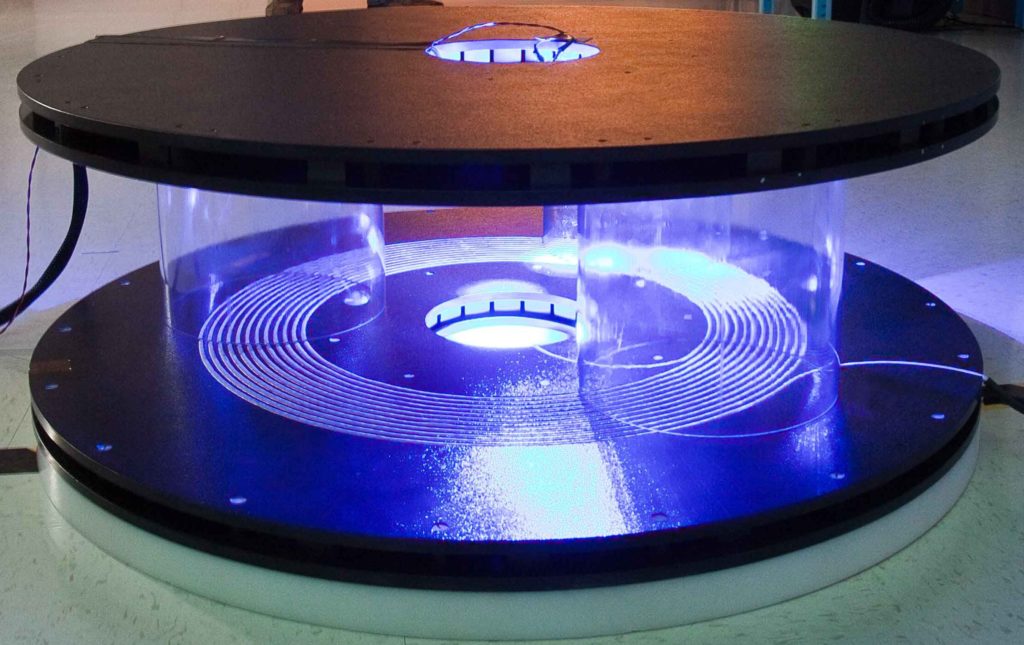 Utah State University presented a first-of-its-kind electric bus that is charged through wireless charging technology in a demonstration Nov. 15. 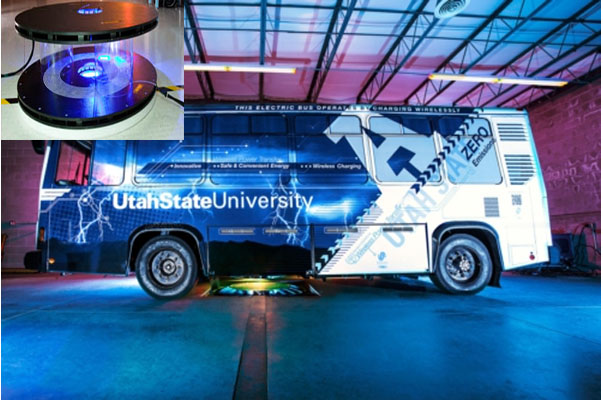 USU’s Wireless Power Transfer team, in cooperation with the Utah Science Technology and Research initiative’s Advanced Transportation Institute at USU, has designed a more efficient way to meet the nation’s transportation needs. By carefully applying a mix of modern advances in engineering and Nikola Tesla’s principles of induction, USU engineer Hunter Wu and his team have solved one of today’s vexing problems in WPT. Their research has led to the development of a robust prototype, which has been fitted to the Aggie Bus. The prototype transfers power over an air gap where no physical contact is required. Wireless power transfer technology delivers a multitude of benefits to consumers that include greater reliability due to no moving parts or cords, added convenience through the elimination of plug-in charging, the assurance of safety by removing the risk of electrocution and aesthetically pleasing devices as a result of no visible wiring.

USU’s Aggie Bus has achieved several significant milestones. It is the first bus developed and designed by a North American organization that is charged with wireless power transfer technology and is the world’s first electric bus with WPT technology combining the three following performance metrics: A power level up to 25 kilowatts, greater than 90 percent efficiency from the power grid to the battery and a maximum misalignment of up to six inches.

“The unveiling of the Aggie Bus today is a historic achievement and a great leap forward in the science and engineering related to electric vehicles,” said Robert T. Behunin, USU vice president of commercialization and regional development. “As a result of the work done by Utah State engineers, scientists and partners, EV owners and operators will now be able to simply drive over a pad in the ground to recharge their batteries, the benefits of which reach far beyond convenience.”

WAVE Inc., a Utah State University spin-out company, worked in cooperation with the USTAR Advanced Transportation Institute to develop the Aggie Bus. WAVE tackles the problem of heavy and expensive electric vehicle batteries through wireless power that transfers electricity between vehicles and the roadway. The Aggie Bus represents a market-ready product that will be used to retire significant technical risk as WAVE moves onto full-scale projects next year. WAVE, in partnership with the Utah Transit Authority, will launch its first commercial demonstration in mid-2013 on the University of Utah’s campus. It will feature a 40-foot transit bus on a public transit route and an increase in wireless power transfer charging from 25 kilowatts to 50 kilowatts. The project has been funded by a $2.7 million TIGGER grant from the Federal Transit Administration and the University of Utah which purchased the bus. WAVE intends to deliver a commercially ready product that operates with the same reliability as current public transit bus options, including diesel and compressed natural gas buses.

“Current battery limitations prevent an all-electric transit bus from operating all day from an overnight charge,” said Wesley Smith, CEO of WAVE. “WAVE solves that problem by charging the bus wirelessly during its daily operations when the bus stops to load and off-load passengers. This technology makes electric buses competitive with their diesel hybrid and CNG counterparts.”

Utah State University has refashioned the way in which it conducts its technology transfer operation. The office of Commercial Enterprises, a division of Commercialization and Regional Development, provides a one-stop-shop for industry partnership and intellectual property development.