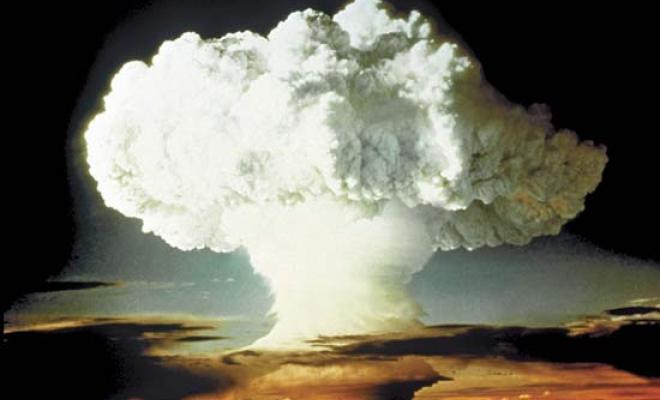 The U.S. will spend $1 trillion over the next 30 years maintaining and modernizing its nukes, according to a new report.

The United States will spend $1 trillion maintaining and modernizing its nuclear arsenal over the next thirty years, according to a new report from an independent think tank.

“Over the next thirty years, the United States plans to spend approximately $1 trillion maintaining the current arsenal, buying replacement systems, and upgrading existing nuclear bombs and warheads,” according to the report, Trillion Dollar Nuclear Triad:  US Strategic Modernization over the Next 30 Years, which was released by the James Martin Center for Nonproliferation Studies (CNS) on Tuesday.

These costs will not be spread out evenly over the long time period. Instead, the authors of the report — Jon B. Wolfsthal, Jeffrey Lewis and Marc Quint — conclude that “Procurement of replacement platforms and associated warheads will peak during a four to six year window, sometime after 2020.” During this peak period, the United States will have to devote as much as three percent of its annual defense budgets to its nuclear arsenal. This is similar to the percentage of the defense budget that was devoted to modernizing the U.S. nuclear arsenal during Ronald Reagan in the 1980s, according to the report.

The CNS figures are roughly consistent with those of the Congressional Budget Office, which projected last month that the U.S. will spend $355 billion over the next decade on its nuclear arsenal.

The new report is based on a year-long study CNS undertook to estimate the cost of maintaining and modernizing the U.S. nuclear arsenal. As the author’s note in the report, “The United States government does not know with any accuracy how much it spends annually on its nuclear deterrent, or how much it will cost to replace the current [nuclear] triad.” Because of this, the authors contend, U.S. lawmakers and policymakers have been able to avoid a robust debate on the strategic utility of maintaining and modernizing the nuclear triad amid an increasingly tight fiscal climate.

According to the newly published figures of the Federation of Atomic Scientists (FAS), the U.S. currently has a stockpile of 4,650 nuclear warheads, 2,130 of which are operational. In addition to the 4,650 warheads, Washington has 2,700 retired nuclear warheads that have yet to be dismantled.

The CNS report estimates that in recent years the nuclear triad has cost around $8 billion annually, which works out to be about $240 billion over 30 years.

The U.S. intends to modernize all three legs of its nuclear triad in the coming decades. This in many cases is likely to impose a taxing burden on the Air Force and Navy, the two services responsible for the three legs of the triad.

As I wrote last May, “The immense cost of the Ohio-class replacement program to build the United States’ next generation ballistic missile submarines (SSBNs) threatens to jeopardize the rest of the fleet.”

The U.S. Navy currently envisions purchasing 12 new SSBNs to replace the currently 14 Ohio-class SSBNs that will be gradually retired. Each of the new 12 is projected to cost between $4-6 billion, leaving little additional money in the Navy’s shipbuilding budget.

Some in the arms control community also claim modernizing the nuclear triad is unnecessary strategically. Joseph Cirincione, president of the Ploughshares Fund, writes in his recent book:

“The U.S. nuclear arsenal is still configured to counter the Cold War threat of a massive Russian nuclear attack…. Reconfiguring the nuclear force to address the actual twenty-first-century threat environment could reduce force numbers dramatically over the next decade without sacrificing vital military missions.”