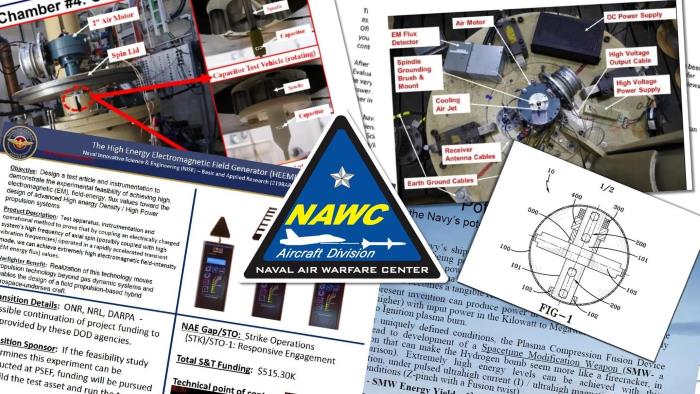 The Drive reviewed a wide range of documents that contained data on experiments carried out by the aviation department of the United States Naval Aviation Center (NAWCAD),  one of the main centers for research and development. The experiments were carried out to test the basic concepts and technologies described in the so-called “UFO Patents”.

Unusual ideas and inventions were patented for the American Navy by engineer Salvatore Cesar Pais. He advocated a new concept of theoretical physics that would be made possible by “the controlled transformation of electrically charged matter (from a solid) into plasma through accelerated rotation or accelerated vibration under conditions of fast but smooth acceleration-deceleration-acceleration transients.”

The engineer believed that his ideas would help create incredibly powerful electromagnetic energy fields, which would be a real revolution in energy and quantum communications, energy production and even weapons. It seems that the latter interested the military and became the starting point for studying the “Pais effect”.

The source says that Pais’s theories began to be investigated in 2017. In  the period between 2017 and 2019 on the project has been allocated not less than 466 810 dollars. A team of at least 10 technicians and engineers was assigned to design and test the devices. In 2018 and 2019, over 1600 hours of work were devoted to the project. These included design, equipment procurement, testing and reporting.

Many documents also indicate that the Office of Naval Research (ONR), the Naval Research Laboratory (NRL) and other development centers, including the Defense Advanced Research Projects Agency of the US Department of Defense (DARPA) , can continue the study  of the Pais effect . It is currently unknown whether the study of Pais’s theories and developments has been transferred to other agencies, the source specifies.