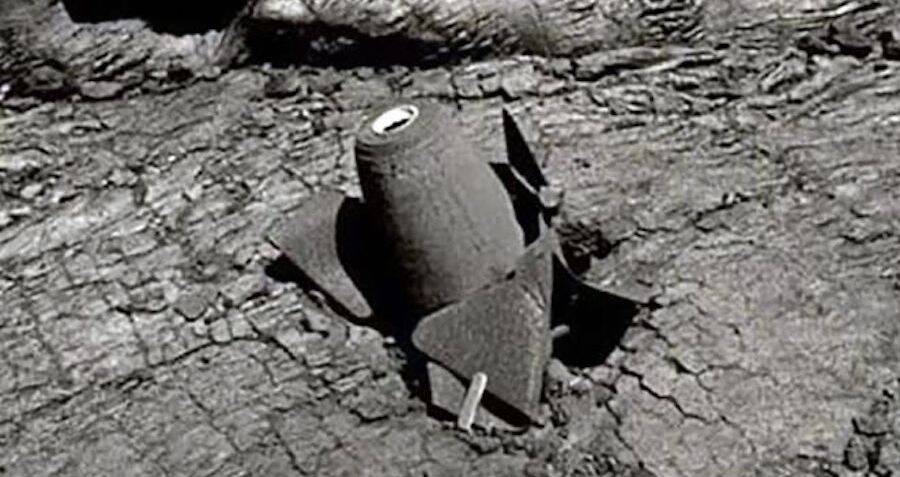 October 29, 2021 marks 40 days since the beginning of the eruption of Cumbre Vieja and as yet we have not witnessed a tsunami. La Palma does not split into pieces, does not fall into the ocean and does not raise a mega-wave to wash away parts of our civilization.

Well, we decided to speed up the process. One wise guy announced a plan to bombard the mouth of the volcano with bombs from military planes, and thereby “solve all the problems.” An elegant idea?

“The head of the Spanish island of Homer of the Autonomous Community of the Canary Islands, Casimiro Curbelo, proposed to drop bombs on the erupting volcano of the island of Palma in order to give the right direction to the flows of lava, in a commentary to the newspaper El Mundo.“

Isn’t there a plane that flies? Fly in and throw a bomb, boom! ” – Courbelo suggested.

“Maybe what I’m saying is stupidity. But it seems to me that from a technological point of view, we should try,” Courbelo said, offering to test in practice the option he proposed to bomb the volcano. Note that on the island of Palma in the Canary Islands, hundreds of earthquakes with a magnitude of no more than 4.9 have recently been recorded.”

In 1935 the Mauna Loa volcano on Hawaii erupted and threatened the local town of Hilo, prompting volcanologists to request the US Army Air Service, in a mission handed to George S. Patton to oversee, to bomb the lava flows in an attempt to save the town and its water supply, which was under threat from a lava flow advancing at a rate of a mile a day.

Speaking of earthquakes, the ones in Cumbre Vieja are of artificial origin, as they are laid out in a square-nesting way, which contradicts all known physical laws.

Just go to the seismic activity site and zoom to the area: 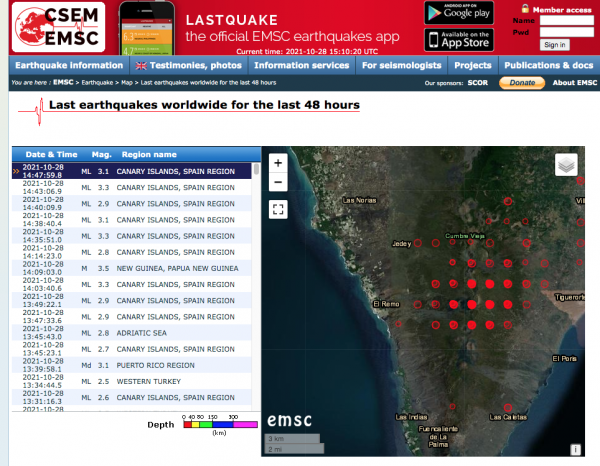 Tremors are marked in red. How neatly nature works, smoothly and in a line! Nice to the eye. Not like in other places on earth, where it also shakes in clusters, and everything is covered in a heap.

A US video blogger was the first to panic. A fourteen-minute video of psychosis escalation could easily fit into 2:

Unfortunately (or fortunately) such a neat grid may have an explanation – it’s either the location of the sensors installed around the volcano, or a whole chain of valves along the ridge separating the landslide area. But who knows?

More information from other satellites. The information is from October 16, and it very much looks like it is correct:

As you can see, the maximum surface rise is located much south of the first vent. This means that the lava went along the old channels, gradually passing the way from the eruptions of past centuries and came out much further north. But the main lake is exactly where the satellite image is marked in red.

Somehow, it so happened that on the edge of this lake, NASA sees some kind of thermal anomalies. We don’t even know what it is there.

Some users spied another news during a live broadcast: the cameraman who was filming the volcano suddenly felt the earth tremble and began to run away from the set unrealistically quickly – despite the night and piles of ash, at the risk of his life:

In other words, the dude was scared by something not childish, although the officials say that everything is Ok. it doesn’t look like Ok. Especially in light of messages of the following kind:

Orlando is Florida, and Florida is the US landmass that will be hit hardest by an Atlantic tsunami. It must have coincided that with the aggravation of the situation on La Palma in Florida, some kind of military activity began.

Another interesting piece of news came from users of the worldview.earthdata.nasa.gov resource, which shows almost real-time temperature anomalies on the planet, visible by infrared satellites.

It is possible that all this is somehow connected, that the new ventilation holes in the NASA images are not a program error, but real classified information and the Pentagon is starting something like the evacuation of some of the most valuable assets from Florida. At the moment, it is definitely too early to talk about this, and everything will be shown in the next 24-48 hours.

If, nevertheless, shaking occurs from the use of tectonic weapons in order to cause a catastrophe that will help the Great Reboot, then the chances of success for such an operation are much less than if the events on La Palma are purely natural and are in the hands of God, for man believes, and God disposes, and no matter how much the unfortunate La Palma tree is shaken, nothing terrible will happen if it is not spelled out in the world scenario by the Higher Powers.

But bombs are cool. Maybe cruise missiles are a even a more swift approach?

Proof of the elite’s plans to destroy the world through the tsunami on La Palma. Video game, 2009:

We will show you what will cause the total destruction of our world: This is La Palma, one of the Canary Islands, a paradise for tourists, sun lovers. The island suits us due to the existence of the Cumbre Vieja volcano on it. The broken western slope of the volcano is covered with cracks and cracks where water has accumulated.

Now for the fun part. By carefully placing several bombs in precisely calculated places, we use thermonuclear explosions to heat the water so that it instantly evaporates. If you remember your physics lessons well, you know that such a rapid evaporation of huge volumes of water can create enough pressure to crush the fragile flank of the volcano, and it will collapse into the ocean.

Do you know what will happen next? A 200 meters high tsunami will sweep across the Atlantic at the speed of an airplane and hit the east coast of the United States! New York will disappear in an apocalyptic deluge, taking with it the self-proclaimed rulers of the world who are now squabbling in their blind incompetence at UN headquarters.

As a result, the power vacuum will be filled by our followers, some of whom have waited decades to find themselves in key positions. They will take control of everything and lead humanity to the New Golden Age.

In this article:Cumbre vieja, la palma