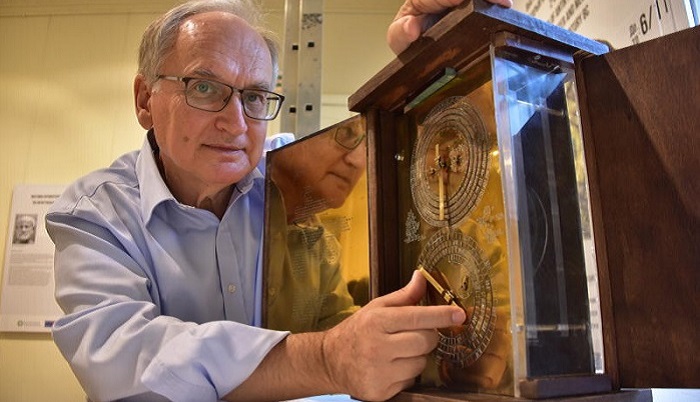 Some people still come as no surprise when they learn about technological advances in antiquity. This is related to existing stereotypes.

For example, they say that in ancient times there was no electricity, such as light bulbs. However, the facts suggest otherwise, and scientists acknowledge them. Unfortunately, sometimes it is not possible to replicate the unusual inventions of ancient masters, even today…

In the early morning hours of November 5, 2005, the luxury Siborn Spirit cruise liner was attacked by Somali pirates. The liner manages to repel the attack using a relatively new and effective technology – an acoustic gun.

When aimed at the target, the sound gun emits a piercing sound that can exceed 150 decibels. This is enough to cause nausea or even hurt a person’s vision and hearing. Currently, acoustic weapons are used by law enforcement. It is considered one of the advances in scientific and technological progress, but similar weapons were used in ancient times…

The ruins of the city Jericho are located 27 kilometers from Jerusalem. There, archaeologists discover the ruins of a settlement dating from the 8th millennium BC. According to the Bible, the city of Jericho is based on the place where the Lord spoke with Joshua, the descendant of Moses.

According to modern historians and scholars, the city is devastated by a powerful earthquake. However, the drafters of the Old Testament think differently. The text of the Old Testament contains a detailed description of the chauffeur, an ancient wind instrument that destroyed the city wall.

Today, batteries can be purchased at any store. But let us introduce you to an unusual and incredible invention of ancient scientists – a battery that is 2,000 years old. In the collection of the Museum of Iraq (Iraqi Museum) in Baghdad, there is a small clay pot, which, despite its ordinary appearance, is called “archeological science”the most incredible find“. Because, although it is about two thousand years old, the kettle is obviously a battery case.

This find, known as the Baghdad Battery, dates from 248 to 226 BC. The device consists of a clay vessel in which an asphalt-reinforced copper cylinder with an oxidized iron rod is placed inside. The contents of the henna model were studied during two experiments conducted independently of each other in the United States.

When the top of the copper tube is filled with acetic acid (vinegar or wine) as an electrolyte (sulfuric or citric acid can also be used), the model generates a half-volt current for 18 days.

It is believed that this ancient battery can be used for galvanizing gold. If this is true, how is it that technology is lost and the battery disappears from the face of the earth for 1 800 years?

Another example of the incredible inventions of antiquity. In 1900, divers discovered near the Greek island of Antikythera, located northwest of Crete, a puzzling artifact.

Divers erected many marble and bronze statues on the surface from the wreckage of a sunken ship. Among the finds was a piece of rusty bronze, which featured parts of some mechanism consisting of different gears. According to the surviving inscription, the device was created in 80 BC.

Many experts first thought it was astrolabe, a tool for astronomical calculations. Subsequently, an X-ray examination of the mechanism revealed interesting details: the dental system was too complex.

In 1956, about two dozen aluminum jewels were discovered in China during excavations at the burial site of a military leader killed in 297 BCE. The catch is that aluminum is a refractory metal. The technology for its processing appeared only in 1826, and it was not until 1889 that its industrial production began.

Another example related to the use of metals in ancient times. It was not until 1932 that the crystallographer William Bragg, well known to physicists, revealed the secret of Chinese “magic” mirrors made of bronze, dating back to 1,500 years.

In addition to the usual reflection, when illuminated, they project a model or hieroglyph on the back of the wall. It turns out that on the reflecting side of the mirror, the pattern visible from the back is cleverly repeated, but invisible without a magnifying glass. The curvature of the mirror increases the reflection of the pattern. To produce such a miracle, it is necessary to have a magnifying glass with a very powerful magnification.

The evidence for the presence of ancient inventions is indirect, but at the same time very convincing. The existence of a magnifying glass more than 1,500 years ago is exactly the case.

For example, an inscription on a 10th-century Arab coin was found: “The work of al-Hassan, the son of Mohammed, the master who cut the coin-cutting matrix“. The text can only be read with a magnifying glass, four times magnified. It turns out that the contours existed thousands of years ago and were used to encrypt additional information.

How did the ancient Egyptians light their underground rooms and tombs, carved in the rocks in the Valley of the Kings? The corridors and crypts in the pyramids, where the walls are covered with texts? Maybe the artists used torches and candles? But then the walls and ceiling should be covered with a thick layer of soot, but they are missing.

Or were the rooms illuminated by metal mirrors? This is indeed possible. The sun in Egypt is very bright and can give light in any direction, even if it reflects strongly enough. However, this task is complicated in illuminating the meandering corridors and crypts located deep underground, such as is the case in the Valley of the Kings.

In the reflection of each subsequent mirror, the light loses its brightness, especially if the metal reflectors used in Ancient Egypt.

Or, perhaps, the ancient Egyptians knew how to get light from incandescent lamps and batteries? This is probably because there are images of strange clay mugs on the walls of the Egyptian temples, strikingly similar to the batteries of Baghdad and of… modern incandescent lamps.

But, where there is electricity, copper conductors should be sought. Separate thin copper wires were found in the tombs of the Pharaohs, in particular in the Tutankhamun pyramid in the Valley of the Kings.

As early as the 11th century, in China, engineer Lou Dao Long invented a trolley with an audible alarm. When the carriage was traveling a Chinese mile, called “Li,” a special gear triggered a hand on a wooden figure hitting a drum.

It turns out that even the water machine was invented in the 1st century AD by the famous mechanic Heron of Alexandria of Egypt. The man puts a coin in the slot, it falls at one end of the frame hidden inside the machine, the other end of the shoulder opens the faucet, after which the person receives his portion of water for ritual washing of hands before entering the temple. Meanwhile, the coin slides, falls to the bottom of the machine, and the tap itself closes.

Why are so many ancient inventions forgotten? Usually, the wars are blamed. We will not dispute this argument. But the slow dissemination of information plays a role that makes ancient society strikingly different from modern society.

It is usually written about the fact that glass windows and water pipes, known in ancient Rome, have only spread again after many centuries. One can argue: these are expensive things. But, for example, in Byzantium, the usual fork was known as early as the fourth century AD, and in most European countries it spread only in the 18th century, that is, 1 400 years later.

Another example. Tea began to be drunk in China in the eighth century. It was first imported to Russia in the seventeenth century, and became “in vogue” in the early nineteenth century.

But these items and products are not strictly kept secrets, such as the “Greek fire” or the technology of growing Chinese silkworms, and they are not lost, such as the long-lost secret of Damascus steel. And military innovation – from crossbows to pigeon mail – is spreading much faster.

In this article:ancient batteries, ancient inventions