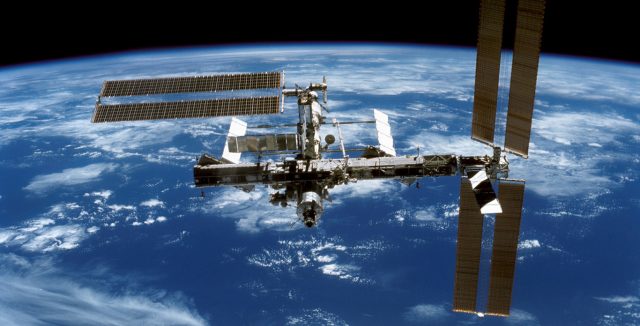 It seems like there is no end to the videos of strange lights and objects reported in clips of live feeds from the International Space Station.

All the usual sensational YouTube channels (you know the ones) are full of videos trying to make much ado about lens flares, small pieces of orbital debris, or video artifacts and glitches all in the name of The Truth is Out There. I usually barely even watch a few seconds of them before I move on. This one, though, feels somehow different. This week, a live stream from the ISS caught a mysterious, seemingly triangular object float by a SpaceX Dragon capsule as it arrived at the space station. Was this the elusive TR-3B caught on camera, or did something stranger make a Christmas cameo? The Dragon capsule was there to deliver candied yams, green bean casserole and Christmas cookies to the astronauts. Plus the usual nerd stuff, of course.

As always, it’s difficult to tell. The object in the video is blurry as all unidentified objects in videos are, so it’s ultimately unclear what was captured on the live stream. However, it’s undeniable that the video is eerie. In the footage, the SpaceX Dragon capsule floats serenely against a total black backdrop before something dark floats quickly in and out of the frame behind the craft. The object is barely discernible in the darkness, but something is clearly there. Since the object is behind the capsule, it’s impossible to judge its size, but it sure seems to be as big as if not much bigger than the Dragon capsule.

Several UFO-themed YouTube channels have published videos in which filters have been added to the raw footage, enabling the object’s unmistakably triangular shape to emerge. While several news reports and press releases claim the live stream could have captured the long-rumored TR-3B aircraft or another one of the world’s innumerable triangular UFOs, the footage isn’t anywhere near high-quality enough to make out any details on the object. Space rock? Hunk of space garbage? Telepathic manta ray creature? Black knight satellite? Could be any of the above. The triangular UFO is one of the most commonly reported types, perhaps second only to the saucer and the ambiguous light-in-the-sky.

Of course, while those theories are great fodder for the imagination, an explanation requiring less speculation is probably far more likely. With tens of thousands of known pieces of orbital debris floating around in orbit, there’s no telling what might float by the ISS cameras from time to time. In all likelihood, this footage shows nothing more than a piece of dumb space junk which happened to drift listlessly by the ISS at an opportune time. Given all of the unusual activity around the space station lately, there’s no telling what debris could be floating around up there.

Of course, when we do finally catch an alien spacecraft or other space-borne strangeness on camera, will we be able to tell it apart from a piece of dumb space junk? How do we know alien spacecraft don’t look exactly like our space junk (if they exist at all)? Don’t even get me started on camouflage. If the Millennium Falcon can cling to the side of a Star Destroyer undetected, an alien craft advanced enough to make it to Earth in the first place could definitely cloak or disguise itself.

With so many unknowns, there’s no telling what the object in the video could be – which is why we all can’t call this video proof of anything extraterrestrial or otherwise. While we’d all love it to be aliens, other explanations are far more probable.

In this article:SpaceX Dragon capsule, TR-3B