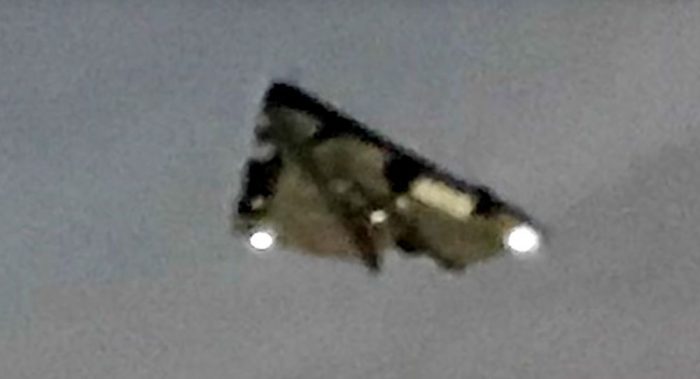 Something that was universally deemed to be an exotic triangular object made its way over Portland, Oregon, arousing vast speculation over covert USAF projects, both past and present.

There has emerged a series of images supposedly showing a shadow project government spy plane in the skies over Portland, Oregon in the US, apparently a stone’s throw from the Portland Air National Guard Base (PANG). The authenticity of the images has yet to be verified, however.

The triangular, partially lit-up object featured in the snaps couldn’t help but intrigue the vast audience of YouTube conspiracy theorists Blake and Brett Cousins of thirdphaseofmoon, who posted the pictures in a clip over the weekend, citing “multiple accounts” from a number of onlookers in the area.

In the clip, Blake noted that the sighting, more specifically the contours, bears a striking resemblance to the alleged “infamous” TR-3B Black Manta – an aircraft that is thought to have been developed for the US Air Force as part of a black project.

Many have long speculated that the supersonic stealth plane, with a recognisable triangular design, was used during the Gulf War to provide laser designation for the Lockheed F-117 Nighthawk attack aircraft.

Blake went on to suggest that the craft in the images was most certainly “military”, given the light it was throwing back.

“FINALLY! It’s About To Get Real…TR-3B Pang Base Portland”, the website founders wrote, while another user commented in the same manner:

There were, however, those who thought other options would be even more plausible:

“Judging by the pic that’s not the TR3. That’s the new Stealth AI Drone”, one astonished viewer noted, while another butted in, saying that he would rule out CGI (computer-generated imagery).

Hordes of fans applauded the footage, bringing up the military base in the vicinity: one even suggested that it could be a new stealth drone, the XQ-58A.

Another went deeper into the conspiracy theory, suggesting “they want to be seen” as “it’s part of how they control disclosure”.

“This IS NOT definitely a TR3B! It looks like an F45”, a user commented, with another chiming in with a completely different idea in mind:

“That is a Large Extra-terrestrial Craft. The 2nd clip. The entire ship is phasing in from another dimension and somehow how only exposing its lights. The ship does not reveal its true form for safety reasons (its [sic] massive, that’s an understatement), and also due to compassion for us”, the user explained.

The idea about the military testing new equipment is recurrent, though:

“This is not a UFO/this is military aircraft. They were out testing”, one suggested, with another adding: “I saw what looked like an Air Force logo near the nose of the craft”.