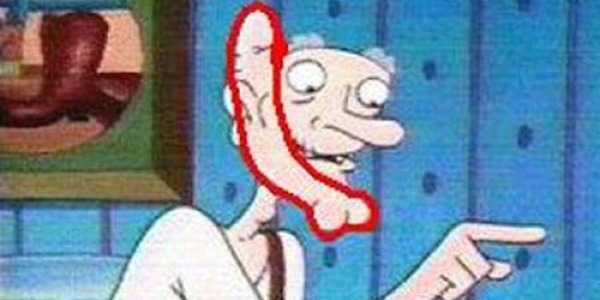 Squidward doesn’t wear pants because his penis is on his face. Let’s face it, everything that we thought about our childhood cartoons being innocent, clean fun is out the window.

These animators didn’t know it, but eventually, we’d all grow up to understand exactly what we were staring at on those TVs.

Whether we were watching an after-school episode of “SpongeBob SquarePants” or a commercial for an episode of “Care Bears,” all of these shows had some kind of inappropriate hidden agenda.

Thanks to the Internet, we can all go back and recap exactly how absurd some of these cartoons actually were. Would you want your little sister, brother or child watching these kinds of things?

After all, “a child’s brain is like a sponge,” right? Check out the photos below, you won’t believe your eyes.

Why did a giant fish have to squirt on the “Magic School Bus”?

Is it appropriate to make Jerry swim up Tom’s butt?

Seriously? You animators aren’t even trying to be discreet here. Miley Cyrus isn’t to blame for the existence of twerking. Our childhood cartoons are.

How was this type of stuff even allowed to be on TV? Let’s just say that whenever the Angry Beavers decided to “wrestle” each other, they didn’t “wrestle” at all.

She was positioned way too low to be kissing his mouth.

Everything was perverted back in the 90s. This is just proof.

Here’s how you ruin “Toy Story” for everyone: When innocent cartoons weren’t being sexualized, they were being racist: SpongeBob SquarePants blew up condoms to form Squidward and you didn’t even realize it. Shocked? Technically, Rocko was a sex worker. This is self-explanatory. Thanks Cinderella! The Powerpuff Girls figured out the male species before anyone did. Eh, Helga was always a bit weird. Are you surprised? Explain this though, Donald! That awkward moment when you realize Timon and Pumbaa were narrating a sex scene. That time Buzz Lightyear got a boner without getting a boner.

Oh, “Harry Potter,” how innocent… Wait, these are awkwardly placed footsteps. What were they really doing?!

Before you knew what “accidents” were… Nick At Nite, where the teachers’ names are sexual innuendos. Wow, the Care Bears must really care about each other. I bet you didn’t even notice that was a crane.

There you have it. Childhood ruined.