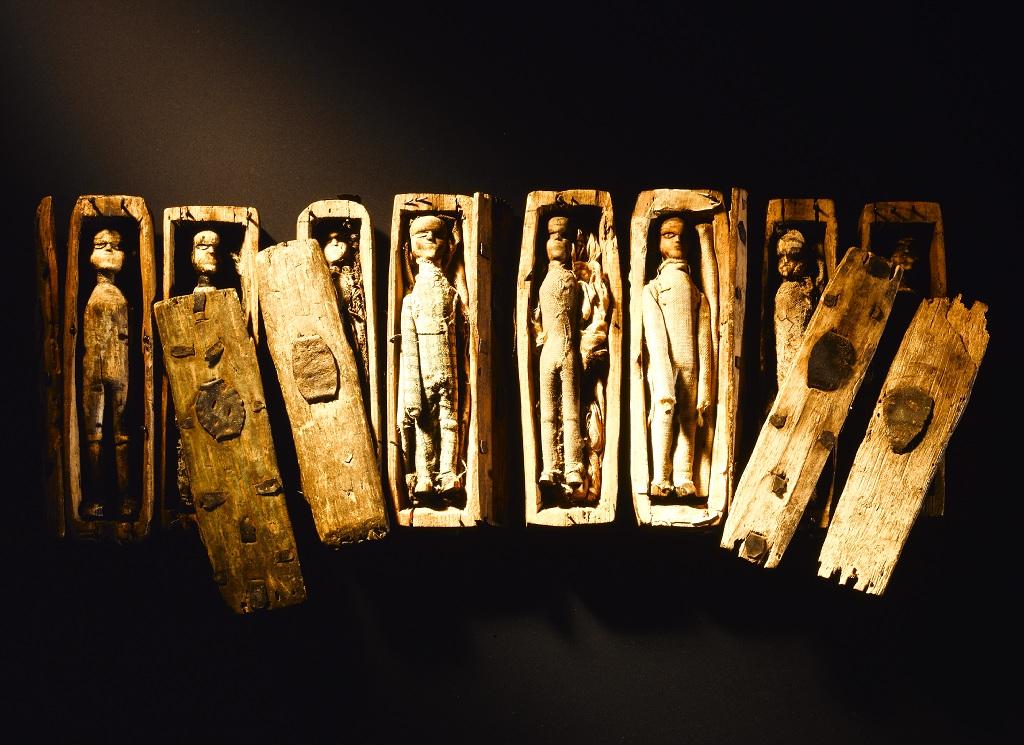 Set in Scotland’s magnificent capital, Edinburgh, Murder dolls is a tale of serial killers, Bodysnatchers and grisly science. The story begins on a misty morning in 1836 with the discovery of 17 miniature wooden coffins. Inside each one, is an eerie, dressed doll. The discovery of the dolls has led to some interesting theories – everything from the work of a madman to tales of witchcraft. But some believe that Edinburgh’s miniature coffins may be connected to Scotland’s most notorious serial killers –Burke and Hare – two Irish laborers who murdered seventeen victims in the 1800’s. But how are the dolls connected to the 17 murder victims – and who made them?
Burke and Hare are notorious even today, but in the time of Ghosts of Albion their crimes are a matter of relatively recent memory. Their murder spree, known as the West Port murders, began in Edinburgh from late 1827 and continued for most of 1828. Their victims were drugged and suffocated to keep them intact; the bodies were sold to a Dr Robert Knox for dissection. In the end, a neighbour discovered the body of their last victim and alerted the police. However, the evidence of murder wasn’t actually that good, and Hare was offered immunity if he confessed and testified against Burke. Burke made his own confession – in which he claimed that Dr Knox knew nothing of the origin of the bodies they sold him – but was sentenced to death and hanged in January 1829.
Less well known is that Burke’s lover (Helen M’Dougal) and Hare’s wife (Margaret, née Laird) were also implicated, though they were released for lack of proof – both narrowly escaped death from an outraged public – M’Dougal is thought to have left the country, while Margaret Hare’s dropped off the map. William Hare also dropped off the map, though popular folklore invented a variety of painful ends for him. Despite Burke’s claim that Dr Knox was not involved, the scandal destroyed his reputation in Edinburgh, and he went to London, and died in 1862. At first theories on the dolls significance ranged from witchcraft to child’s toys, but eventually it began to seem that the 17 tiny figures could be effigies for the 17 murder victims a decade earlier.
Between 1827-1828 William Burke and William Hare lured in and murdered their lodgers in a scheme to provide fresh bodies to the local anatomy school. Dr. Robert Knox, a brilliant and well known local anatomy lecturer purchased the bodies, and most likely knew that something was a bit suspicious about his supply chain.

The crimes were exposed when another lodger discovered the body of a previous tenant, and reported it to the police. Burke and Hare were apprehended along with Burke’s mistress, Helen McDougal, and Hare’s wife, Margaret Laird. Despite finding the body of this last lodger in Knox’s classroom, ready for dissection, the evidence was not truly damning until Hare turned on Burke, and gave a full confession. William Burke was hanged in Jan, 1829. His body was handed over for dissection, and his skeleton and a book bound from his skin remain in the collection of the Royal College of Surgeons, Edinburgh.
The four inch long dolls were in the hands of a private collector until 1901, when eight of them were handed over to the the National Museum Scotland, where they can be visited today. Although it is generally agreed that the mysterious little dolls are associated with the crimes of Burke & Hare, no one is certain who among the killers created them. DNA studies conducted in 2005 using DNA extracted from Burke’s skeleton attempted to prove that they had been created to assuage the guilty conscience of William Burke, but the test proved inconclusive, so the truth of their creation may never be known.

At the time, the medical schools had a shortage of bodies to use for dissection. They were only allowed to use executed criminals and criminals were being executed less frequently. Doctors were sometimes resorting to purchasing bodies from so-called body snatchers or, more accurately, grave robbers. It appears that one Dr. Knox of the University of Edinburgh was not averse to purchasing the bodies of murder victims, either, though it is not absolutely certain that he was aware of the fact when he started doing it.
Before 1832, there were insufficient cadavers legitimately available for the study and teaching of anatomy in Britain’s medical schools. As medical science began to flourish in the early nineteenth century, the demand for cadavers rose sharply, but at the same time the legal supply failed to keep pace. One of the main sources—the bodies of executed criminals—had begun to dry up owing to a reduction in the number of executions being carried out in the early nineteenth century. The situation of too few corpses available to doctors for demonstrating anatomical dissection to growing numbers of students attracted criminal elements willing to obtain specimens by any means. As at similar institutions, doctors teaching at the Edinburgh Medical School, which was universally renowned for medical sciences, relied increasingly on body-snatchers for a steady supply of “anatomical subjects”. The activities of these “resurrectionists” gave rise to particular public fear and revulsion, but, such were the financial inducements, the illegal trade continued to grow. It was a short step from grave-robbing to anatomy murder.
After selling the body of the deceased tenant, Burke and Hare realized that they could make a living off selling the bodies of the dead. They were making less than the equivalent of 1,500 USD in modern currency per body, but that was enough to compel them to kill 16 individuals. Many were killed by smothering, though one was given a medication overdose and a little boy had his back broken. Eventually, a tenant found a body underneath a bed at the boarding house and turned the pair into the police. The body was gone by the time the police got there. However, Hare made a deal and told all in exchange for his freedom. Burke was executed and dissected publicly and several of his body parts, included a death mask of his face, were saved. Hare walked. No one knows what happened to him.
The dolls discovered in the cave numbered 17. They also appeared to represent each of the bodies sold to Dr. Knox — who was not charged with any crime. The dolls are roughly 4 inches long each and have their own individual coffins. Dating puts them around the same time as the murders and many assume that one of the killers is responsible for carving the dolls. Modern DNA testing conducted on the body of Burke and on the dolls found no connection, but that is because there was nothing to find on the dolls after all this time.

In this article:Burke and Hare, Murder dolls, witchcraft