When I started doing some research into ancient giant skeletons found in caves and those who have theories of a hollow earth and societies living deep in the earth through cave systems, I began to have a lot of questions about what else might be happening caves. Then, I started discovering more and more cases of Lizardmen, Bat-women and all kinds of wild beings. Let’s cover some of these freaking scary cases –

At my favorite site for collecting witness accounts, Phantoms and Monsters, you find stories of an Austrian geologist who encountered Lizard people in a cave and some spelunkers in Missouri who also ran into these Lizard people. “About 30 ft away they saw two creatures, one was very tall (at least 7 ft, maybe more) and very powerfully built and reddish in color. The other was smaller (about 6 ft tall) and was a pale, almost albino color. This one was not as powerfully built as the other. Both beings resembled large reptiles.”  Both described similar organized groups, living down there, even using technology. 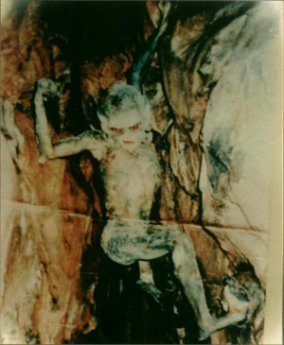 Ghoststudy offered an interesting posting about this picture above.  The report was a man went into a cave, a flash went off, screams were heard and he wasn’t found, but his camera with this photo in it was.  Later, this story was discovered to be an urban legend hoax. It was a display that was briefly lit by a flashing light and someone took a picture of it.

Some of the more interesting cryptids that show up in stories around the world including a 4-foot spider in caves deep in the African Congo.  How about a 12-foot bat reported in West Africa? 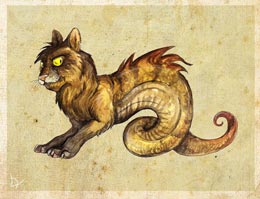 Stollenwurm is a Swiss monster described as 2-6 feet long, a lizard with the face of a cat, and scales all over, believed to live in Alpine passes and can stand up to threaten others.

If you like dinosaurs, Papua, New Guinea has the Ropen, a supposed enormous prehistoric bird said to live in caves.

Wichtlein and Tommyknockers, both gnome-like fellows said to inhabit caves.

Ancient giant skeletons were found in caves in the western USA and said to have lived in underground caves throughout southern California.

From the land of my grandmother in Swedish Lapland, the Uldru were said to burrow underground and when the nomadic lapps set up their camps, if they heard them digging, they left. They were considered to be troublemakers.

For the best collection of cave monsters on the Internet, check this link.

I find this fascinating because who isn’t creeped out by caves and the unexplored ones especially. I believe that caves definitely hold cryptids, what kind I can’t say, but it is a most excellent place to retreat, be protected from the elements, and rarely come upon.

The Descent: Women descend into cave with humanoid cryptids 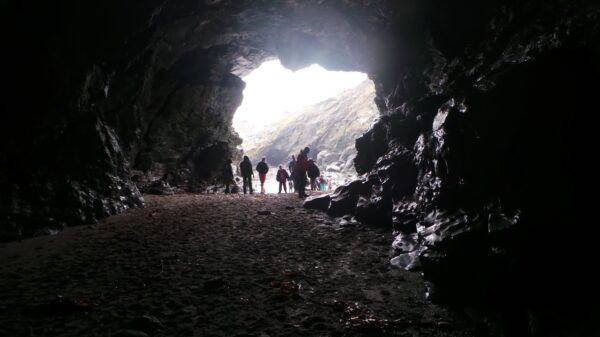 Lyle Lyle Blackburn is the author of a number of excellent books, including Lizard Man, The Beast of Boggy Creek and Beyond Boggy Creek....