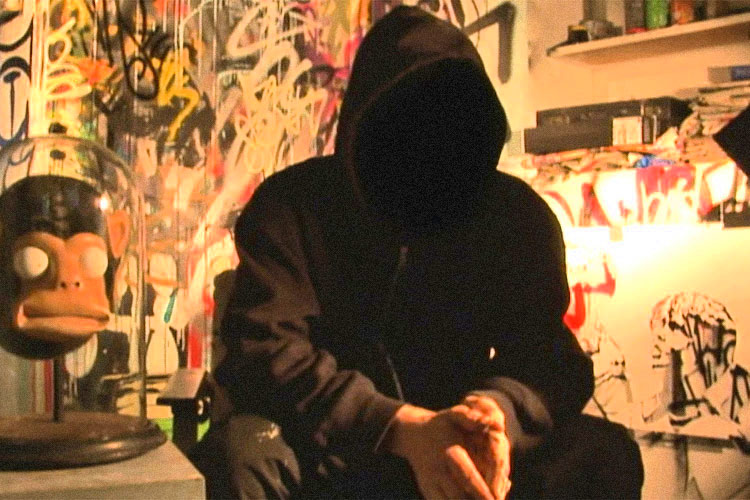 “When the system got involved in the Banksy myth, they’re quite happy to put it on the front page of The Daily Mail. It doesn’t happen if you’re a true revolutionary. They don’t do that.” ~Michael Shurman

The world desperately needs an anti-hero, but in our consumer world of fake news, fake foods, and fake creativity, the artist known as Bansky has come to play this role by harassing the establishment and the status quo with cutting wit delivered in the form of street art.

But who is Bansky? Is Banksy even a single, real person? It would seem that with so many Banksy art projects popping up all over the world, including theme parks and hotels, that Banksy is now more of a consumer brand. Something that is being mass-produced for the masses, so that the masses can carry on with business as usual with the comfort of knowing that someone else is waging the revolution, and they don’t have to. In other words, Banksy has become just another symbol of consumerism; the very thing Banksy is supposed to be standing against.

In recent years a number of people have come forward claiming to be the real Bansky, but so far, none of them have yet to be proven as the real thing. After all, with so  much hype and so much mass produced Banksy art, it would be ridiculous to think that one shadowy individual can pull it all off without being outed on today’s internet. But hey, Santa Claus is also very popular.

The Banksy brand is worth millions today, and someone is cashing in big time. It’s not Michael Shurman, though, a Glastonbury, UK artist who has for years claimed to be the original Banksy. That is, the one who started all the hype by producing thought-provoking street art which got the attention of major media and the UK art scene.

In a recent interview, podcaster Jason Liosatos interviews Shurman, who discusses how the myth of Banksy was stolen from him and then fostered into the global brand we all see today.

So, is Shurman the real Banksy? You decide, but what is clear from this interview is the reminder that we live in a world where corporations and hustlers steal ideas from people in order to cash in on someone else’s creative genius. In the interview, Shurman says that the name Banksy is a code for for making money. That is, once people in the art world realized that

He says he’s been blacklisted and threatened by the art community for trying to spread the truth that Banksy is just another marketing tool to cash in on people’s emotions and desires. He believes Banksy is now a conglomerate, or a think-tank, of a number of marketers who come up with the politically and socially challenging pieces in order to make money.

And it’s working. Banksy art is now being bought up by celebrities and has gone totally mainstream in all the major corporate press. Just recently a piece was sold at an auction then self-destructed, creating massive publicity and even greater brand awareness. Banksy is a gold mine in the art world.

We live in a culture that is constantly being raped and plundered by corporations. Anything original created by real people is co-opted and stolen and repurposed for mass appeal, then sold at the highest price the market will bring. In short, we are cultural slaves to a world focused on money, and if Shurman is the original Banksy, his story fairly describes this cultural dynamic.

As Shurman points out, true revolutionaries are not supported by the mainstream media, as Banksy is today.

So, is this the real Banksy? You decide, and leave a comment below.

This article (UK Artist Reveals Himself as the Original Banksy – Explains Why True Revolutionaries Are Never Mainstreamed) was originally created and published by Waking Times and is published here under a Creative Commons license with attribution to Vic Bishop and WakingTimes.com. It may be re-posted freely with proper attribution, author bio and internal links.