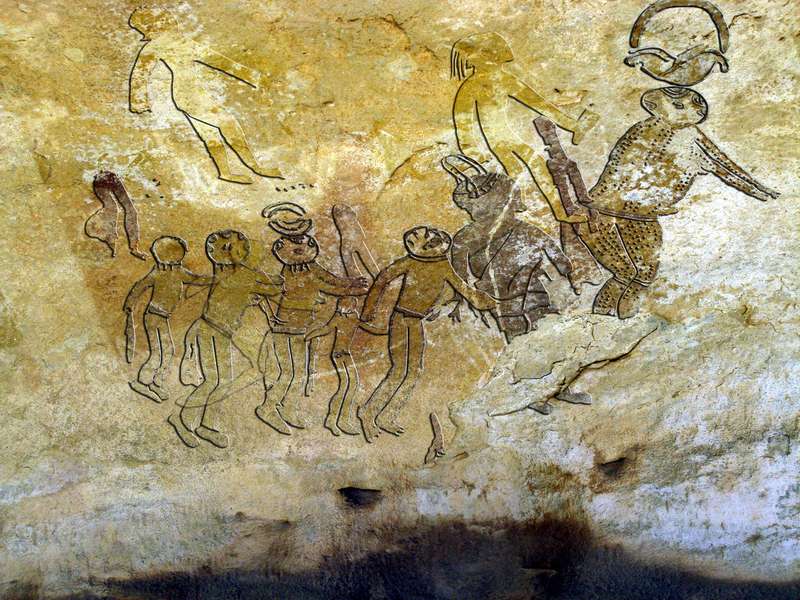 The appearance of fiery chariots and hovering discs in Renaissance Era paintings – as well as beings working their controls and/or attired in garb that we commonly recognize today as spacesuits – proves, at least, that UFOs were being sighted in medieval times. While no direct connection can be isolated from this, between space aliens and religious icons, there certainly is a lot of supernatural phenomena associated in and around these depictions. The common images of one or more hovering saucer shaped metallic craft, often with highly intense beams of light emanating from the bottom, intelligently controlled and traveling at outrageous speeds – as if the artists witnessed these things first hand – are not in any sense ordinary events, even in modern times. It is extremely hard to find mention of these events, but they do exist – as scattered fragments, vague remnants, survivors of censorship.

One possible explanation is that these paintings were commissioned (by the church or the state) to place these phenomena in a deified context. Officially declared to be the vessels of angels, the peasants would ask fewer annoying questions – that likely, the clergy of the day had scant answers for themselves. It is likely that ancient UFO sightings coincided with important historical and political events – and just as likely that the sightings impressed, or pressured, leaders of the day to take bold, or unusual actions.

One set of images depicts a late 8th century battle, in which Saxon Crusaders besieged and surrounded the people of Sigiburg Castle, in France – when suddenly a group of saucers appeared in the sky, apparently hovering over the top of the church. The Saxons fled, believing that the French were being protected by the “flaming shields.”

It was a very superstitious time – but people, as today, knew what they saw – though they probably had little context to associate with it. While there were certainly no flying machines (designed by humans) in those times, there were sailing ships – people were familiar with portholes. Some depictions illustrate these and other classic UFO details – begging the question: what did the ancients think of flying saucers?

An unusual source of UFO evidence in Ancient Art can be found in artwork which stretches back over thousands of years. It often seems to contain “anomalous” figures and extraterrestrial craft. Even with such a large amount of evidence available it is hard to understand what the artists were trying to depict.

A cave painting from Val Camonica, Italy dated 10,000 BC appears to depict two beings in protective suits holding strange implements. Another cave painting from Tassili, Africa shows humanoids wearing round helmets with a disc flying in the sky. This dates from 6000BC. There are further UFOs on per-renaissance paintings.

A 15th century tapestry entitled “The Magnificat” from Burgundy depicts the life of Mary, mother of Jesus. However in the background is a flying hat shaped object and there is no explanation of its appearance. One of the most startling anomalies appears on a Yugoslavian fresco entitled “The Crucifixion” which was painted in 1350. Two objects can be seen on the painting, resembling flaming stars with a person inside. They look like spacecraft with a pilot!

What seems evident in all of the weird and wonderful examples of these kinds of paintings is that the artists witnessed, or at least were aware of, sightings of aerial phenomena.

There were no airplanes, weather balloons, or experimental military jets to explain away the UFOs native to the skies of the pre industrial aeons. Events such as these would not have been as easily dismissed. Would those who witnessed such craft or encountered such beings first hand, be feared as witches, seen as cursed ~ or even blessed? A medieval abductee might descend from the mountain saying, in a reverent but dazed tone, “I have been touched by the angels.”

In this article:Paintings, Religion, UFO