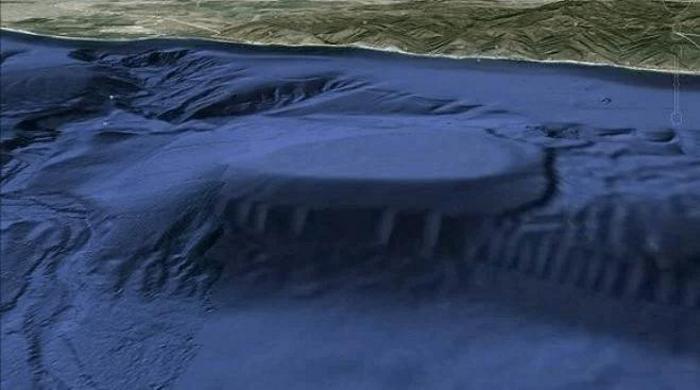 Off the coast of Malibu (California) in a place that ufology calls the “Holy Grail”, a large structure of unknown origin was discovered at a depth of more than 100 meters. The structure is so large that you can even see it from a satellite: you can use the Google Earth program.

Ufologists have been looking for this structure for more than 40 years. According to unconfirmed reports, observations, studies and photographs of unidentified flying objects (UFOs) were carried out in this place.

There are several theories regarding this building. Some believe it is the base for the US Navy’s submarines. However, ufologists are sure that this is a secret “base” of aliens or even an alien ship that crashed many years ago.

This is confirmed by strange signals emanating from the object, which are directed into space. The very same “plate” has a flat surface, about five kilometers wide. From satellite images, you can understand that it stands on something that looks like columns, the height of which exceeds 150 meters. The entrance to this structure was never found.

Malibu is a place that, probably, every person wants to visit. It is very popular with the rich and famous. However, not only people love him, but also aliens. In the 50-60s of the last century, a large number of UFOs were recorded there, which entered the water at high speed. Vacationers gathered every day on the beach in the evenings to see with their own eyes the objects that were constantly rising and falling from the water.

In this article:Califirnia, UFO base