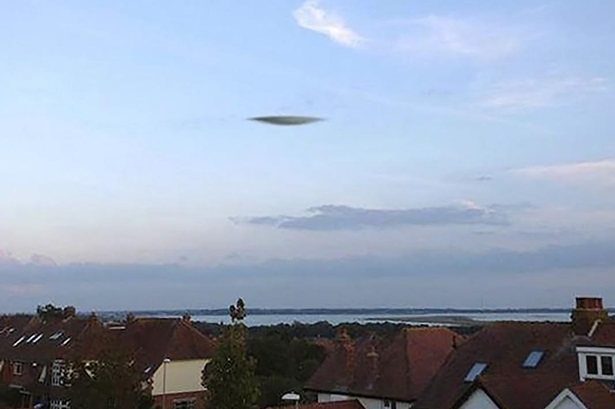 The fast-moving disc-shaped object baffled residents after it was seen speeding through the skies near Portsmouth.

This UFO has left observers baffled after it was spotted flying over the south coast of England.

The fast-moving disc-shaped object was seen speeding through the skies near Portsmouth.

The sighting has led to speculation on Twitter over what it might be – but a Met Office expert has ruled out suggestions that it could have been a cloud.

Johnny Blackwell, 23, of Southsea was one of several people to see the UFO.

He said: “I don’t believe in UFOs, but when I saw this I didn’t know what it was.

“It didn’t look like a cloud, and it was moving very fast. It was a grey, disc-like shape, which I know sounds like a stereotypical UFO, but that’s what it looked like.

“I don’t know much about military craft, but this was very fast-moving and very odd to see.”

Johnny, a student, said he saw the object at about 7pm on Tuesday.

Another observer who didn’t want to be named was just as bemused saying: “My initial thought was it was an aeroplane, but it was just moving too quickly.

“I was the only one that saw it but was quick enough to take the picture.

“I definitely believe in UFOs and am very interested in science fiction, and often look up at the sky in the evening wondering if there is anything or anyone else out there.”

Some people on Twitter said the UFO is a cloud, but weather experts have dismissed this.

Laura Young, from the Met Office, said: “After looking at the images, I can say the object is nothing to do with the weather.

“It is not meteorological and is not a cloud.”

Karen Masters, senior lecturer in the institute of cosmology and gravitation at The University of Portsmouth, added: ‘Given the pictures show a dark object against a daytime sky, it’s clearly not an astronomical object.

“Many UFO sightings are the planet Venus, but this one can’t be that.

“The distances in space are so vast that it’s just not possible for aliens to be visiting Earth, so any interpretation suggesting this is an alien spacecraft is clearly wrong.”

In this article:Met Office, Portsmouth, UFO