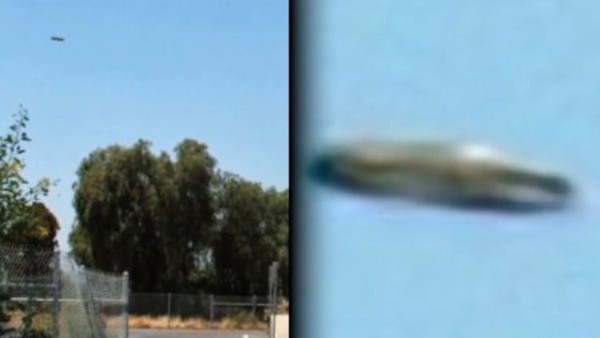 A historian taking pictures of a barn was startled to discover a mysterious extra in one of the shots.
A member of the Santee Historical Society, Ellen Henry had been photographing the historic Edgemoor Barn when she noticed a round metallic object in the sky near to the building while reviewing the images on her camera’s LCD. “I noticed a ‘speck’ on my LCD screen after I took the shot to check for clarity, and only realized it wasn’t a speck when I downloaded it on my computer,” she said.
A local news station attempted to contact two local airfields to see if they could help explain the nature of the object however neither could offer any explanation. “There is no way this was a commercial aircraft,” said Henry. “I would have heard it, especially as low as it seemed to be. Someone did mention perhaps it was a drone. However, I have not seen any drones that were round or oval, and lacking wings, rudders or propellers – even the drone that looks like a fly has wings.”

What exactly did Ellen Henry photograph in the sky above Santee, Calif. , on May 7? “It was clear and certainly not a bug,” Henry told local ABC TV affiliate News 10. Henry is a member of the Santee Historical Society (SHS) located in San Diego County and, according to the SanteePatch, was taking pictures of a historical building, the Edgemoor Barn.
MORE..
In this article:Flying Disc, Paranormal, Santee Historical Society, The Edgemoor Barn, Unidentified flying object, Video