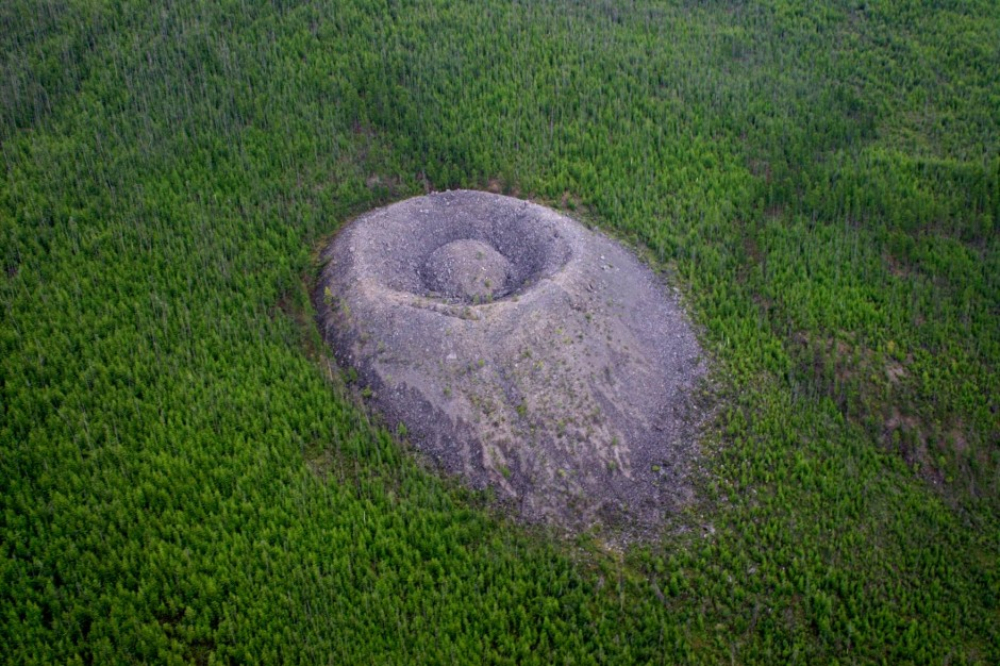 What landed here – a UFO or a meteorite? This 40 meter high geological formation was never thoroughly investigated until the 2000s but Russian scientists seem to have found an explanation.

A gloomy dark mount towers over the bright green landscape of the dense Russian taiga. Looking like a giant speaker – 40 meters high and 100 meters wide – it’s an unexpected site to see in a remote area in the north of Irkutsk region, some 210 km north of the town of Bodaibo.

Until 1949 only a few locals knew about it. They call it the “Fire Eagle’s Nest” and used to think of it as a bad place that even animals avoided. Some who visit this place die a strange death and household animals vanish without a trace. What’s the mystery behind this crater and is there a rational explanation for the all the mysterious activity?

How it was discovered

The scientist who first chanced upon this unique formation was Russian geologist Vadim Kolpakov. In 1949 he came here to conduct research and couldn’t believe his eyes when he saw the crater.

“I thought I was mad,” he recalled. “From a distance it reminded me of a giant pit mine and I even wondered if people were there. Why would they be? This is a dense area of the taiga. Plus there were no NKVD labor camps around here – I knew it for sure. Secondly, I thought that it might be an archeological artefact, but the local Evenk and Yakut people were not ancient Egyptians. They can’t built rock pyramids.”

A closer examination showed that the crater was a large mound made of shattered limestone blocks with a diameter of around 160 meters, with an estimated weight of about one million tons. The crater was coined “Patom” (the name of a nearby river), but wasn’t examined thoroughly until the 2000s due to a lack of funding. The mystery of “Fire Eagle’s Nest” has fueled various theories, from an alien ship landing to an underground nuclear reaction. Some, including Kolpakov himself, supported the idea that the crater was formed by a meteorite falling on the Patom Highland – people thought it might be a fragment of the Tunguska meteorite that fell in the Siberian taiga in 1908. Others suggested that the crater is a volcanic structure that formed due to gas steam jets from a significant depth along fault zones.

The first complex scientific expedition that visited the site in 2005 didn’t get any answers. The head of the expedition died of a heart attack – a tragedy that some believed was a bad omen.

Still, the scientists continued to examine the area. Subsequent expeditions in the years that followed (2006, 2008, 2010) were more successful. Gathered material from the site showed that the crater formed around 500 years ago (way earlier than the Tunguska meteorite) and that it has a zoned ring structure with individual zones formed at different times.

The scientists eventually discarded the meteoritic theory and cryogenic formation hypothesis (suggesting that the cone formed by the freezing of aquifer sequence) and came to the conclusion that the Patom Crater formed by a phreatic (steam) explosion, that happened either during magma emplacement into hydrous rocks or due to the faulting and decompression of heated hydrous rocks.

Despite this, some prefer to believe in more exciting, farfetched explanations like a tiny fragment of a neutron star falling to Earth – so massive that it punched straight through the Earth and out the other side, through the Patom Crater. It’s not completely unrealistic – two similar events happened in 1993 in different parts of the planet, both within a month of each other.

There’s still no explanation for strange events reportedly happening in the crater’s vicinity. Apart from the magnetic anomaly that was detected during one of the first expeditions there is no confirmed evidence that something big is buried in the center of the crater.

Whichever theory one chooses to believe, the crater will most likely remain one of the most mysterious places in Siberia.